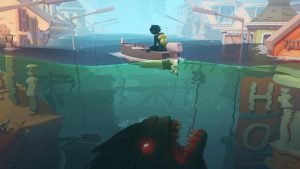 2018 has been a fantastic year for gaming all around, offering some of the most memorable experiences that gamers have yet to have. But while the triple-A world may have seen the wonders of games like Red Dead Redemption 2, the indie game has also made a big splash with outstanding titles such as Dead Cells, Delta Rune and more. With that in mind, here are 10 indie titles (in no particular order) worth looking towards in the upcoming year of 2019.

If you’ve never wanted to be a terrible crime-ridden Goose, I can’t blame you, as I doubt any of us saw the idea coming from miles away, but Untitled Goose Game is thankfully here in due date to correct our mistakes. In this stealth-centred title, players will control the beloved goose as they roam mission based playgrounds, ruining just about everyone’s day- oh, what a delight!

In The Valley Of Gods

I still have fond memories of playing Firewatch for the very first time. Not only was the idea beautifully , but the implementation was even better. Since then, , I’ve been quietly wiping my days waiting for Campo Santo’s next entry – and fortunately, 2019 is the year we’ll finally get it in the form of In The Valley Of Gods. Featuring the same beautiful cell-shaded graphics Firewatch have made us grow to love, In The Valley Of Gods will tell the story of two adventurers who set on a journey to uncover both the world’s deepest secrets, but the deeper meaning in their bonded relationship.

Ori and the Will of the Wisps

With the original Ori, the indie world spoke to the rest of the world to the amusing effort that could be put into creating an experience that was as coherent to play as it was pleasant to the eyes. With its continuation, Ori and the Will of the Wisps brings back the rightfully beloved cute visuals and the engaging platforming with more colours and diverse set pieces than ever.

The original Spelunky set a new standard on what adventure platformers should be, and thankfully, after enough hard waiting, 2019 seems to be the year we will finally receive a proper sequence. Featuring the same style as the first game but with many more levels and cool mechanics to explore, Spelunky seems to be on the right path to deliver the same industry-setting standard again.

While it’s surely unfortunate that Minecraft will never receive a proper sequel, its handful of spinoffs have constantly delivered great experiences. In Minecraft: Dungeons, Mojang is set to build a dungeon crawler RPG in the same universe we’re all so used to today, and while little is known about this title, it’s safe to assume that it will include a typical bit of Mojang story-telling and creative flare that will make it perfect for players of all ages to rejoice in.

Just to set it straight: any game with my name in it has got the fabulous. Jokes aside, My Friend Pedro looks truly promising. Featuring an almost Deadpool type of vibe, this weird physics based shooter will put your creativity to the test when it comes to just how much justice you can bring.

Since its announcement, Travis Strikes Again has been known for its comedic take on the beatem’ups genre, and now that it approaches its launch date, is a better time than ever to get excited. Featuring a fourth=wall between multiple game characters, this unique indie will make for an enjoyable experience that is both great when played solo or with friends.

If I told you that a game about driving a taxi could be made interesting, you’d look at Crazy Taxi and call me insane, but Neo Cab may have just achieved the impossible. Featuring a futuristic sci-fi setting, this game revolves around the weird social interactions that happen between driver and passenger, leading to some awkward yet amazing conversations. If you haven’t had enough of a social life within your gaming world, then Neo Cab looks to be the perfect fix to that issue.

I’ll be the first to admit that I was sincerely impressed with the quality that EA’s original’s program was able to deliver, and after the gorgeous looking A Way Out, my expectation for the program suddenly tripled. With Sea of Solitude, EA seems to be bringing us a Rime-esque experience, focusing on a calm yet deepening adventure revolved around the sadness revoked by the heartbreaking experience that is pure loneliness.

Many have complained that the survival genre is quickly getting stale, but Atomic Heart may just be the salvation the genre needs. In this futuristic recreation of the USSR, players are charged with making the best of their environment to survive everyday dangers ranging from deadly zombie hordes to gigantic robots. Besides its unique setting, Atomic Heart also strives for uniqueness by re-inventing the typical combat cycle, now offering multiple fast-paced movement options, such as dashing, to make killing hard foes a hard-earned breeze.

With 10 diverse, but quality-looking indies, the year of 2019 is sure to be slouch for Indie lovers, and with the increasing notoriety of independent projects in the past year, we can be sure that more outstanding titles like these will come to follow.

The post Top 10 Most Anticipated Indie Games of 2019 appeared first on CGMagazine.