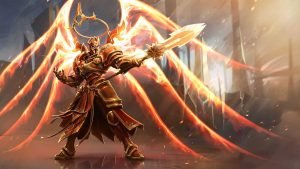 Imperius just got introduced to the Heroes of the Storm PTR today, and the Aspect of Valor is ready to charge into the Nexus just like he did against the demons in Diablo.

The newest hero is a bruiser who targets his opponents with his strengths in dueling, initiation, and crowd control. For example, with his first basic ability, Celestial Charge (Q), he lunges at enemy Heroes and stuns them. It can also be used to move through terrain at dire moments, or even as a method of escape.

A storm is coming
Crunchyroll – How to Watch Anime Onli…
Why Do I Have These Thoughts?
The Punisher: A Timeless Character
Langa Mavuso – Sunday Blues

His next basic ability is Solarion’s Flare (W), which releases a fiery wave to damage his foes. Those who get hit by the centre of Solarion’s Flare take bonus damage and are slowed for a few seconds.

Next up, Molten Armor (E), shrouds Imperius in flames, which can hit nearby enemies and heal him for the damage dealt.

His trait, Valorous Brand, marks enemy heroes when they get damaged by his basic abilities. Enemies can be marked up to three times, and basic attacks consume the marks to deal bonus damage.

As for Imperius’ first heroic, it’s Angelic Armaments (R), which gives him a shield for a few seconds. If the ability lasts for its entire duration, then Imperius can reactivate it to launch swords that deal damage to the first enemy they hit.

His other heroic is Wrath of the Angiris (R), which lets him charge at a direction and lift the first enemy hero he hits. While the enemy hero is in the air, Imperius can control the landing location before slamming them down and stunning them.h

Heroes of the Storm players who cannot wait to become a defender of righteousness are encouraged to test out Imperius in the PTR.

The post Heroes of the Storm: Imperius Charges Into The Nexus PTR appeared first on CGMagazine.