Most Anticipated Xbox One Games of 2019 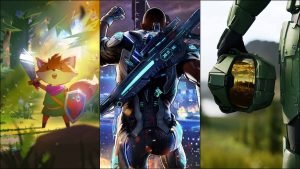 Just like in 2017, Microsoft’s Xbox One struggled to stay relevant this year. It’s most anticipated release for the year, Sea of Thieves, had the dubious honour of being the first major disappointment of the year, leaving Forza Horizon 4 as the console’s only desirable exclusive for the year. Indeed, the Xbox One is not in a great place right now, but that’s slowly changing. During their E3 2018 keynote presentation, Microsoft’s Phil Spencer stated that they’re committed to bringing more quality titles to the console, and it looks like that initiative will kick-off with 2019’s crop of exclusives. (All of which will be available through the Xbox Game Pass)

Crackdown 3 has been a highly anticipated game for a very long time now. So long in fact that Microsoft had to release a statement in early 2018 reassuring fans that the game hadn’t been cancelled. Well, after years of delays and long bouts of media silence, Crackdown 3’s time has finally come. The mayhem returns this February, and it’s supposedly more bombastic than it’s ever been. Terry Crews will be lending his voice to Commander Jaxon, the new agent fans will be playing as in their efforts to take down the Terra Nova organization and save the world. Jaxon has been given the authorization to achieve his goal by any means necessary, so players should make sure to put all their new powers and weapons to full use. Crackdown 3 will also be introducing multiplayer to the series with “The Wrecking Zone,” a mode the pits two teams of five against each other in fully destructible environments. The wait’s almost over, so get ready to unleash chaos in the name of justice!

It’s probably safe to say that nobody ever expected to see another game. The NES original is close to thirty years old now, and it’s existed mostly as an internet joke for the last five years or so. That said, Battletoads was decent enough for its time, and there’s no denying its oddball charm. Neither Microsoft nor Rare have given up any details since the game’s E3 reveal, but it looks like Battletoads 2019 is aiming to offer an improved version of the original’s gameplay. Hopefully, they remember to turn-off friendly fire.

Sea of Thieves: The Arena

As mentioned above, Sea of Thieve did not have the best launch back in March. The game was widely praised for its pleasing art style and absolutely gorgeous water, but was just as heavily panned for its lack of substance. Since then, Rare has steadily improved Sea of Thieves with substantial free updates, and The Arena looks to be the biggest one yet. Arena is a competitive mode wherein crews compete for treasure hunting supremacy. Sea of Thieves has been sorely lacking in terms of giving players a reason to fight one another, so giving it a dedicated game mode will definitely be a major boon for Rare’s high-seas adventure game. After all, many gamers have wanted decent ship to ship PvP for a long time now. What better way to bring players back than simply giving what they were asking for all along?

Cuphead fans got a pleasant surprise during E3 2018 when StudioMDHR dropped a trailer for an upcoming expansion to the game. The Delicious Last Course certainly earns the “expansion” designation too, as it’s set to add quite a bit of content. When this expansion eventually drops, fans will have new weapons and abilities to enjoy, a brand new island to fight their way through, and a brand new character to fight alongside with. The new character in particular, Ms. Chalice, should be exciting because she has her own take on the standard Cuphead moveset. As for their motivation, it’s likely that it has something to do with the jolly Chef Saltbaker. Something seems off about that guy.

Gears of War 4 brought the old human and locust horde to a new generation, saw the rise a new COG and the Swarm, and introduced a one last mystery regarding the fate of the Locust and their queen. Gears 5 will see the new generation of heroes set out to solve this mystery and hopefully find a way to prevent the Swarm from becoming a threat on the scale of the Locust or Lambent. This entry in the series looks like it’ll be a bit more open and varied than its predecessors, with its characters pushing their way through everything from lush jungle to frozen tundra as they progress along their journey. Additionally, Microsoft intends for this to be the most visually striking Gears game yet, promising an experience delivered in 60fps and 4K resolution for 4K-capable machines.

Halo: Infinite’s reveal wasn’t exactly clear about what the game actually is, and there are still plenty of blanks that need filling in. That said, 343i has confirmed that Halo: Infinite is in fact the next chapter in Master Chief’s story, so fans can at least expect the game to focus heavily upon Spartan John-117. It was also confirmed that Halo: Infinite will indeed have multiplayer and that players will be able to customize their personal Spartans in a manner that’s closer to Halo: Reach than Halo 5: Guardians. For now, it also looks like Halo: Infinite will feature neither loot boxes nor a battle royale mode, not right away at least. This leaves room for a potential return to the series’ gameplay roots, something longtime fans will certainly appreciate. Here’s hoping this will be the return to glory all us Halo fans have been waiting for!

Ori and the Will of the Wisps

Ori and the Blind Forest was a very competent adventure platformer and remains one of the most stunningly beautiful games available on the Xbox One to date. Fans have been waiting patiently for its sequel since it was teased back in 2017, and it looks like the wait will be well worth it. Ori and the Will of the Wisps appears to be doing what every great sequel should: taking the best parts of the original, building on them, and then adding even more. The world on display in its E3 trailer looks bigger and more complicated, Ori has more abilities at its disposal, and he’ll have to use them in order to confront even larger and more terrifying enemies than last time. Indeed, a forest spirit’s work is never done.

TUNIC is more or less just what it looks like: an isometric, Legend of Zelda-ish adventure game starring an adorable little fox in a tunic. Little information is available about this one outside of its E3 reveal trailer, but this already looks like an adventure worth taking. Its visuals are distinct and bright; its world is rendered beautifully; its enemies look like they can pose a real threat, and every corner looks like it could be hiding an exciting discovery. Even its story elements wind up being minimal (and they definitely could be), TUNIC’s atmosphere and gameplay look like they’ll be more than sufficient. Adventure game fans would do well to keep this one on their radar.

The post Most Anticipated Xbox One Games of 2019 appeared first on CGMagazine.

This post first appeared on CGMagazine, please read the originial post: here
People also like
What does jackfruit taste like - lovelcute
Trivial Proof of the Collatz Conjecture
What Makes Roulette Such a Great Game?
Afterthoughts Part 2 Good and Evil
Get 3 Months Of Xbox Game Pass For Just $1/Rs. 50, Also Available For Existing Subscribers

Most Anticipated Xbox One Games of 2019