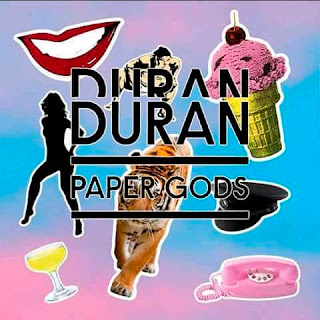 Greetings, Darlings! Stand back and get ready for the first Phat Unicorn Music Review! ::and there was much sparkly rejoicing::
I have such mixed feelings as I write this review. I go into it knowing that some of you will violentlydisagree with me, because I’m about to poo all over one of your (and my) favorite pop icons. That’s right, DURAN DURAN and their newest album, ‘Paper Gods’. ::squeeeee!!!::

Who doesn’t love Duran Duran? What’s not to love?! 80s glammy/New Romantic superstars, whose meteoric rise was responsible for 80% (or more) of the popularity of MTV, and whose lipsticked, often-pouty faces graced the walls of many a young person – including your favorite sparkly Unicorn.

Empire of Language- Prelude-Metaphors…
I was nervous about switching therapi…
You Say Covid-19, I Say Hangar 18!
Exhibit D: Lipstick and rifles--Ukra…
فوائد الأرز البري لصحة الجسم
As a lifetime fan, I was pretty excited about this album - especially in light of just how much I LOVED their last album (All You Need Is Now) a few years ago. I pre-ordered the deluxe version (the one that came with a nifty t-shirt). I avoided listening to any of the digital songs until the actual CD came, just so I could physically put it into my laptop and listen. I was so ready for a new injection of D2. I threw on my headphones and hit ‘play’, and –
...felt SO disappointed.
AYNIN was brilliant, the perfect evolution of the ‘Fab Five’, bringing the heart of their Music into today. They never really ‘went away’, of course. Newer, dare I say youngerbands came along and stole the fickle hearts of the newer generations, as always happens, but the hardcore fans – like yours truly – were still there. And I’m sure I was not the only one salivating at the chance to hear another album that would go instantly onto ‘repeat play’, to lift us up and take us to that special place their music has always done.
Paper Gods is not that album.
I feel like apologizing for saying this, but it just felt - ordinary. Not 'It's still Duran Duran, even if it's not their best work' ordinary, but 'don't care who it is, wouldn't stop to listen to it if I heard it on in a store and didn't know Simon leBon was singing it' ordinary. Almost unfinished. Wait, no. Not unfinished – uninspired. What went wrong?
Some have said it’s their insistence on ‘trying to keep up with the times’, but I reject that. It doesn't sound to me like they're trying too hard to be modern (although having LiLo featured on one track, and having other celeb guest stars in does suggest it a bit). It fails to sound modern, either. It's just - and it kills me to say this - kind of a 'meh' album. The kind that the die-hard fans will buy anyway, but that will end up sitting on the shelf gathering dust while we put AYNIN back into rotation in its place.
Oh, well. They’ve had a lot of hit albums, several of which I would consider among the best albums I’ve ever bought. Maybe the next one will be better. At least I got a nifty t-shirt out of it. ::shrug::

And a special note directly to D2, with all of my respect and love: Guys - you're geniuses, and what you've given the world musically can never be taken away. Keep making music - but quit overthinking it and just do what comes naturally. I can NOT believe that this album is that. It's just so - forced and awkward. And this from someone who has adored you since 1980... We know you can do better. Much love.

Phat Unicorn! Rating: 'Meh'.
---
Have you listened to Paper Gods yet? Do you feel the same, or does your opinion differ? Either way, I’d love to hear from you! Unicorns love comments.

Thanks for reading, and always remember to sparkle like you MEAN it!