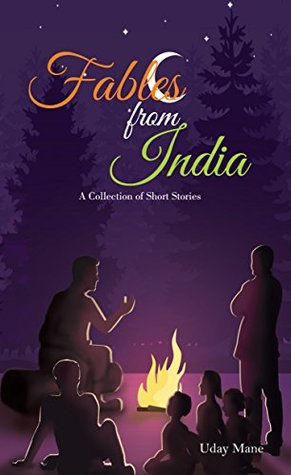 The blurb says:
A King's negligence costs the Prince his eyes. How will the King make amends?
A farmer is torn between resurrecting his wife and upholding his duties. What will infuence his choice?
A jester lives two lives - Masked for others. Unmasked for himself. His masked side brings happiness to everyone. But what brings happiness to his unmasked side?
A magnificent tree bears fruits of different kinds, but the King wants it to be cut down to serve justice. How will the tree defend itself?
An orphan boy is in search of the world's bestselling book. Will he eventually find it?
A dog struggles to uncurl his tail. Will he break the curse that curled his tail in the first place?
A young boy and his pet lamb are separated from each other. Will their friendship stand the test of time?
Set in the ancient times, Fables from India, is a collection of 22 profound and unheard stories from a country known for its storytelling.
I received this Book from Leadstart Publishers in exchange for an honest review.

Reading Fables from India by Uday Mane felt like I was reading some folk tales – simple, short, easy to understand and with a moral message. To give you an idea – the Stories in this book are like those in Panchatantra.

Did you know what exactly are fables?
Wikipedia says --

Fable is a literary genre: a succinct fictional story, in prose or verse, that features animals, legendary creatures, plants, inanimate objects, or forces of nature that are anthropomorphized (given human qualities, such as the ability to speak human language) and that illustrates or leads to a particular moral lesson (a "moral"), which may at the end be added explicitly as a pithy maxim.

This is the kind of book I would like to keep aside for my son to read when he grows up and takes to reading. Having said that, I must add that if you are into reading serious and complex short stories this book might not appeal to you. The stories are way too simple and straightforward for adding some depth to the characters or for adding some unexpected twists and turns to mundane plots. But, if you are like me - who read slow and ponder over what you have read, you may well revisit your moral science lessons and see how well you are applying them in your life now.

The book can do well if it is targeted to young readers between the ages of 8-12 years. Adults may read out these stories to their kids for some moral lessons.

There are 22 fables in the book are about kings, queens, common people, animals, life, death, and magic. Some of the ones I liked reading includes – "The Farmer and the Magic Objects" in which a husband seeks to resurrect his dead wife, "The Sacred Tree of Khamur" in which a tree speaks to appeal to a king to change his verdict, "A Night for the Demon" where a queen leaves her husband every fifteen days to spend a night in the jungle, "At Heaven’s Gate" where a child asks God why he took away his father from him. There were some more stories with profound messages and were a pleasure to read, but there were a couple of them which I couldn’t appreciate much - like The Jungle laws and Langu’s Calling.

One thing that didn’t work for me after reading this book was the title of the book. When I saw the title – Fables from India, I was really hoping for some profound stories from the land known for its story telling. But, I was a bit disappointed there. More than half of the stories didn’t seem to have any connection with India, or even ancient India as a matter of fact. Some seemed to be from Persia or Middle East, while some felt to be universal. So, I think the book could have been better named.
Overall, a light read that you can read or read out to your kid as bedtime stories.