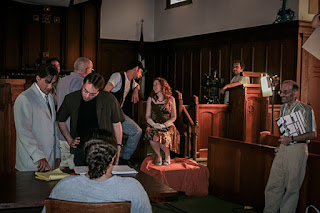 It's been 10 years since we shot our first feature film, Dear J. And looking back, there are quite a few memories that come up...

SEND OUT THE BAILIFF
One memory is dealing with a whole bunch of sound issues. Such the lawn care people and their weed-whacker! Right outside our windows. Now our dilemma was to find a way to get rid of them so we could finish our scene. Since we were in the middle of filming our courtroom scenes, we had the Bailiff (played by Michael Kricfalusi, who also doubled as our 1st AD) in costume and on set that day. He was the perfect guy to send... And that did the trick!

JURY DUTY
We were able to get Karen Lynn Gorney (who played opposite John Travolta in Saturday Night Fever) for the role of the Judge. However, she couldn't make the read-through of the script because she couldn't get out of jury duty!

NO PARKING
We scheduled our shoot to film on the grounds surrounding the tennis stadium just days before the U.S. Open would begin. We had all the paperwork, but had not requested parking passes since the park has lots of free parking. However, due to the heightened security of the U.S. Open, it turned out that the parking lot that we had chosen happened to be occupied as the temporary headquarters of the New York Police Department! With a little persuasion—and due to the fact that we did have the necessary paperwork from the City of New York to shoot at the park—the police finally granted our small skeleton crew permission to park among the police cruisers.

LOOK, FREE RAIN
The weather forecast predicted light rain for the morning we were to shoot some outdoor scenes. By the time we arrived, the weather had turned sour. We saw another film crew pack up their equipment and leave. But not us. It was raining cats and dogs, but we filmed anyway. Umbrellas and raincoats protected the camera. The actors were great sports about dallying in the rain. And fortunately we didn’t have to worry about sound! Later, we discovered that a tornado had touched down not too far from where we were filming. Come to think of it, that must have been why the sky was a sickly green color!

To view more pics, check out the newsletter we just sent out this week.