It's Not About the Gear 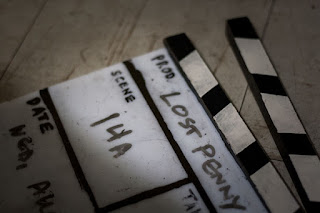 Ask any filmmaker... You'll find it's easy to get sidetracked about the gear. About the newest and best camera. About some new amazing slider or dolly system. There's so much gear out there. And it's easy to fall into the trap of gear-envy. If only we had that piece of gear, we would make better films.

Yes, gear is necessary. You can't make a movie without a camera. You (most likely) needs lights and sound equipment. So, while gear is important, you don't actually always need the latest and the greatest. You need a system to capture your vision. The gear is a tool. It's there for the purpose of storytelling. Spending hours looking at what's out there can be counterproductive... especially if it's taking you away from making your movie.

As filmmakers, we have to be very careful with how we spend money. And gear costs money. There are a few things that influence us about getting new gear...
Here's an example: Our clapper board is 10-years-old. When we first got it, it was new and shiny and looked great. Now, it looks like it's been around for... well... ten years. We could get a new clapper board. But we don't (at least, we haven't replaced it quite yet). Why? Because it isn't seen on camera (except by the editor). It still does its job of giving a nice clap for the audio sync. Of course, someday we will probably have to replace it, but for now, we use it in all its (not-so-new) glory.

It is true that gear wears out and needs to be replaced. We recently had a computer screen die on us. We will have to replace it, because we do need it.

Movie-making is primarily about telling a story. It's about what we see on the screen. And gear is a means to tell that story. Gear is useful. Gear is necessary. But, ultimately, it can't be what gear you use, because gear is really just a tool that nobody ever needs to see.

It's Not About the Gear