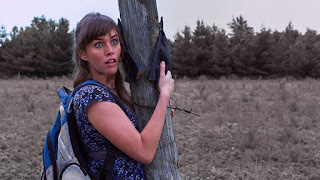 It doesn't have to be a literal bomb. Rather, it's something that propels the plot forward, making the audience want to find out what comes next.

Alfred Hitchcock was particularly good at this. Known as the Master of Suspense, he knew how to use ticking bombs. The key is not to let the bomb explode suddenly, out of nowhere. It should never take the audience by surprise... Instead, Hitchcock would say you need to let the audience in on a bit of information... that there is a bomb ticking, about to explode.

What is the hero going to do? Will they figure things out in time? How will they react?

Again, movies do not need a physical bomb for this to work. Take a look at one of Hitchcock's movies... one without an actual bomb: Vertigo (1958). (Warning: there are SPOILERS in this example for those of you who haven't seen this movie.)

The "ticking bomb" in this case is the revelation about the characters: Judy and Madeleine. They are one and the same person. Actually, this is where the movie differs from the book it's based upon. The movie reveals this information much earlier. Although that the James Stewart character is left in the dark until the very end. The audience knows, but he doesn't.

So, why did Hitchcock stray from his source material?

In an interview with Truffaut, he reveals his reasoning: "I put myself into the place of the little child, sitting on its mother's knee, being told a story. When Mother pauses in telling the child the story, the child always says, 'Mummy, what comes next?'"

Hitchcock goes on to explain that even though everyone thought he was ruining the surprise ending of the book, it was more to his purpose to let the audience in on the secret. Going back to the little child analogy: The kid, knowing this secret, would then ask his mother, "And Stewart doesn't know it, does he? What will he do when he finds out about it?"

Not all movies need to be suspense thrillers like the ones Hitchcock put out. The ticking bomb can be employed in many and various ways. It's just a way of creating what-comes-next-mummy? moments.

It's just part of good storytelling.