Usually, when it comes to book/movie adaptations, it's not a bad idea to live by this advice: "Never judge a Book by its Movie." (attr to J. W. Eagan)

It's not often that you find a classic book that adapts into an equally classic movie. To Kill a Mockingbird (1962) is one such book/movie combo. There are differences between the book and movie... after all, they only had 129 minutes into which to squeeze plot and themes alike. But the movie stands very well on its own two feet. And in fact, is a classic as much in its own way and the book.

Perhaps because the movie was well-cast, especially Gregory Peck in the role of Atticus. There's a story about one of the days that Harper Lee was on set... they were filming Gregory Peck returning home while his children run to greet him. Peck went up to the author after filming was done and noticed she had been crying. She explained that he had looked just like her father (the real-life Atticus), even down to his little round pot belly. "That's not a pot belly, Harper," Peck told her, "That's great acting." 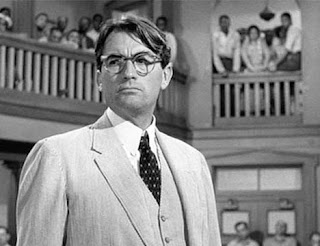 Here's a list of a few things you may not have known about the classic movie:

2. The pocket watch used in the film was a prop. However, Harper Lee later gave her father's actual watch to Gregory Peck because he reminded her so much of him.

3. The studios were not interested in adapting the Pulitzer Prize-winning book into a movie because it didn't have a lot of action or even a love story. It took Producer Alan Pakula to bring the book to the screen despite these "flaws".

4.  Film debut of Robert Duvall as Boo Radley. While Boo is crucial to the story, he is pretty much a silent role since he does not speak a word in the movie.

5. To prepare for the role of Boo, Robert Duvall dyed his hair blond and spent six weeks out of the sun.

7. This is Superman's favorite movie (Or, rather, Clark Kent's favorite.)

8. The final speech (a 9-minute summation) in the courthouse was delivered by Gregory Peck in only one take!