Which Film World Would You Visit? 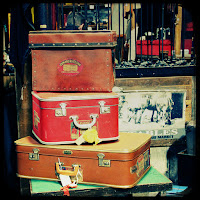 When a movie is created, so is a Film World.

Sometimes the Film World is very much like the world in which we ourselves live. People live in houses or apartments. People go to work. They shop. They go to school. They go to restaurants. It's Earth. Our time. Usually the precise location doesn't even matter. It could be your town or city. The protagonist could be your neighbor.

The genre of movie doesn't count. It could be anything. A rom-com like My Big, Fat Greek Wedding or Tootsie. Or it could the James Bond movies or The Hurt Locker. Or a sports movie like Rocky.

On the other hand, sometimes filmmakers present a world that comes straight out of history. It really existed, but doesn't quite exist in the same way now. The past could be the 1980s or 1990s. (Although you could argue that a movie made in the 80s about the 80s really belongs in the category above.) Or it could be set during World War II or the middle ages. In other words, the protagonist could be the neighbor of one of your ancestors. While it usually involves a specific event in history, it does not have to be based on 100% fact. Any period piece movie fits this: from Lincoln to Braveheart to Shakespeare in Love.

And then there are Film Worlds that don't really exist. Or future worlds that don't exist (yet). This can be split into two types of worlds, actually. The first one is pure fantasy or science fiction. The Star Wars universe comes to mind. Star Trek. The Hunger Games. Fairy tales also fall into this category. The key to this one is that we must become acquainted with a world where we may not know all the rules yet.

The second one is where the Film World merges real world with perhaps just a touch of fantasy or sci-fi.
We will recognize own world, but soon will realize that other elements affect the people who live in the movie. Think of the magical nanny, Mary Poppins. Or The Matrix. Batman, Spiderman, etc.

So, if you could pack your bags and visit one Film World, which would you choose?


This post first appeared on A Moon Brothers Film..., please read the originial post: here
People also like
Sprawdź swoje IP i pobierz darmowy VPN
How to Choose an Epoxy Floor Coating for Your Garage
Money Beliefs That’re Holding Your Business Back
GALA DALI – THE MUSE OF THE SURREALISTS
Hollywood Dentist Providing Red Carpet Smiles
Life at 57 - Where I'm At
Middle Aged And Elderly Knee Massager Electric Knee Pad
Understand You
Fiction Series So Big, They Cross Multimedia Platforms: The Witcher Series by Karen Wiesner
Tips for Getting Your Backyard Ready for a Late-Fall Party

Which Film World Would You Visit?