The Art of Boring 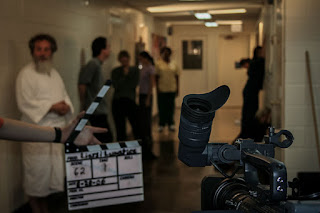 Filmmaking is an art. But it's a methodical art. When things go well on a film set, just exactly as planned, then it can seem slow and, well... boring. Yes, a film shoot can be boring. Take it from these folks:

"The actual process of filmmaking, the many hours out of your life -- it is very slow and boring." -- Rick Moranis

"Filmmaking is a lot like being a Fireman, there is lots of waiting before a brief moment of action." -- Cyndi Greening

"I find all filmmaking difficult, quite boring and not remotely funny." -- Rowan Atkinson

Ten years ago, we shot our first feature film. We had few scenes that needed a bunch of background actors. In one particular scene, we needed the extras to write letters. We handed out the props (paper and pencils). We told them to write whatever they wanted as it didn't really matter what they wrote.

After we wrapped for the day, and all the background actors had gone home, there were a few letters left behind. As we cleaned up (note: when you are independent filmmakers, the end of the days means you are the ones tidying up the set for the next day's shoot), it was interesting to see what people had written.

To paraphrase a few: "This is soooo boring. I couldn't be more bored than if we were staring at a blank wall."

So, why is filmmaking boring? Because it takes time. There's a lot of waiting involved to set up lighting so that shots match one another. Safety is important. Repeating the same dialogue over and over again. Trying to keep props and costumes the same for continuity.

That's the behind-the-scenes secret a lot of people don't realize. Yes, the art of filmmaking can be boring.

All the fun, horror, tension need to be on the screen.

The Art of Boring