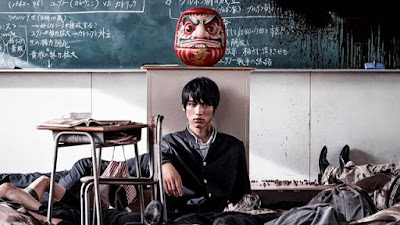 A group of teenagers have to survive a series of deadly trials in As the Gods Will. Shun Takahata (Sôta Fukushi) is a teenager fed up with his boring life. However, he quickly regrets his wish for more excitement when a deadly daruma doll appears in his classroom and begins a deadly game of Red Light, Green Light, with head exploding consequences. This is only the first of a series of trials put on Shun and fellow students, such as close friend Ichika Akimoto (Hirona Yamazaki) and borderline psychotic Takeru Amaya (Ryûnosuke Kamiki).

Takashi Miike adapts the Manga by Muneyuki Kaneshiro and Akeji Fujimura to create what is essentially a very surreal version of Battle Royale. A large alien cube appears above cities and kidnaps kids from high schools, forcing them to participate in trials involving a giant good-luck cat and creepy kokeshi dolls. During this time, the survivors gain a cult following and begin to become known as "God's Children."

With As the Gods Will, Takashi Miike combines some very cute visuals, and seemingly innocent games, with some extremely gory violence. The film definitely has some unique ways of killing the central teenagers, whether it be their heads exploding into red marbles or getting crushed by a giant snowboarding polar bear. Despite the high levels of gore, the plot of As the Gods Will doesn't come close to something like Battle Royale and the film ends with there still being many loose ends. While there is some fun to be had with watching this, As the Gods Will is lacking the substance to go with the style.