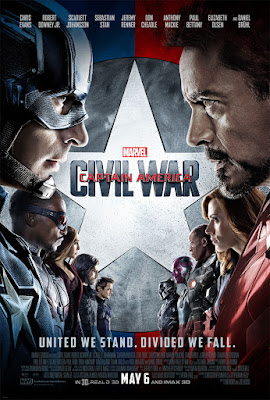 The Avengers find themselves divided in Captain America: Civil War. With the actions of The Avengers often ending in mass collateral damage, the United Nations decides to introduce an accord to keep these heroes' actions in check. While Tony Stark (Robert Downey, Jr) is all in favour of the accord, Steve Rogers (Chris Evans) doesn't trust the opinion of the government. The growing tensions reaches a boiling point when Steve's friend Bucky Barnes, aka The Winter Soldier (Sebastian Stan) is framed for a terrorist attack and Captain America and Iron Man find themselves on opposing sides.

Phase Three of the Marvel Cinematic Universe begins with Captain America: Civil War, which picks up right where Avengers: Age of Ultron left off. With the actions of the superhero team often resulting in the destruction of entire cities, it is decided by US Secretary of State Thaddeus "Thunderbolt" Ross (William Hurt) that the actions of The Avengers can no longer go unregulated. While many of the team agree to sign the new UN accord, Captain America doesn't believe this to be the answer. Meanwhile, a man named Helmut Zemo (Daniel Brühl) has put events into motion that may result in tearing The Avengers apart from the inside.

The mass interconnected Marvel Cinematic Universe has been going on for about eight years now and Phase Three is scheduled to continue developing this universe for at least another three. I have generally enjoyed these films, however I have to admit that it's getting a little tiring watching films that are more about developing the universe than being compelling stories. In some ways, the titular Civil War of this third Captain America film is a bit of a MacGuffin, with the true purpose of the film being to introduce new characters, who will be getting their own films in the near future.

The main new hero introduced in Captain America: Civil War is Wakandan prince T'Challa, aka Black Panther (Chadwick Boseman), who develops a personal vendetta against the Winter Soldier after a terrorist attack. However, the more exciting new addition to the Marvel Cinematic Universe is the latest incarnation of Spider-Man (Tom Holland), who finds himself brought into the conflict. While Spider-Man's appearance obviously comes off as an after-the-fact inclusion, it is definitely great that Marvel's signature character is finally part of the Marvel Cinematic Universe and it makes me excited for the next stand alone Spider-Man film.

Captain America: Civil War peaks with a large scale battle between The Avengers, which features some quite entertaining set pieces. It is almost shocking that this battle didn't end up being the climax of the film, with the plot continuing for quite some time after the battle has concluded. With the film focusing so much on the Civil War, it is almost unnecessary that the film also features an antagonist in the form of Helmut Zemo, who is manipulating the events from behind-the-scenes. It can almost be argued that Iron Man is the true villain of the film, with much of the plot being built around the growing animosity between him and Captain America.

While I would say that Captain America: Civil War is a solid enough film, I also have to assert that the strength of the Marvel Cinematic Universe is starting to show its cracks, as the films become increasingly formulaic and all about setting up future films.