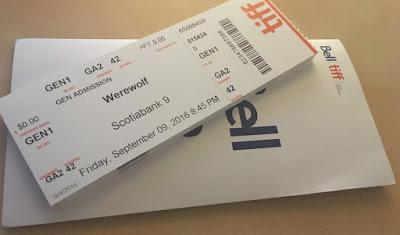 Yesterday was TIFF single ticket day. It is always a stressful day for festival goers, who opt to purchase their tickets separately, instead of getting mutli-film packages. Those coming to the box office in person have to deal with multi-hour waits in line, while those ordering on line have to contend with server issues and online queues. However, this year there was a whole other set of issues that sent social media into a frenzy. Most of this had to do with the fact that TIFF now uses Ticketmaster as their ticketing platform, which has turned out to have a number of downsides. Since I redeemed volunteer vouchers to get my tickets, as I've done for the last decade, I didn't personally experience the frustrations faced by those buying TIFF tickets. However, I still thought that I would breakdown this backlash, since it is definitely something worth talking about.

Probably the biggest criticism I've seen involves new "in demand" pricing for the festival, which raises the price of screenings based on demand. The barely visible fine print on the TIFF website says that "prices subject to a $2–7 increase based on demand." However, posts on social media show that increase tends to me much more:

Films that were "off sale" during package redemption are now available with higher Pricing. Crazy. $34 for non PREM. pic.twitter.com/iSTspr5M51
— Matt Rorabeck (@mattrorabeck) September 4, 2016

This was only one of the many complaints I read on social media about in-demand pricing. Someone even posted TIFF's statement on why this pricing scheme exists:

So, apparently this introduction of in-demand pricing is following the example of other organizations, such as Mirvish Theatre Company and Toronto Symphony Orchestral. However, some may (and have) criticized this pricing scheme as "gouging the consumer whenever possible" and that it's not necessarily something that TIFF should be doing.

Those angry at TIFF's single ticket prices, often use them to criticize TIFF's designation as a non-profit charity:

Of course, there are still people out there who view TIFF has the festival as nothing else. The bulk of TIFF's charitable work comes from using contributions from donors to fund film preservation efforts, such as last year's restoration of The Mask, as well as various film-related programs around Canada. Just because tickets to a single yearly event, which presumably costs a lot to put on, is above what many people consider reasonable, doesn't necessarily mean that TIFF as a whole shouldn't be considered a charity.

In fact, there are people who are sick of hearing the same complaints every year, especially since the complainers still usually ended up purchasing tickets anyway:

However, putting the whole "in-demand" pricing issue aside, single ticket day also revealed a very dark downside to TIFF teaming up with Ticketmaster. Namely, it has made it much easier for scalpers to resell tickets at heavily marked up prices:

Seeing that StubHub screen capture quite shocked me. In fact, I brought the question to TIFF themselves, whether anything can be done about this. Sadly, the answer wasn't a good one:

Well, there you have it. I should probably note that I am not really criticizing TIFF themselves, however I do think they probably shot themselves in the foot somewhat partnering up with Ticketmaster this year. While the team-up does allow TIFF to use scannable e-tickets for the first time ever, it comes with problems such as these added fees and easier access for scalpers. Hopefully, TIFF will learn from this experience this year and make some serious improvements to their ticketing system for next year, even if it means choosing to end their association with Ticketmaster.