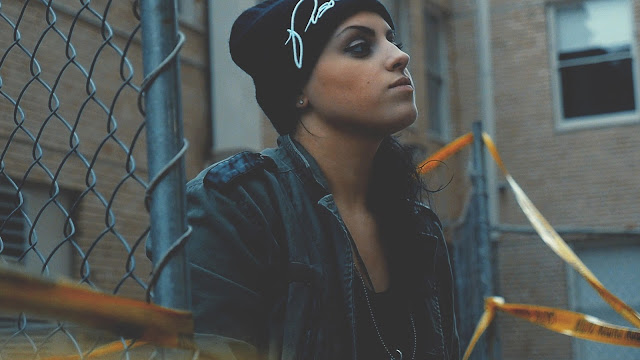 Earlier this year we did a interview with Kaydence and we have to say congratulations because she just signed with BMG Music. It also looks like she is working with Ariana Grande. Checkout our interview we did with her earlier this year.


Hey Kaydence, for those new to the name let the world know who you are and what you do.

My name is Kaydence- I am an artist/songwriter from Queens New York. I write music to inspire the dreamers and empathize with the world. I don't want to be confined to one demographic, My goal is to relate with all types of listeners. I've always been told music has the ability to alter moods, change perspectives...So I want to be able to do that with my music and writing.

When did you know music was your calling? Who were some of your influences early on?

I knew music was my calling back when I was in high school. I grew up in a musical household. My sister April Kry was the star singer. She had the voice, the look... And I tried to avoid music so that I wouldn't be a shadow of her. Sometimes when your purpose is so strong, you just can't avoid it any longer. I actually started producing- I got recognized by Ludacris on a website he had started for producers and artists called "Wemix". He sent me a voice note saying that he was impressed. That's when a good friend of mine encouraged me to pick up the pen, and I haven't put it down since.

My musical influences have been Christian music. Jon Gibson was a big influence growing up-- Anointed was an r&b group I listened to a lot... All the way to Tupac and of course the Pen Sensei James Fauntleroy. Pretty diverse selection, I know lol.

How would you describe your own style or sound?

I get this question a lot. As an artist, people say that I sound similar to James Fauntleroy and Cocaine 80's. They have all been an influence on my sound, but my focus is to be innovative and relatable. If that makes my sound indescribable, then so be it- it's better that way. People get so bent on sounding like someone else. That's why the culture is oversaturated with the same sound. My focus is the message and the feelings behind the music.

When it comes to being an artist and a songwriter, how do you creatively approach each when its time to work? Do you prefer one over the other?

Over the years I have taught myself that I should approach everything as if it's not my own. Being a songwriter means you can't get attached to your work, although I do write each record as if the story was my own. When you're able to tap into that passion yet stay unattached- that's how you master both.

You have been very busy lately penning songs and hooks for some of the more sought after producers in the game right now including Focus..., Cardiak, Swiff D, 1500 or Nothin. What have you learned from these recent experiences?

I've learned that above all--humbleness , positivity and confidence really goes a long way. When you build a relationship with these talented successful producers, having those vibes make them believe in your talent THAT much more. It makes them want to see you succeed as well, so they'll go the extra mile and vouch for you. It's so much more than being dope at what you do, it's the energy you bring as well.

How important is the songwriter x producer relationship when it comes to the end result?

I feel like producers don't get enough credit for what they do. They create the feeling, I just add to it. There is no song without the music, then it's just words. When they feel appreciated, you hear the difference. Always make them feel appreciated, and they'll do the same for you. And that's how timeless music is created.

You have also worked with some very talented up and coming producers such as Analogic, Symphony, RatchetGxds to name a few, what was it about their music that made you want to be a part of it vocally?

I love all those guys. They all have their own distinct sound and they are bound to be outta here within the next few years, mark my words. Their work ethic is like no other, and that's how I know...a lot of beats I come across sound the same. But with them I can honestly say I have never been disappointed, nor felt like one of them couldn't be a hit record.

Who have you not worked with yet producer wise that is on your wishlist?

Da Internz of course. I'm a big fan of Kosine and have been dying to work with him. Just blaze, DJ Premier, Boi 1da, Hit-boy... I could go on. I know I'll get to all of them eventually lol.

Let’s talk about your recent project 'Spoiled interior', what was the mindset going into the putting this together and how was the feedback from the listeners and new fans?

When I created spoiled interior, I was in a dark place. I had come out of a bad management situation and lost all of my relationships that I built for the past five years. It was devastating. So I learned to start from scratch and rely on myself to push myself forward, even through that hard time. It was my first body of work that I've put out. Since then I've grown more confidence, and the response from the listeners has been amazing. So amazing that it's been requested that I work on a second project.

Which is almost finished! It will be called "The Pen Piper". An EP executively produced by the Ratchet Gxds. Look out for that!

Where does Kaydence go from here?

I'm focusing on both my artist and songwriting as always. I was working in a career that burnt me out and took a lot of my time- so just recently I decided to put in my two weeks. I'm taking a leap of faith and moving to LA. I don't have a plan B, being successful in doing what I love is my only option.

Where can we find you online?

My social media is where you can find me-

I want to thank the istandard family for being part of my journey, you all are appreciated. Thank you to my fans, friends and family for their continuous support. I look forward to holding a Grammy in my hand and thank each and every one of you.

And lastly, a special shout out to my home team, Anothr Breed. Abso, thank you for being there for me during my lowest points and believing in this just as much as I do. Leona, thank you for riding for me since before there was ever "Kaydence". Johnny, thank you for representing us to the fullest and I know God all has a plan for us. Let's all help make a positive impact not only in this industry, but on the world itself.

Update: Kaydence signed with BMG and is working on Ariana Grande new music