No synopsis or re-cap tonight - instead let's play spot the connections!!

(Note: I'll start and you see if you can add any others - Leave a comment or e-mail me if you found one I haven’t listed.

1. Hiro eats Usutu’s (the African Tribesman) concoction of hallucinogenic herbs and donkey poo and takes a spirit walk into the past as he follows the underworld in which Arthur Petrelli travels. Hiro is now connected to Matt Parkman who ate the same poo-goo. The difference? Matt walked into the future while Hiro stalked the past.

2. Arthur Petrelli and Linderman are in league and plot Nathan’s death. Nathan’s work as an assistant D.A. threatens to uncover their deceit and their, what else, connection. Also, we find that Linderman is aware of Arthur’s ability.

3. Thompson (Season 2 Primatech Company operative played by Eric Roberts) is trailing those with abilities and in Memphis, Tennessee he finds Meredith and Flint. We find out that Meredith and Flint are brother and sister, making flint Claire’s uncle. Another connection!

4. After Sylar’s first kill (Brian Davis who can move objects with his mind) guilt sets in and he attempts suicide. Fortunately, for fans of Zachary Quinto, Elle enters the watch shop and finds Sylar swinging from his noose. Using her ability she cuts him down before he can kill himself. Elle and Sylar are now, once again, connected! (Yes, you’ll get sick of hearing it after this post!)

5. Elle and Bennett (HRG) are working together for the Company and following Sylar’s every move. Bennett, who calls Sylar Mr. Gray (because this is in the past) is driving a Primatech Paper van. Elle, Sylar AND Bennett are connected.

6. Thompson captures Meredith in a convenient store hold up in Memphis and enlists her into the Company as an agent. Thompson and Meredith and by extension Claire are now… connected!

7. The attempt on Nathan’s life (with his wife Heidi in the car) on the highway is engineered by Linderman. Now we find out who was behind the attempted murder from Season 1.

8. Nathan tells his father that Linderman’s men caused the accident that paralyzed his wife and that he will do anything to put him behind bars, thus establishing the hatred and link between Linderman and Nathan. But why does Linderman haunt future Nathan?

10. Sylar has a duplicate map (or a reasonable facsimile) to that of Chandra Suresh’s in his apartment. This is a convoluted connection in some ways and not of people but circumstance and the links on the maps are the numerous connections to many of the people in the world with abilities. BTW, these connections were established in the very first few episodes of Season 1 and solidified in this episode.

11. Sylar’s list of others with abilities shows five names; three of which become his future victims (Davis, Trevor and Charlene), Molly, who he attempts to capture but is saved by Matt Parkman and Sparrow Redhouse (whose past role eludes me at the moment.) Sylar is connected to four of the five people on the list. (More about the list can be found in the trivia section below.)

12, Flint is captured by Thompson and held in Cell 8 at Primatech. This is the second time that Flint has been caught and incarcerated at Primatech. Flint is then connected to a place – Level 5.

13. Angela finds out that her husband and Linderman are planning Nathan’s death. Arthur wipes her mind. Linderman mentions a guy in Montreal who worked for him in Vegas. Angela is now aware of the fact that the two are in league and are up to no good. Linderman is connected back to Vegas (and his Niki using days.)

14. Meredith releases her brother, Flint from his cell and tells him that “Daddy used to say, God gave you a big sister instead of a brain.” We might consider the parentage here for a moment: Just who IS Meredith and Flint’s Daddy? If Peter and Nathan, the children of those with abilities, both have powers then it follows suit that Meredith’s parents also have abilities and are somehow… connected!

15. Thompson catches Meredith and Flint on a train in Texas as they head for freedom in Mexico. This establishes a re-connection between the three of them. The ensuing battle that takes place causes a fire to erupt. What else when Flint and Meredith are involved?

16. Linderman tells Angela that Arthur is messing with her thoughts and that he has wiped her mind numerous times. A hint of subterfuge crosses her mind as she makes a lentil soup. Also, Linderman mentions his pot pies, which brings us back to the kitchen sequence in Vegas during Season 2 where he is cooking.

17. The fire on the train causes an explosion which derails the train. As Meredith and Thompson walk away from the scene they discuss Meredith’s long dead daughter. Thompson informs her that she is not dead. Enter Claire in her cheerleader uniform as she scampers into the train wreck to test her ability and unintentionally saves a man. We can now connect an event, the train wreck caused by Claire’s mother, to Claire, Meredith, Flint and Thompson.

18. We find that Elle has invited Trevor Zatslan (a name from Sylar’s list) to dinner and we find out the identity of Sylar’s second victim. Sylar and a name on his list are immediately connected. Of course, the connection is broken when Sylar saws his skull open.

19. Angella poisons Arthur’s soup which causes him a heart attack. Angela has invited the Haitian to ward off Arthur’s powers and making it impossible for him to change her mind. Note: We find that the Haitian is working for Angela Petrelli and by logic then we must conclude that Bennett is also working for her.

20. The mysterious bloody handprints on the door to Sylar’s inner sanctum (found by Mohinder in Season 1) are from Sylar’s be-skulling of Trevor. A visual from Season 1 is connected with this episode.

21. Angela and the Haitian plan the removal of Arthur Pettrelli’s body but Nathan finds his father on the floor and calls 9-1-1. This does two things: 1. It prevents Angella from completing her task and removing Arthur and 2. Sends Arthur to the hospital and within range of people he can manipulate with his mind.

22. Bennett leaves Texas on another mission. He catches a taxi which has just been vacated by Peter Petrelli and which is driven by Mohinder Suresh. The three are now connected in the past before they have ever actually met!

23. The doctor at the hospital tells Nathan and Angela that Arthur has passed away. (I got the feeling that she didn’t believe a word of it!) The poison has rendered Arthur incapable of movement but he controls the doctor’s mind and he agrees to provide another body to use for his cremation. This initiates the genesis of the Pinehurst Corporation!

24. Arthur Petrelli kills Usutu (presumable by thinking his head off?? I’m still shaking my head in wonder at this one folks…) and grabs Hiro by the head… (To be continued)

1. Early in the program Linderman refers to Arthur and Angela as “my King and King” inferring some type of royalty. I wonder what he knows?

2. Two new abilities were revealed tonight: 1. Danny Pine who has the ability to create a metal hand (didn’t Tycho Brahe do something similar in the mid-1500’s?) and 2. Trevor Zetslan who can shoot invisible energy bullets from his fingertips.

3. Usutu’s Paintings (as I saw them):
a. Arthur Petrelli
b. The symbol
c. A man in a red haz-met suit?
d. A woman in a blue dress (Tracy maybe?)
e. Dead man in a large pool of blood
f. Flint with hands ablaze
g. Sylar cutting a skull open
h. Benjamin Knox punching someone or something
i. Matt Parkman holding Daphne in his arms 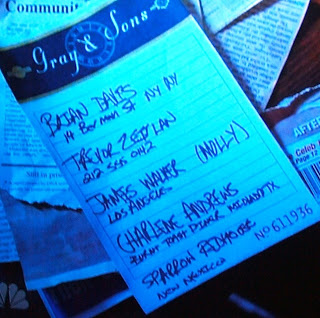 Note: The list is written on “Gray and Sons” stationary and has “No. 611936” printed in the lower right hand corner of the sheet. All the names on the list are connected to Sylar, who is in my estimation, PATIENT ZERO!!!

Due to a death in the family the last two episode of Heroes will not be reviewed on this blog. I apologize for it but some things cannot be helped. The Alternative.