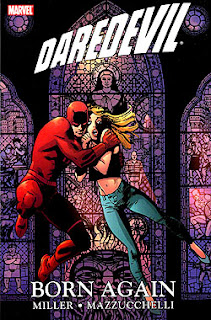 Another classic Frank Miller story that does this character justice. Frank Miller is slowly becoming one of my top 3 comic book writers and this story is another great example of why. I'm currently trying to read his entire Daredevil run while also reading some other stuff. Daredevil has always been a character I've been interested in but after reading Frank Miller's 'Daredevil: The Man Without Fear' and this 'Born Again' story he's becoming someone I want to read a lot more often.

I truly did enjoy this story. It took me a second to read only because I'm reading so many titles at once right now, but every page was just filled with greatness. So this story is about Karen Page (Matt Murdock's ex) hitting rock bottom and selling out Matt Murdock as the Daredevil for a drug fix. This information makes its way to the Kingpin who goes out of his way to try and destroy Matt Murdock so that the Daredevil will finally leave him alone. Kingpin bribes and threatens everyone he needs to in order to bring up fake charges of Matt committing jury tampering to get him disbarred. He even goes so far as to blow up Matt's apartment complex (which was fucking crazy in my opinion). Once Matt became homeless and depressed he finally breaks and walks into the Kingpin's place of work and tries to fight Kingpin....Matt got his ass beat. Like it just wasn't even a fair fight. Kingpin discards of the body in a way to make it look like it was a drunken accident, but Matt escapes and recovers stronger and with more resolve. The fact that Matt is still alive drives the Kingpin crazy and leads him to makes plans that show some weakness and will become his downfall. All the while Karen is doing whatever it takes to find him and apologize because she knows that Matt is the only one that can help her feel better. Later on the Kingpin hires Nuke (government experiment turned murder machine/badass/easily manipulated little prick) to try and kill Ben Urich who is planning on writing a news paper article exposing Kingpin. In my opinion this is where Kingpin fucked up. Now Nuke is on the lose blowing up shit and killing everyone he sees just to try and get Ben but he ultimately get defeated by Matt who finally suits up as Daredevil again and the Avengers come to take Nuke away after Daredevil wins. After all this Ben is given the information he needs to write the article and Kingpin is able to stay out of jail by just keeping everything tied up in court for years. At the end you also see a happy Matt Murdock walking with what looked like a healthy Karen Page, hand and hand looking to a brighter future.

This is a great story about personal redemption and trying to save and better yourself. Karen Page is a drug addict and what I want to say is minor porn star? She sells out Matt just to get high and she instantly regrets it. She does everything she can just to make her way back to him because she knows he will help her out and that they can do anything together. She gets chased by mercenaries, sleeps with guys just to get a ride on a boat back to New York, and even stays with an abusive murder just so she can find the one man she believes in, the one man she truly loves. That's just so crazy to me, takes a lot of strength to put yourself through all of that in hopes that someone you royal screwed over will forgive you. I think her character was written really well in this story, and by the end you truly hope for her redemption. The same for Matt, everything is taken from him, his job, his house, his girl, his sanity, and once Kingpin takes all these things form him, he becomes a hollow shell of himself. He fights and grinds until he's able to suit up again for a purpose. This starts as journey of revenge but by the end Matt remembers why he started all this to begin with, to help Hell's Kitchen and the people in it. At every turn something goes wrong for him, but each time I found myself hoping he finds his way out. I think this story did a good job on getting into the psyche of Matt and seeing how he can come out of Hell to only become stronger.

The Kingpin was another star in this story that goes through some emotional ups and downs. He's excited at the prospect of truly finding out who Daredevil is, and once he does he puts plans in motion and decides it's time to get back to New York and take over again. He methodically plans and sets up the craziest take down I've seen in a while. Once he's sure Matt Murdock and Daredevil are one in the same he destroys every aspect of Matt's life in hopes that he will know that it was the Kingpin who caused all this pain. His ultimate hope is to drive Matt so deep to the dark side that he can manipulate Matt to work for him, but Matt instead decides to try and fight Kingpin and loses. Kingpin has to deal with trying to tie up all the lose ends and find and destroy Matt again. As he struggles to tie up all the lose ends, he starts to lose his cool a little bit. Spending endless money and resources to try to take out Urich and to draw out Matt so he can attempt  to defeat him again. This ends up not working in his favor and he ultimately ends up losing and losing big, because now he has a confident and happy Daredevil to contest with. I mean just the face that Kingpin was willing to spend all this money and resources, and kill this many people just to get rid of a reporter and the potential to get rid of Daredevil says a lot about him being scared of the influence they both have on the world around him. The plans he sets in motion are just all crazy over the top and all really thought out, they really go to show how the Kingpin could be considered one of the best villains in the Marvel Universe, I think this story helped his character out a lot.

This story has everything people love in a 80's superhero comic, and I think Frank Miller flexes his muscles again in another story of rich character development. He just has a way of putting stories together that make you want to believe in characters and see them become better than what they were. Daredevil goes through Hell and back, so does the supporting cast, I would highly recommend this story to anyone interested in a good Daredevil story.

Verdict: 8/10, "As good as switching to Geico before Kingpin blows up your house"