Tom Hiddleston joined Instagram last week and got a warm welcome from his Marvel Universe Co star Robert Downey Jr who made a joke about Tom and his new girlfriend Taylor Swift in a post. He shared a photo of Tom wearing a white tank top with "I [Heart] T.S." written on it. The picture was taken during Taylor's Fourth of July weekend bash - “Join me in welcoming the biggest T. Stark fan of them all to Instagram! @twhiddleston,” he captioned it.

Join me in welcoming the biggest T. Stark fan of them all to Instagram! @twhiddleston
A photo posted by Robert Downey Jr. (@robertdowneyjr) on Aug 9, 2016 at 3:09pm PDT

Taylor got the follow on Friday (August 12) and was among Tom‘s friends including Chris Hemsworth, Mark Ruffalo and Robert Downey Jr., who welcomed him to Instagram in a hilarious way. 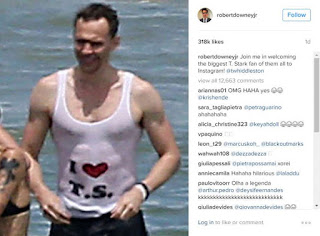 Taylor also followed Tom back and we can’t wait to see their first photo together, which we know is going to be super cute!

Tom and Tony appeared together in The Avengers movie and they’re both at work on upcoming films in the universe – Tom‘s Thor: Ragnorak as Loki and Robert‘s Spider-Man: Homecoming as Tony Stark/Iron Man.