What if Gol D. Roger failed to conquer the great seas or he was not captured and executed by the marines to start the new age of pirates, except for Brook? What would happen to our favorite pirate crew? Let’s see what the Strawhat Pirates would become if they are not pirates.

A Brief Questioning-Meditating on the…
7 reasons I’m tired of being tired
You Say Covid-19, I Say Hangar 18!
Can CBD Be Used to Fight Coronavirus …
Exhibit D: Lipstick and rifles--Ukra…
Brook – Detective

Most good detectives in the fictional world have experienced a psychological trauma caused by a tragic event in their past (he saw his crew/nakama died). Brook is wise (Wisdom comes from experience). And above all Brook is CURIOUS!! (Curious to see every girl’s panties).
Franky – Pilot

From the sea to the sky it suits Franky very well. Franky loves automotive, beams, missiles, and anything that shoots and explodes (maybe he will become a fighter jet pilot). He’s an electromechanical lord! He will create cola powered aircrafts with coup de burst!
Robin – Cabin Attendant 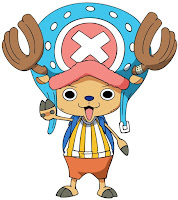 Chopper loves Children as shown in Punk Hazard arc. He’s willing and accepts change (he’s the only Zoan type that has more than three (3) transformations). Dr. Tony-Tony Chopper is very passionate just like most teachers as seen on how he treats his patients.
Sanji – Beauty Salon Worker

Where do ladies go? Definitely Sanji would work in a Beauty Salon. Sanji is very artistic, creative, attentive to details, and has good grooming habits. Lastly, Sanji gives the best to all ladies and handle women with care!
Usopp – Graphic Designer

Usopp is a jack-of-all-trades craftsman. He is very resourceful and analytic (Shown in all of his fights). He’s a marksman. This enables him to see more details (Shown when he stopped sugar the second time with the help of his haki).
Nami – Childcare Worker

Maybe because of Bellemere who adopted her together with Nojiko. Her concern for children is shown in Punk Hazard where they saved the children from Ceasar’s plans. She also took care of Momonosuke during their voyage to Zou (which makes all the funny scenes! haha)
Zoro – Policeman

Zoro became a bounty hunter (for the sake of earning money). He has a strong sense of justice just like Sengoku. He loves to fight, fight, and fight strong opponents but this time it’s against villains.
Luffy – Firefighter

Luffy is an action star that loves to save everyone. Firefighting really suits Luffy because it is very dangerous and its color red. What makes him a good firefighter? He’s fearless and clever. He does many things in his own unconventional ways.
This post is based on a SBS question answered by Oda: 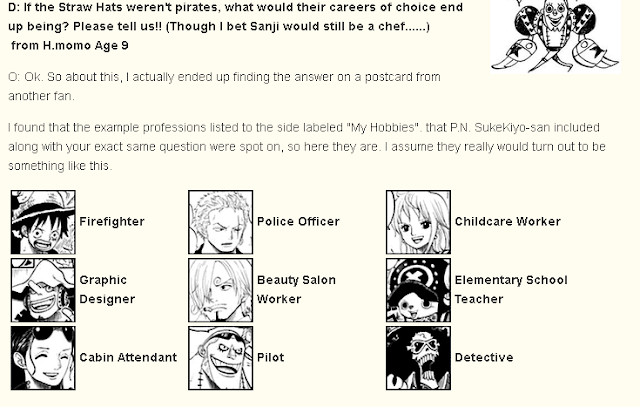 www.go-onepiece.blogspot.com does not own the images presented in this article. Credits goes to the respective owners: Eiichiro Oda and Toei Animation Co., Ltd. and others.