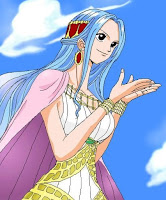 We all know that Jinbe will be joining the Strawhats soon. So, after Jinbe who will be the next nakama? Will Vivi join again the StrawHats? But why?
Vivi has been part of the StrawHat crew during the Alabasta Saga. She wanted to go out of the sea but she chose her country over sailing with her friends.


So what are the reasons that will make Vivi part of the crew again:

-          She has valuable information about the ancient weapon Pluton
How come Vivi get hold of such information? Well she found out the other poneglyph that was buried in the deserts of Alabasta (She doesn’t know it is Pluton. She can’t read it).  Does the information really about the ancient weapon Pluton? YES! Robin is quite sure that the poneglyph that holds the information about Pluton is in the kingdom of Alabasta but the one in the royal tomb only told about the history of the Nefertari.
-          She will know the dark side of the government
There will be a reverie that will occur soon and the Nefertari family will join the meeting of the world leaders. King Cobra (father of Vivi) is hunted by what Nico Robin told him that’s why he will ask about what have Nefertaris have done during the void century no matter what happen. Vivi will know it and he will decide to join the Strawhats. Maybe she wanted to do something that requires the help of StrawHats and or other reasons that after learning what happened in the past requires her to go on a journey.
Does the StrawHats will have more members?
Luffy stated in the series that he wanted ATLEAST 10 NAKAMA therefore he is not included in the count so we can still expect 2 -3 new members of the crew!