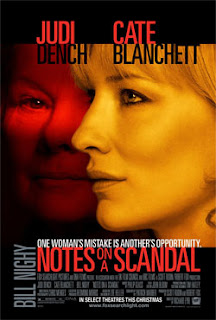 Last night Lulu and I went to see the new Cate Blanchett and Judi Dench movie Notes On A Scandal. What a great film and so good to see Dame Judi out of that “Lavender Girls” “Mrs Henderson” Dotty old lady rut she’s been stuck in for ages. This time Judi gets to play bad, in fact psycho lesbian from hell bad! And she’s great!

Cate Blanchett, not normally one of my favourite actresses, turns in a brilliantly underplayed and restrained performance and even that old ham Bill Nighy for once plays someone other than himself. 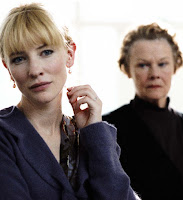 Judi’s usual fans however may find her portrayal of her a hard bitten, psychotic, spinster, school teacher a little hard to stomach but I loved it. Highly recommended this film goes on general release February 2nd Go see it!

10 Things to Do in Naples, Italy – Pl…
What to Expect from TV this Week: Net…
Boko Haram: Defeated Shekau playing d…
Jennifer Ladouceur: A Role Model Insp…
ONE ON ONE - Offensive Speech and Gur…

This post first appeared on Rank And Bile, please read the originial post: here
People also like
10 Things to Do in Naples, Italy – Places, Activities, Important Advice
What to Expect from TV this Week: Netflix and Amazon Prime Video
Boko Haram: Defeated Shekau playing double games with his sponsors – CATE
Jennifer Ladouceur: A Role Model Inspiring Passion & Innovation in Others
ONE ON ONE - Offensive Speech and Gurbir Grewal
Three Becomes Four - The Cate Family's Maui Portrait
Don't give up on desire - Veteran actress, Dame Judi Dench tells older couple as she hints she still enjoys an active sex life at 82
McDonald’s se foloseste de iPhone 8 pentru Promovare
Stop worrying about where your life is heading and take things at your own pace