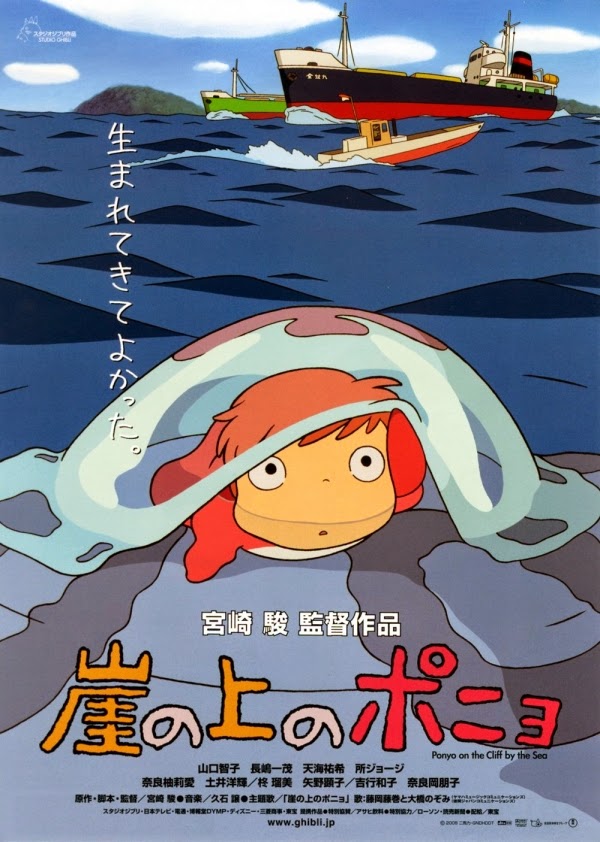 Welcome To A World Where Anything Is Possible.
Ponyo (2008) Poster
Japanese title: 崖の上のポニョ
(Gake no Ue no Ponyo)
Other title: Ponyo on the Cliff by the Sea,
Ponyo – Das große Abenteuer am Meer, Ponyo sur la falaise,

"This poetic, visually breathtaking work by the greatest of all animators has such deep charm that adults and children will both be touched." - Roger Ebert, RogerEbert.com.

"It is so beautiful and immersive that it's hard to imagine grown ups not losing themselves in it." - James Berardinelli, ReelViews.

"It is difficult to not love Studio Ghibli productions." - Rosalyn Lim.

Ponyo (2008) at a glance
Ponyo (2008), originally known as Ponyo on the Cliff by the Sea, is an adventure fantasy film directed by Hayao Miyazaki. This imaginative film was inspired by the classic fairy tale The Little Mermaid by Hans Christian Andersen and it is the third highest-grossing anime film in the world, behind Spirited Away (2002) and Howl's Moving Castle (2005); which are also by the award-winning director himself.

Ponyo (2008) Synopsis
A young boy named Sōsuke rescues a goldfish named Ponyo and they embark on a fantastic journey of friendship and discovery before Ponyo's father, a powerful sorcerer, forces her to return to her home in the sea. In her quest to become human and reunite with Sōsuke, Ponyo stumbles upon and releases her father’s magical Water of Life and triggers a gigantic storm. Now balance must be restored to the world they all cherish. Ponyo will delight your family with its magnificent animation and timeless story. 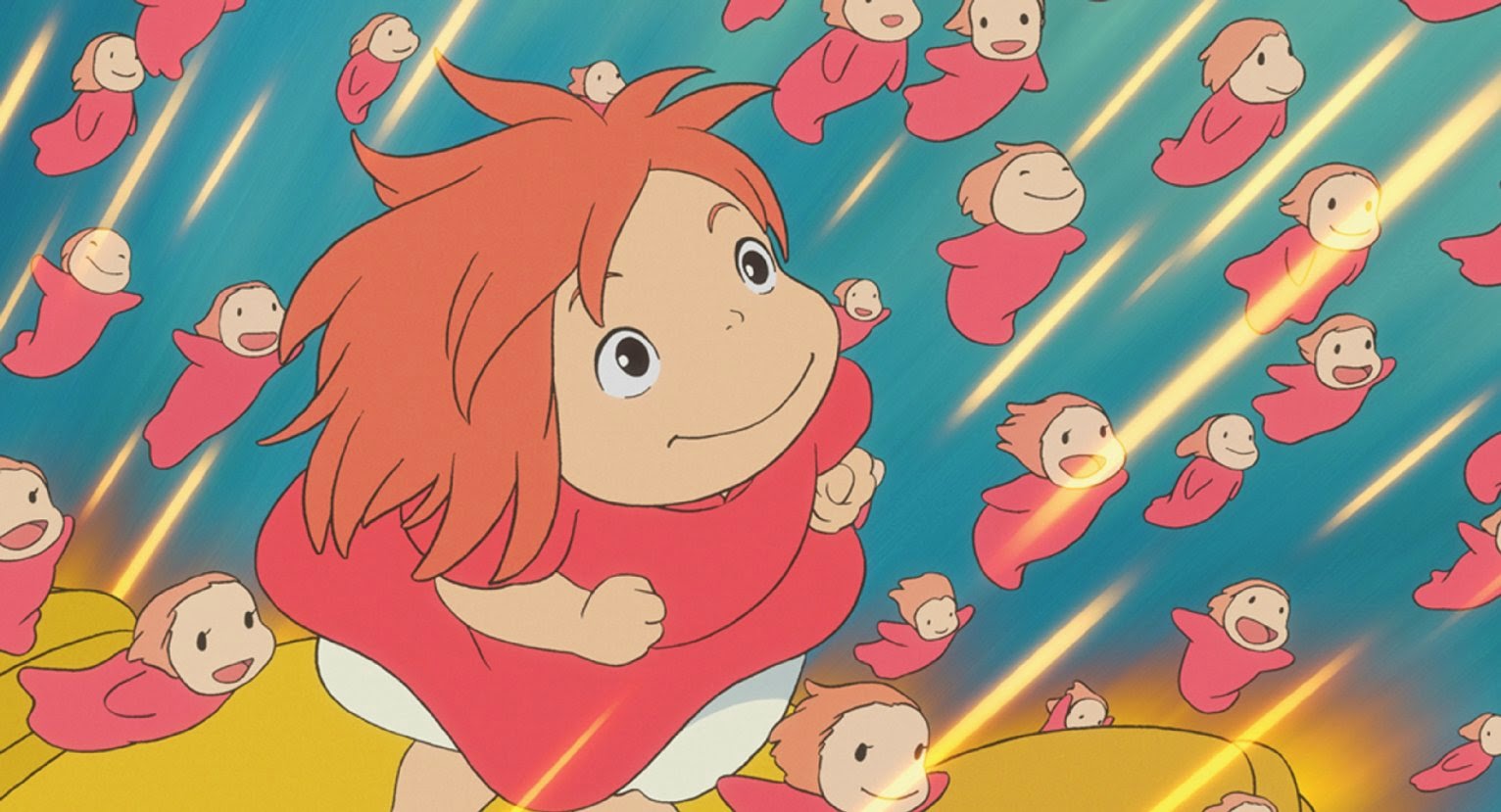 Ponyo and her little sisters!
Another great piece from Hayao Miyazaki, it is difficult to not love Studio Ghibli productions because Ponyo (2008) is immensely lovely and fantastically magical. This is certainly what happens when imagination meets creativity and animation. 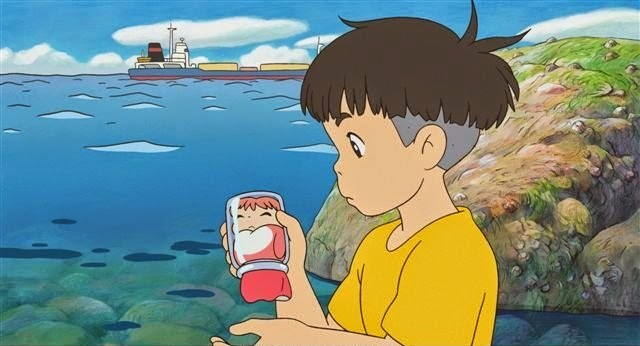 Sōsuke found Ponyo on the cliff by the sea near his home.
An unusual tale of romance and serendipity, two children from different worlds met and their lives changed forever. It might be unconventional but all of the scenes will only leave us think that the precious entity called life is equally strange and beautiful. 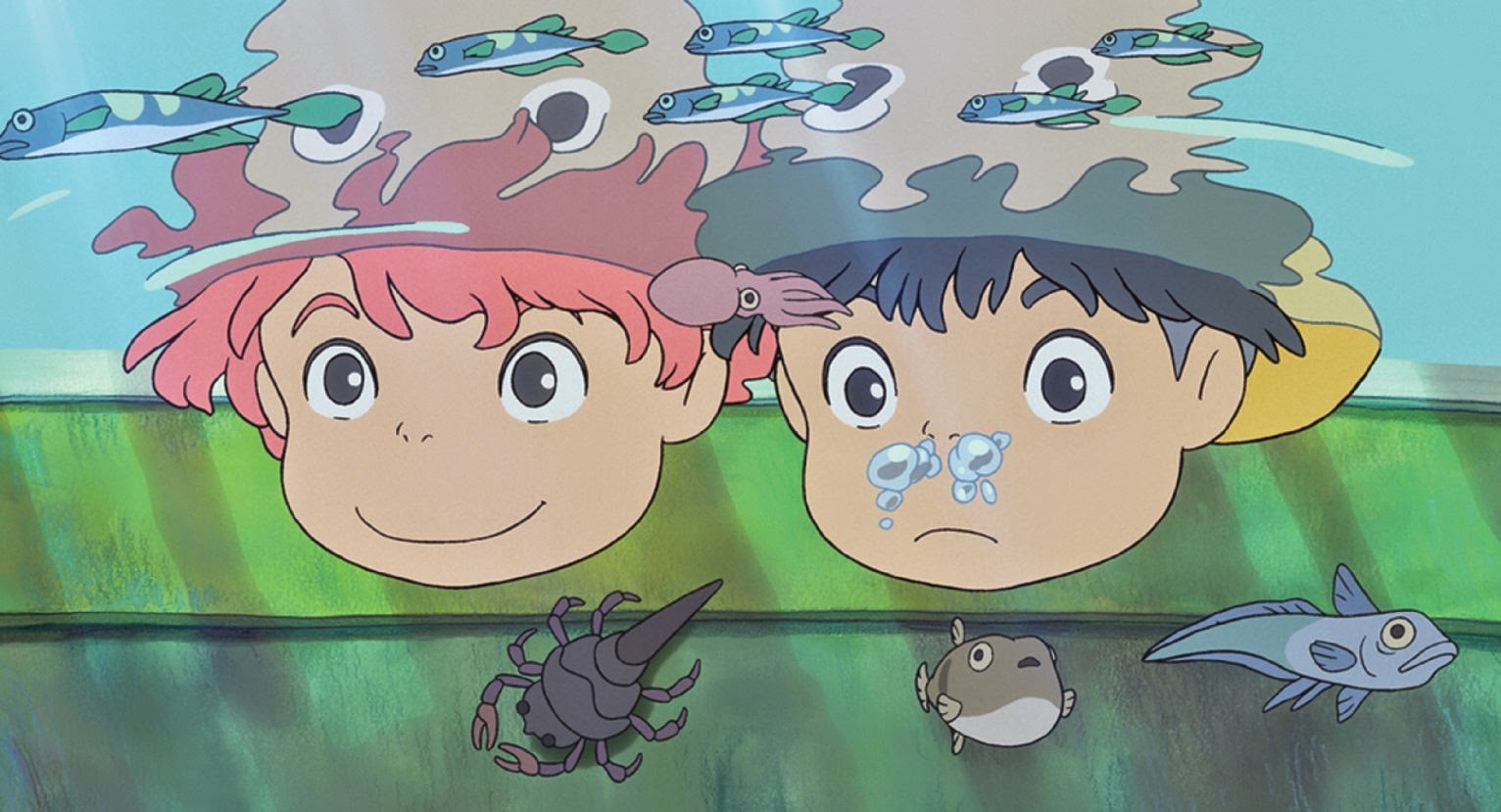 Ponyo and Sōsuke!
As tradition, the stunning visuals combined with amazing film score and voice casts make the anime story conceivable. With plenty of endearing characters, fictional sea creatures and unexpected scenes including exotic ancient fishes coming to life at various points, one can never help themselves to take delight in watching Ponyo (2008). 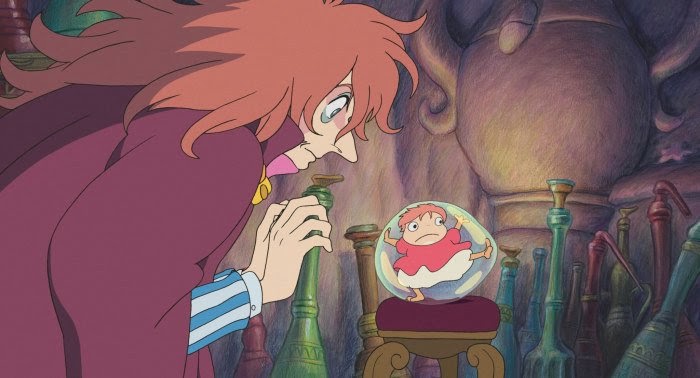 Fujimoto, Ponyo's father.
However, Ponyo (2008) is also filled with horrific elements even though most of the time it is light-hearted. The many important social and environmental messages might have concealed those but what's sad is that ultimately, the happy ending makes it easy to overlook the damage and disaster caused especially when the absorbing visuals and story has already effectively distract most audiences from thinking about them from the start. 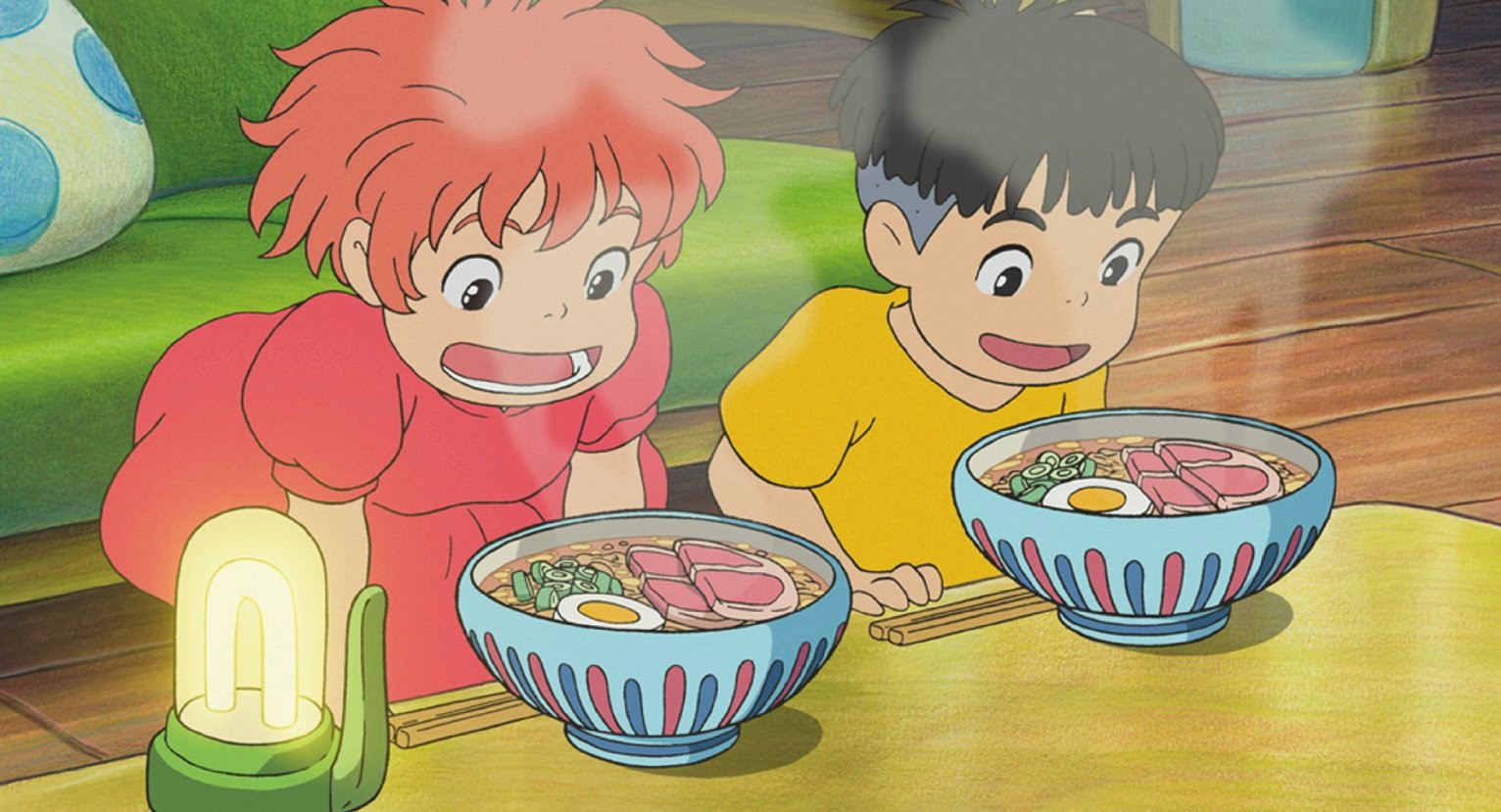 Instant ramen with eggs and ham!
If you love the elements of child-likeness and innocence, these two destined future lovers are surely pleasant. Although Sōsuke is just five, he is very independent just like many Japanese children out there. Then, Ponyo the goldfish with human face might not be familiar with the land but she learns and adapts well. Her transformation is just so magical and she is super adorable and kind-hearted! 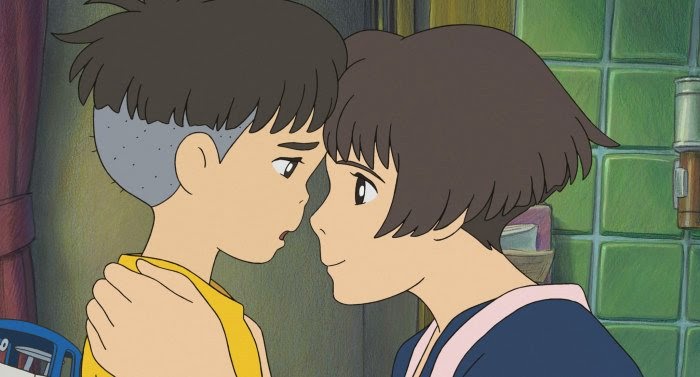 Sōsuke's mother, Lisa.
As a whole, Ponyo (2008) is charming on its own unique way. Although it has a simplistic ending which I usually do not like, I am sure you will find yourself liking this anime film. Why? Honestly, I am not easily pleased even though I might seem to be lenient in writing movie reviews sometimes but this anime film is terrifyingly good! It is one of my favorite now!

If only the ending is not that simple, Ponyo (2008) could easily become my #1 favorite Studio Ghibli film and unthrone Grave of the Fireflies (1988) and Spirited Away (2001) from my top two.. Highly recommended for Studio Ghibli fans!
Cool fact: Noah Cyrus (Miley Cyrus's younger sister) and Frankie Jonas (Jonas Brothers' younger brother) are the voice of Ponyo and Sōsuke in the Disney's English version!

Movie Ratings
Will write a page regarding this and add this to all animated feature entries in the future.
Who will like this?
You will love this if you love adventure fantasy! It is also great as family film because it is so sweet and lovely!
Gallery (More Photos) 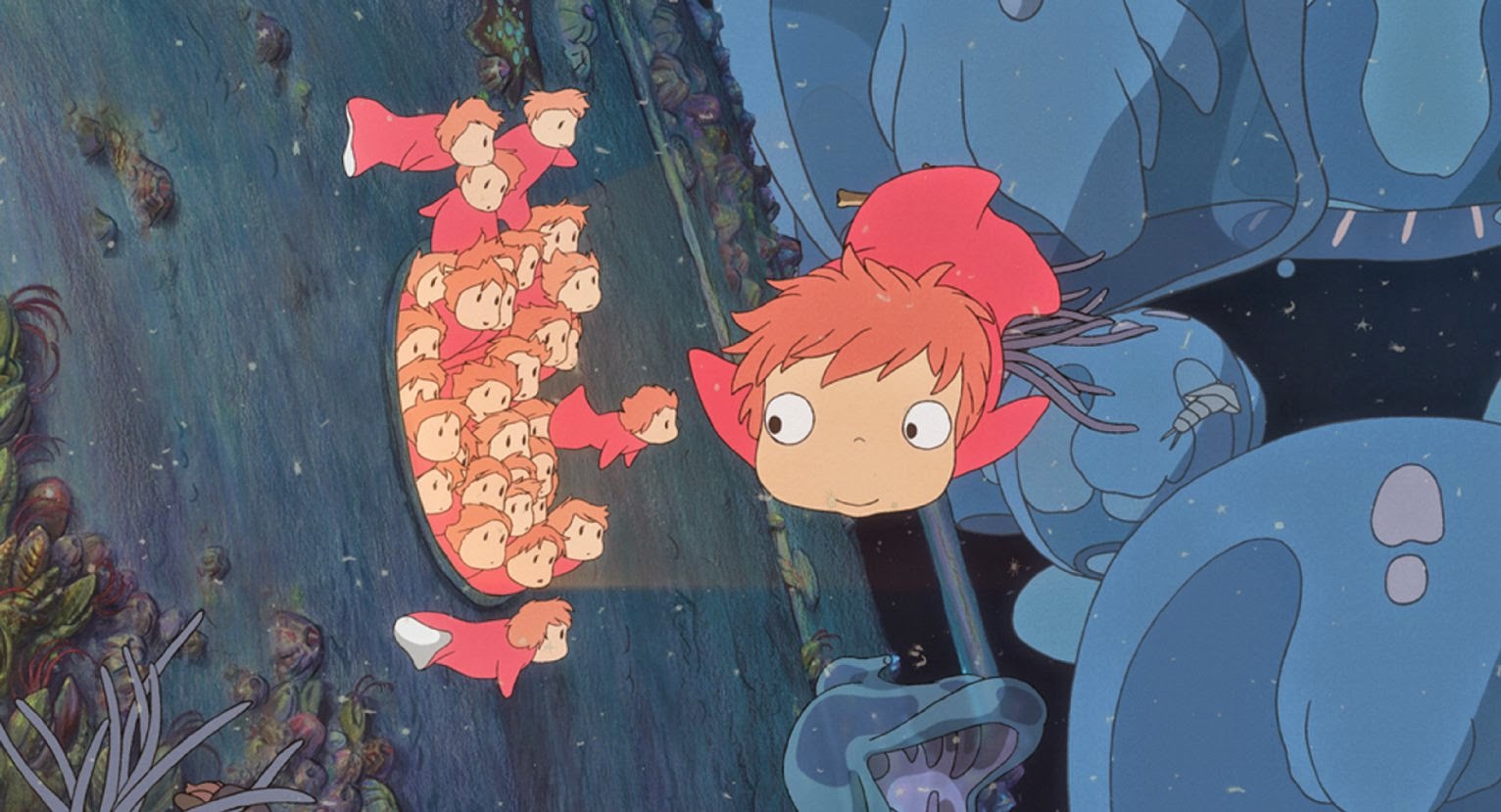 This is one of my favorite scene, where she kisses her little sisters!!
Ponyo is of course, my favorite character! ♥
Maybe I am a little biased but it's not due to that she is pinkish and is a girl, lol. I always loved nature and supernatural; her personality also shines so she easily captures my heart especially when she is super cute and kind-hearted! Some facts about Ponyo; she likes to eat ham and Brunhilde is Ponyo's real birth name! However, she likes Ponyo better as it was given by her first friend (or love?), Sōsuke. <3

Ending this post soon, the version of goddess of mercy in this movie is so gorgeous and unique!!
Ponyo (2008) Movie Quotes
Compiled some myself.. If you have the movie transcript, do share it with me!