A Longest Saturday Night At The Movies 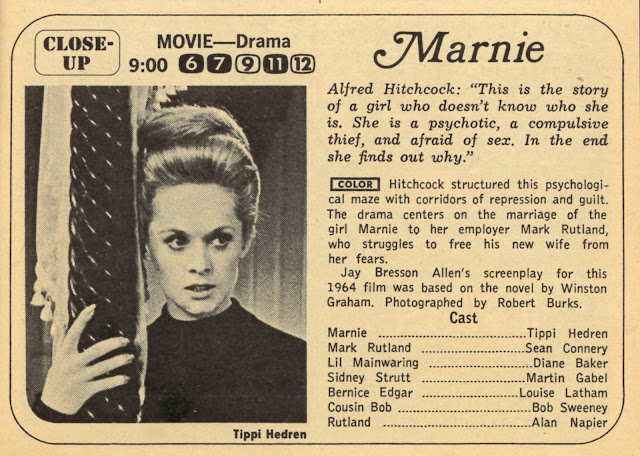 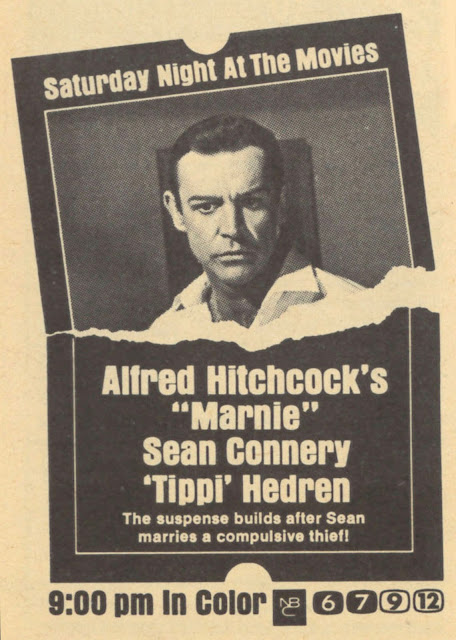 Lately re-watched this hugely unpleasant Hitchcock film, first view having been NBC's Saturday Night At The Movies. This was Marnie's TV premiere, November 4, 1967, and site where many millions more saw it than in theatres. Whatever mass opinion there was of Marnie, at least during the 60's, would be formed here, and from NBC's rerun on 6-11-68. The November airdate scored a 26.4 rating, among highest that season for an NBC movie, the encore seeing 19.5 (The Birds, shown 1-6-68, would be a ratings phenomenon with 38.9). What really hurt Marnie, then and in retrospect, was how long it took both evenings to get through it. NBC devoted two hours and forty-five minutes to the 130 minute film --- an already lugubrious sit swollen further by thirty-five minutes of commercials. I remember this and other nights where network movies ran way past bedtime. We didn't want them cut, heaven knows local stations did enough of that. As midnight loomed and eyes gave way to fatigue, how could anyone come away from Marnie with good impression? Yet here was where overwhelming majority would be exposed to Hitchcock's effort, and form their opinion. 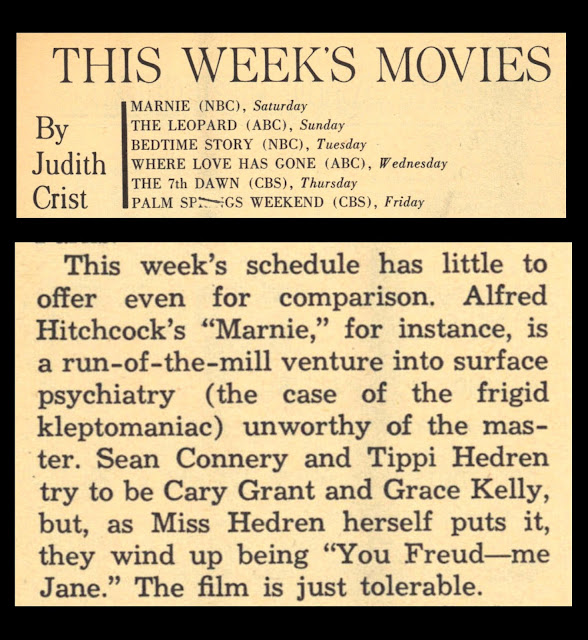 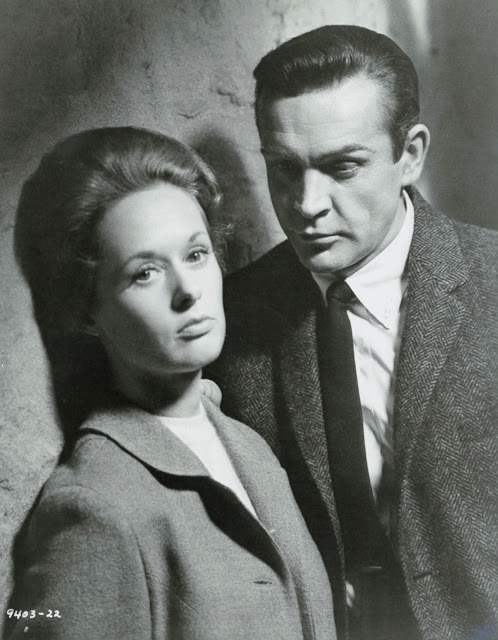 It made little difference what critics wrote where a film was so weighed down. Pauline Kael said Marnie was Hitchcock"scraping bottom," while Robin Wood judged it a masterpiece. I had not read either of them for being thirteen and not yet a subscriber to highbrow journals. What I and other TV Guide readers had (millions across the land) was Judith Crist and her weekly column of picks and pans. Just as there were infinitely more who saw Marnie on NBC than on paying basis in theatres, so too did Crist readership soundly overwhelm Kael followers. So how come so many venerate Kael still, but forget Crist? When Kael died (9-3-2001), there was tribute galore, while Crist passed on (8-7-2012) with far less notice. Perhaps it was case not of how many read you, but who. Crist was the name known to me in 1967, not Kael. She didn't like Marnie either ("just tolerable ... unworthy of the master"), which probably flipped at least a few hundred thousand viewers to Hogan's Heroes/Petticoat Junction that 1967 night, or Dale Robertson in The Iron Horse over at ABC. 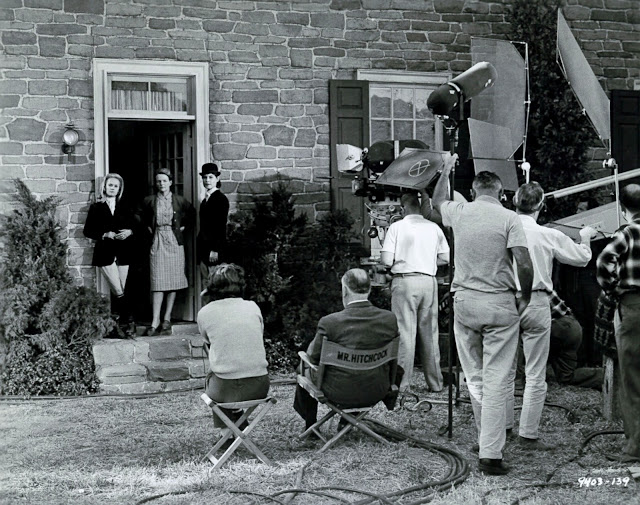 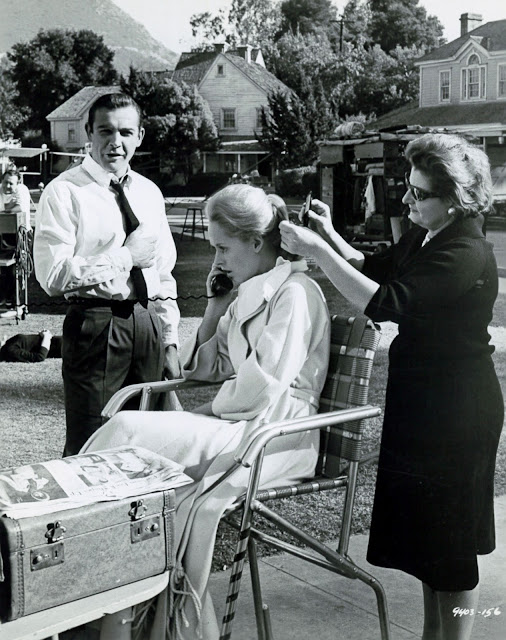 Marnie today is at least every visual thing you want it to be, thanks to a lovely Blu-Ray in proper 1.85, or similarly broadcast on various satellite channels in HD, a fair shake at last for a Hitchcock so long in the shade. Marnie falls in the ten year category for me, that being how often I've come back to it, with reaction differing each time. At thirteen, I was too young to fully get it, overpraised it once I finally did, and now realizing this last might be a final watch. Does there come turning point for a show that's been in our lives from childhood, or at least adolescence, where we ask, Will I ever be here again? That's mortality that whispers often as I look at familiar films with mixed emotion and figure maybe it's a last visit, that less thinking my time is closing in thanrecognition that there are a thousands others I want to see before bells toll, so why drop another 130 minutes on Marnie? Wouldn't increasingly precious hoursbe better spent with North By Northwest? (speaking of long ones) 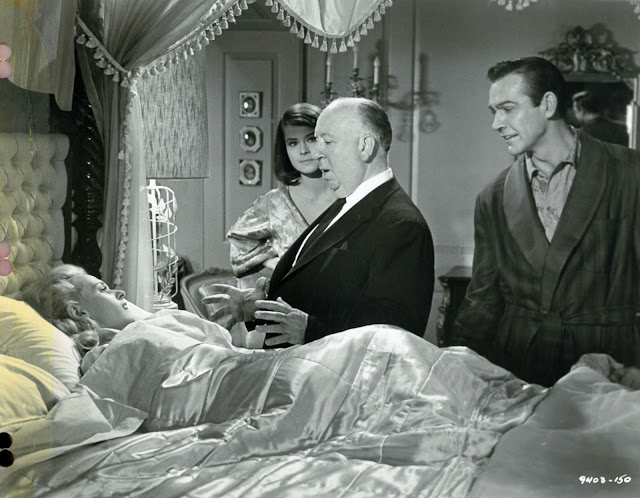 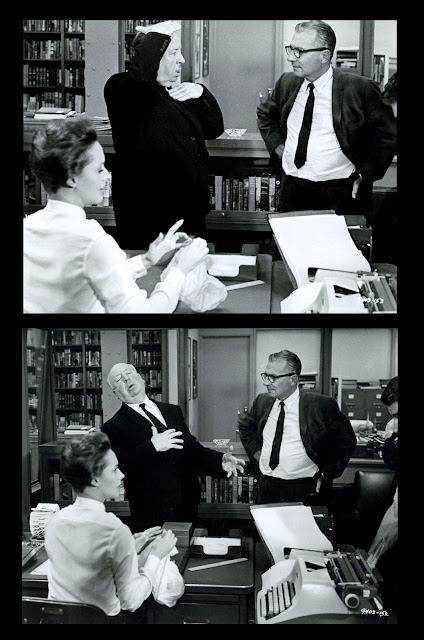 Marnie is filled with good moments. Great ones, in fact. Marnie's robbery of the safe as a hard-of-hearing cleanup woman mops outside, the storm and "stop the colors!" that lead to a closer-than-close up kiss, and best of all, the camera slow closing in on party arrivals of which Marnie's nemesis Strutt (Martin Gabel) is last to arrive (a highlight similar to Hitchcock's long approach to the key clutched by Ingrid Bergman in Notorious). What the director needed, but didn't have, for Marnie, was an actress of Bergman's capacity to play the title role. Tippi Hedren invites no interest, let alone sympathy, at least from me. It isn't that Hedren is a bad actress. I understand too little of the craft to properly criticize those who apply themselves to it. Where do ones of us who've never seriously acted come off razzing those who have? In the end, it's a purely instinctive response. I don't enjoy Tippi Hedren as Marnie because she projects no vulnerability, as I believe a Bergman would (too old by 1964, I realize), or Hitchcock's first choice, Grace Kelly might have. It's no good to spend a whole movie recasting the main part. This time I leaned toward Eva Marie Saint as possible substitute. Next time ... but wait, there might not be a next time. 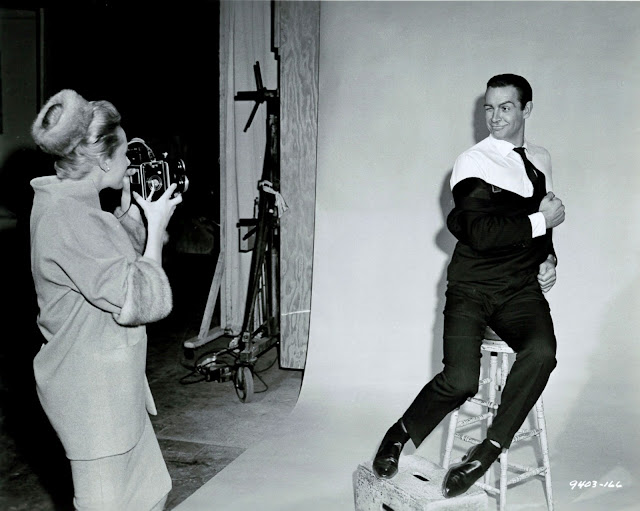 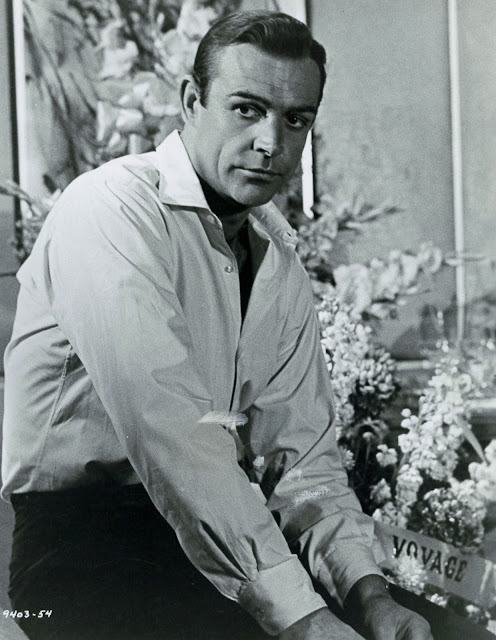 All movies, at least competent ones, invite us to identify with a character. For women here, it would presumably be Hedrin as the title character, which puts me to wondering how women generally react to Marnie, outside of Kael and Crist, that is. She's any man's worst nightmare for sure, the more so because Hedrin plays so utterly nasty to Mark Rutland as done by Sean Connery. "Frigid" but barely describes Marnie ... she's more a floating iceberg. I don't believe for a moment that last act revelations will straighten this woman out. So what if she now knows it was her that clocked Bruce Dern, that a small valise among baggage Marnie carries. The character is so hardened, so cruel to Connery, his long suffering what a male audience will likeliest identify with, and be discomfited by. It's as though 007 were trying to make a proper wife of villainesses he had to cope with in Bond vehicles wrapped around release of Marnie (the film came betweenFrom Russia With Love and Goldfinger). Connery's Mark Rutland plays the fool for a woman he cannot sleep with, and because it's Hedrin rather than a more appealing actress as Marnie, we lose patience with him. What pleasure comes of seeing James Bond made impotent? I'd guess at least Hitchcock felt for 's plight, intensely so, if we are to embrace backstage accounts of his obsession withTippi Hedren. 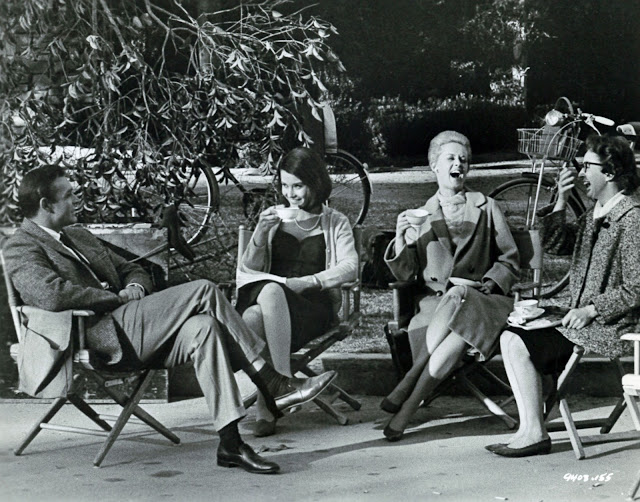 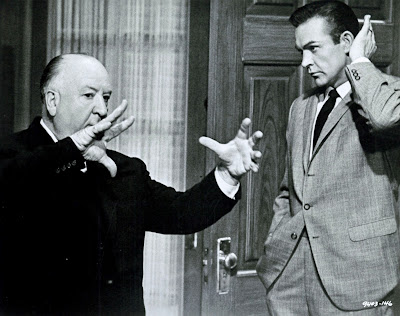 Marnie was difficult to market, a biggest problem since Vertigo for Hitchcock. The previous three had been naturals: North By Northwest with Cary Grant and built to crowd-please, Psycho and outrage of its shower killing, The Birds with spectacle, if less suspense (those around in 1963 will remember talk this one aroused). Hitchcock admits in his Marnie trailer that it is "hard to classify." I can hear Lew Wasserman whispering the same off-camera. The preview asks, "Is Marnie"A Sex Story?, a Mystery?, a Detective Story?, a Story Of A Thief?, a Love Story?" Answer: Yes, and More! Hitchcock had to worry of critics and viewers saying Marnie was actually none of these, at least to effective degree. And critic approval did matter to Hitchcock, in fact too much so by 1964 and worship of him by the Cashiers du Cinema crowd. Central problem: Ads couldn't convey what Marnie was about, and that was deadly for any film, even a Hitchcock. Print promotion, like the trailer, would ask more questions than answer. Disappointment with boxoffice was probably seen coming by sales staff, if not the director. Wasserman would have felt justified slipping tighter leash on his auteur trophy. Their next, Torn Curtain, would be more his picture than Hitchcock's.

A Longest Saturday Night At The Movies