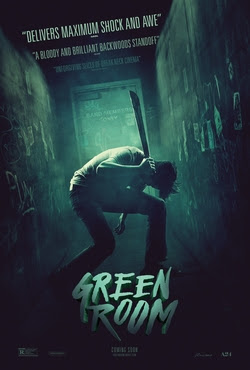 Green Room is a 2016 horror thriller. Directed by Jeremy Saulnier (Blue Ruin) and starring Anton Yelchin (Fright Night), Imogen Poots (also Fright Night) and Patrick Stewart (X-Men). This was the last Film to be released before Yelchin's tragic death in 2016.

The film follows a hardcore punk Band brilliantly called "The Ain't Rights" as they tour the pacific northwest. When one of their gigs falls through, a replacement show is arranged out of town which turns out to be held in a neo-Nazi skinhead club. Presumably too punk to care, the band play anyway and things are going surprisingly well until they return to the green room to find a young girl has been murdered by one of the skins. A deadly game of cat and mouse ensues as the band become trapped in the green room, along with Amber (Poots) and "Big Justin" (a skinhead enforcer), as club owner Darcy (Stewart) makes it his mission to violently remove the band from the situation.

Green Room is a Hitchcockian exercise in high tension thrills with an incredibly gritty ultraviolent coat of paint. The film itself is shot through a grimy, greenish filter and really sucks you into the hopeless situation that the band find themselves in. This is enhanced by some extremely graphic violence, but warranted given the context, and the visual of Poots tightly gripping her boxcutter (before doing something horrific) will stick in the mind longer than you want it to. The late Anton Yelchin is the emotional core of the film (supported by Arrested Development's Alia Shawkat) and we quickly see his punk bravado melt away and reveal the scared little boy in the face of the highly dangerous situation.

I liked the way that the film didn't completely confine itself to the "green room", as I was expecting, but rather had it's protagonists test the waters every now and then by attempting to venture outside. Although the film was very realistic, I did have some problems with what I felt were some slightly far fetched plot holes. Why would the band agree to play a neo-Nazi compound? Could they possibly have escaped sooner than they attempted to? Also, although he did his best, I found it pretty hard to take Patrick Stewart seriously as an evil Nazi crime lord.

Top marks for being the bleakest film to be released this year (and in cinemas no less!), Green Room is not for the faint of heart. For every band that's found themselves playing a slightly suspicious gig, or anyone who's ever found themselves in the wrong pub in the wrong part of town. This is that feeling turned all the way up and makes for a terrifying, thrilling and sometimes nauseating experience that you won't soon forget.

What did you think of Green  Room? Did you find the film too intense?