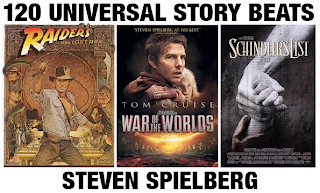 To learn much more about all 120 minute-by-minute beats, and how to apply them to your screenplay, TV pilot, novel or graphic novel, order Something Startling Happens: The 120 Story Beats Every Writer Needs To Know at Amazon.com or Barnes & Nobles. http://shop.mwp.com/products/something-startling-happens-the-120-story-beats-every-writer-needs-to-know

And try the #1 Bestseller, The Screenwriter's Fairy Tale: The Universal Story Within All Movie Stories: http://www.amazon.com/The-Screenwriters-Fairy-Tale-ebook/dp/B007U6D0CM/ref=sr_1_1?s=digital-text&ie=UTF8&qid=1348519200&sr=1-1&keywords=the+screenwriter%27s+fairytale+the+universal+story+within+all+movie+stories

Kim Kardashian Breaks Down in Tears A…
Self-proclaimed ‘M30 King of Fresno,’…
Raum-Blick – Wohnaccessoires
Jim Morrison Beard – A Guide to Growi…
How Do You Start An NFT Marketplace P…