THE NEW FRIENDS...The President-Elect hasn't even taken office yet, but change has already come to TV Land. NBC, former home of "The Cosby Show," has announced it is developing a comedy based on comedian's Nick Adams book Making Friends With Black People. The Mara Brock Akil (creator of "Girlfriends")/Salim Akil produced series will be a buddy comedy focusing on the state of race relations in the U.S. The Akils, who also exec produce "The Game," will write the script, which will center on two close friends--one African-American and one White who don't necessarily see things the same way. Universal Media Studios and Industry Entertainment are behind the project. Adams will serve as a co-producer on the project. America proved i was ready for a Black president, now it it ready to laugh a race relations? Ratings will tell.

The Friday Roundup – Originality, You…
A Guide To Visiting Antigua, Guatemal…
VPN providers should strictly follow …
NBA Jam Game Comparison
LIVE ANOTHER DAY...Even though the industry was buzzing a bit last week on the recent cancellation of "Lipstick Jungle," NBC must still obviously believe in the Candace "Sex In The City" Bushnell series. Fasten your seatbelts because Bushnell is getting second chance. Seems the folks at NBC think the series, starring not a single African-American character, just needs a bit of retooling. Ah, if only some of the "shows of color" could get these resuscitation and over-the-long-haul commitments from the networks as well.
NOT IN OUR NEIGHBORHOOD...In international news, seems South Africa isn't too impressed with Hollywood. One community in the country known for its own thriving film production business recently nixed plans for a $14 million-Hollywood-style studio. Residents of Pella said they'd rather keep their "sacred" scrubland, which was won in battle by their forefathers, than become home to the studio that promised to attract A-list celebrities due to the growing trend of Hollywood productions being filmed on the continent. The project was proposed by Desert Star Studios and would have included a studio, production offices, stunt tracks, storehouses, workshops, a luxury resort, golf course, and private landing strip. The deal would have also created 18,000 jobs. Despite the lure of much-needed employment and cash flow, the people of Pella can't be bought--even by Hollywood.
DARN, DARN, DARN, DARN!...Talk about letting an idea marinate. The Wayans Brothers first announced their intention to bring Seventies TV series "The Munsters" to the big screen in 2004. Well, Shawn Wayans has just told MTV News that the project is finally about to start--as soon as they wrap the dance spoof Dance Flick. But, says Shawn, don't expect a Black cast. According to the Wayans brother, the characters will remain true to the original--White and green.

CAN YOU HEAR ME NOW...Here's another reason to keep you tied to your Blackberry--or at least VH-1 hopes so. The network and mobile application development agency Mobui have just launched the new "VH1 Watch and Discuss Live Chat" application with AT&T. This app lets you use your mobile phone to discuss VH-1 programming in real time by instant messaging with friends, fans, and--get this--VH-1 celebrities. With the popularity of the network's reality shows, chatting with pseudo celebs like Miss New York should boost business for Vh-1.

TV TIDBIT...Reported recession got you down? If so, this could be good for TV ratings. Or so a new study found. Unhappy people watch television 30% more than happy people--regardless of education, income, age and marital status. The survey polled nearly 30,000 American adults between 1975 and 2006 as part of the General Social Survey. The survey however could not determine with people tuned in to get cheered up or to wallow in their moody state. Judging from the number of hit sitcoms on the air, we surmise the latter.
QUICK TAKES...After 14 seasons, Fox has plugged the plug on "Mad TV."

But word is producers--which include Quincy Jones--are looking into ways to keep the show alive maybe on another network...Jessica Alba (pictured) is teaming up with Casey Affleck for the Michael Winterbottom-directed The Killer Inside Me, an adaptation of a novel from noir author Jim Thompson...While the other "I Want To Work For Diddy" contestants hated on Kim (AKA Poprah), VH-1 feel in love with the trash-talking diva enough to give her a dating reality show based on the entrepreneur-wannabe's newly launched website BIGGIRLSONLINE.COM...The A-List said to watch out for young actress Keke Palmer. Well, now in addition to her hit films, her Nickelodeon series "True Jackson, VP" premiered to the channel's largest live-action series premiere audience ever for kids 6-11 (2 million), tweens 9-14 (2 million) and total viewers (4.8 million). Can we spot 'em or what?... Samuel L. Jackson has just signed on for Blown, opposite Jim Caviezel ("The Passion of the Christ"). The London spy thriller will be directed by British filmmaker Martha Fiennes...The L.A. theatrical production on Not A Genuine Black Man is fast generating a buzz. The semi-biographical dramedy is a one-man show featuring comedian/actor Brian Copeland (The Bucket List) is currently playing a limited run at the Hudson Theatre in Hollywood, CA. Loosely based on his personal experiences of “living as a Black man” in America, Copeland provides thought-provoking insights into the African American experience.
COURT IS IN SESSION...The jury is being selected for a court case involving actor/director Tyler Perry who is being sued over a film script. The copyright infringement case is being held in Marshall, TX. and in it screenwriter Donna West claims Perry's film Diary of a Mad Black Woman was "copied largely from the her copyrighted script." West is suing Perry, Tyler Perry Company Inc. and Lions Gate Entertainment Inc. Perry showed up for the first day of jury selection. And no, he didn't have on his Madea outfit. But odds are if he loses, Perry won't be doing community service like his alter ego.
HIP HOP HOLLYWOOD
CALL HIM BROADWAY JOE...As hip hop continues to prove it has crossover potential into various arts arena, rapper Jim Jones has just wrapped his own off-Broadway show about his life written and directed by J. Kyle Manza. The limited-run Hip Hop Monologues: Inside The Mind Of Jim Jones pulled in an impressive crowd--from theatre-goers to celebs to NY society. Could a bio pic be far off?

According to reports in BusinessWeek.com, two African-American women are rumored to head Obama's FCC Chairman short list. Julia Johnson, a Florida consultant who serves as chairman of the Video Access Alliance, an advocacy and advisory group for emerging, independent and minority networks and Internet content providers, is one. Another possibility is Mignon Clyburn, who has been a commissioner for the Public Service Commission of South Carolina since 1998 and who has a background in journalism. Clyburn also is a daughter of House Majority Whip Jim Clyburn.

EXECUTIVE MOVES
JOURNALIST STEVEN HOLMES JOINS CNN
Washington Post's Steven Holmes is to join CNN as director of standards & practices. Holmes, most recently national domestic policy editor, will become the network's Executive Director for Standards and Practices. The department oversees and vets controversial pieces. At the Post for three years, Holmes spent the previous 15 at the New York Times as a reporter and editor in the Washington bureau.

LIVE PERFORMANCE REVIEW
AIN’T MISBEHAVIN’
Atlanta Opening Night
A revival of the Tony Award-winning musical, Ain’t Misbehavin’ ( http://www.aintmisbehavinontour.com/), traveled to Atlanta’s Fox Theatre on Tuesday evening. In celebration of the show’s 30th Anniversary, the new cast is headlined by two famous alums of "American Idol"– Ruben Studdard and Frenchie Davis. In spite of the unseasonable, winter-like temperatures (but encouraged by the “recession special” ticket price reduction), the cast performed to an intimate crowd. Having just debuted one-week prior in NY, the cast seemed overly rehearsed during the first act. Nervously concerned with hitting the right notes and stage marks, a connection with the audience (and each other) eluded them. However, the power and delivery of the second act, made up for that disconnect! It is here, that the vocal and performance ranges soar to new heights.
Ruben shines with humor in his rousing rendition of “Your Feets Too Big,” while joining fellow cast mate David Jennings on “Fat and Greasy” as they enlist the crowd in call-and-response.
There were two break-out talents – Trenyce Cobbins and newcomer Patrice Covington. A lesser-known contestant on "American Idol," Trenyce is pure talent! Her vocal range, acting chops and command of the stage is inviting – you simply cannot take your eyes (or ears) off of her! Ditto for Covington, whose distinctive voice consistently brings her to the forefront. --Raegan L. Burden for The Robertson Treatment 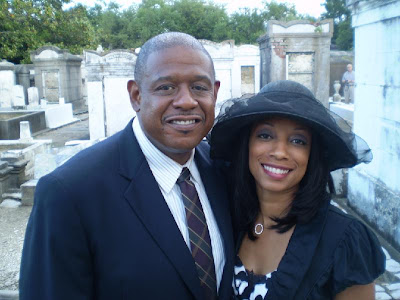 Lawyer-turned-actress Jalene Mack posin' with Forest Whitaker on the New Orleans set of Hurricane Season. The 2009 Dimension Films release also stars Isaiah Washington, Taraji P. Henson, Bow Wow, Courtney B. Vance and Lil' Wayne. The movie is based on the story of Al Collins, basketball coach for John Ehret High School in Marrero, LA, who led his Patriots to the state championship a year after Hurricane Katrina ravaged the school.