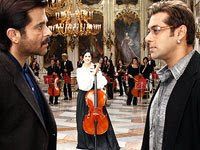 Yuvvraaj is a 2008 Indian film starring Anil Kapoor, Salman Khan, Zayed Khan and Katrina Kaif based on the classic Hollywood movie Rain Man. It is produced and directed by Subhash Ghai. American Jacob "Coby" Hadas makes his Bollywood debut with a small part in this film. Ghai's favourite, A.R. Rahman, will be providing the music for this film. The film is slated to be released on November 21, 2008. Yuvvraaj is a musical story of a fragmented family of three brothers Deven Yuvvraaj (Salman Khan), Gyanesh (Anil Kapoor) and Danny (Zayed Khan) fighting and playing games with each other to inherit their father's wealth. Deven Yuvvraaj  is a struggling singer who signs an agreement with his girlfriend Anoushka’s (Katrina Kaif) father Dr. Banton (Boman Irani) to be a billionaire in 40 days. To acquire this wealth, he has to go through an emotional roller coaster journey of joy and pain with his two estranged brothers Gyanesh Yuvvraaj  and Danny Yuvvraaj  who he meets after 12 years. On meeting them, he realizes that they are two individuals who are completely opposite to each other, which makes his task all the more difficult.

Deven Yuvvraaj is an easy cool guy for whom life begins with himself and ends with his love Anushka. A quarrel with his father was reason enough for him to leave home and live as a struggling singer. Devoid of family values he is forced to journey through the circle of love for the sake of money to complete his love story. And as he journeys he softens into a likeable and lovable character.  Gyanesh Yuvvraaj is the centerpiece of all action. An autistic savant, he is completely removed from the idea of money and therefore his enormous inheritance has no impact on him. All he wants is love. He withers without it. By some stroke of destiny he has a genius disorder. Since childhood he was brilliant in all aspects of music. He enters Deven’s world of music and effortlessly becomes the superstar that Deven dreamt of being. Danny Yuvvraaj is the real prince who lived life super-large. A passion for flying kept him floating on an air-cushion filled with his father’s money. A playboy and a brat he was sure that the inheritance would be his. Unable to deal with the loss of his playground (as casinos and clubs threw him out) he strikes at Gyanesh in an attempt to get back what he thought was rightfully his.Anushka is a beautiful, angelic girl passionately in love with her cello and Deven. A girl of very high values she refuses to marry Deven unless her father accepts him willingly.