Telltale Games is back with another The Walking Dead adventure game. This time the game focuses on Michonne, a popular character from the TV show and the comics. While Telltale continues to hone their craft, there isn’t much memorable from the first episode of this miniseries.

“In Too Deep” is the first of three episodes in The Walking Dead: Michonne. As you may have guessed, the player controls Michonne after she finds herself with a new crew in Chesapeake Bay. They are sailing around the bay looking for supplies and more survivors. Like the previous games, you’ll encounter zombies and characters who are looking out for their own survival. 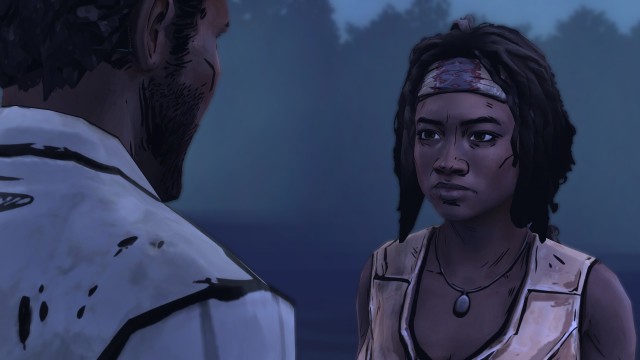 Michonne is a character with a disturbed past that is touched on a few times throughout the first episode, but I didn’t feel like the game did a good job of making her an interesting character. As someone who doesn’t read the comics nor watch the TV show, it could be my fault and fans of both will find her intriguing. Samira Wiley voices Michonne, and does an okay job. It isn’t anything special, and the voice work of the other characters outshines her performance.

An area that The Walking Dead: Michonne has improved over previous The Walking Dead games is the action sequences. I felt like they moved at a better pace, and required more button inputs. There was more of a sense of urgency when surrounded by zombies. Michonne’s weapon of choice is a machete, and it is a lot of fun to hack through zombies.

The plot of episode one follows Michonne and Pete, the captain of the ship, as they investigate a grounded ferry for supplies. When investigating the ferry, they find other scavengers that mixes them up with the wrong group of people, and Michonne and Pete get taken captive by a group of some morally questionable people. Like many The Walking Dead games, the episode ends on a cliffhanger after some crazy events. While The Walking Dead: Michonne isn’t a bad entry into the series by any stretch, it just feels very tried and true. There wasn’t anything super interesting or memorable in the hour and a half that it takes to play through episode one. I also ran into some bad frame rate problems on PC, which really hurt the experience.

I’d recommend The Walking Dead: Michonne to the biggest fans of the comics and TV show. If you’re an outsider like myself that is looking for the same experience you got from the original The Walking Dead game, I don’t think you’ll find it here. Maybe there rest of the season will improve, but this was a weak first episode given what the studio has produced in the past.

The post Review: The Walking Dead: Michonne – Episode One appeared first on onPause.