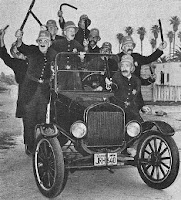 Mack Sennett was the name behind those famous Keystone Cops. And in the early days of silent film, he was the undisputed king of comedy.

And Mack Sennett had one rule for his gag writers: No "think" gags allowed.

The explanation went something like this: When the audience is thinking, they can't be laughing. (Mack Sennett obviously did not believe in multitasking.)

The punchline of the joke has to be a gut reaction. And if you're being forced to think about it... you'll probably miss the joke. Which is the whole idea behind slapstick comedy. When you see that cream pie, you know that it's gonna end up in someone's face. And usually the face of someone serious, like the President of the United States, or the old lady librarian.

A young Frank Capra spent some of his early filmmaking days working for Sennett. In his autobiography, when he discussed this phase of his career, he pointed out a flip side that is also true: "When the audience is laughing, they can't be thinking."