The Camera Lies, You Know 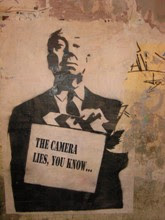 When it came to understanding the camera, Hitchcock was a master.

He had all sorts of tricks up his sleeve. But sometimes the people working with him didn't understand his "sleight of hand".

There's a story about one actor who learned this while on set. The film was Shadow of a Doubt (1943). The scene: a family dinner.

At one point, one of the actors is supposed to rise in reaction to another character. Hitchcock told him to do this abruptly. The actor did, pushing off his chair and stepping back.

HITCHCOCK
That's all right, Hume, but rise and step in.
ACTOR
Toward Teresa?
HITCHCOCK
Yes, step in and lean forward.
ACTOR
But she's just said something very offensive.
HITCHCOCK
I know.
ACTOR
But... yes, sir.

It's Time To Rebuild
Ways To Make Money From Home
This Is What You Should Do If You’re …
The Power of Support: In Weight Loss …
Businesses can be revolutionize
Thinking this direction was "completely false", when Hitchcock asked for another take, the actor repeated the original movement by stepping back.

HITCHCOCK
You've done it wrong again.
ACTOR
I know. I'm terribly sorry. It just feels so uncomfortable.
HITCHCOCK
There's no law that says actors have to be
comfortable. Step back if you like--but then
we'll have a comfortable actor without a head.
Finally, the actor did it Hitchcock's way.

HITCHCOCK
Come and see the rushes... You'll never know
which way you stepped. The camera lies, you
know--not always, but sometimes. You have to
learn to accommodate it when it does.
[Original Photo by fredpanassac]


This post first appeared on A Moon Brothers Film..., please read the originial post: here
People also like
It's Time To Rebuild
Ways To Make Money From Home
This Is What You Should Do If You’re Laid Off
The Power of Support: In Weight Loss Goals
Businesses can be revolutionize
X-Ray tube repair & common causes of tube failure
SALVADOR DALI AND RELIGION

The Camera Lies, You Know