Questions for an Open Call Audition 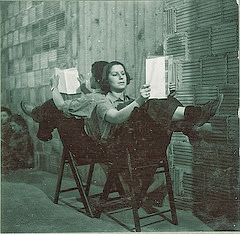 We're holding an Open Call Audition in Niagara this Saturday. (If you're interested in more details, go to our website at http://www.cubecity.org/auditions_on.htm )

We often get questions from new actors about some audition terminology that is unfamiliar to them. Questions about what it means to slate. Or who can come to an open call audition. Or what a cold read means.

We've put together a series of questions and answers about auditions that will hopefully be of help to you...

Q: What is an Open Call?
A: When an audition is labelled "Open Call", it means it's open to everybody. You just show up; no appointment necessary. Depending on how many other people show up, you should be prepared to wait. Expect to be called in on a first come, first served basis.

Open casting calls are probably the one of the best ways for an aspiring actor to get noticed. Giving a good audition takes practice and if you're serious about acting, you need to go to auditions. Open Calls provide an excellent way to exercise those audition muscles.

Q: What is an Audition side?
A: An audition side is a short section of dialogue -- most likely from the script or screenplay of the project for which you're auditioning. It might be a page, or it might be several pages. It might also be a monologue. If it's a dialogue between two characters, you'll be asked to read for one of the roles, while a reader (perhaps another actor) will read for the other role.

Q: Do I have to memorize my lines for an audition?
A: It depends. If you're asked to prepare a monologue, then yes; come prepared and have it memorized. Anytime you are given the audition side ahead of time, it is also a good idea to memorize it (unless they tell you otherwise). However, if you are given the side on the day of the audition, you won't be expected to have it memorized. That's what is called a "cold read."

Q: What is a cold read?
A: When you're asked to do a cold read, it means you haven't seen the audition side until the day of the audition. The purpose of a cold read is not to test you on if you can memorize. Instead, the casting people want to see what you can bring to a character on short notice. No prep time other than the time you will have to read it over in the waiting room. Here are a couple tips about giving a cold read...
Q:What does it mean when you're asked to slate?
A: When you're auditioning for the camera, you will be asked to "slate". This basically means you say your name to identify yourself  for when the screentest is later viewed. Look directly into the camera lens, say your name clearly and confidently. Usually you do it in your own voice, rather than saying it in character.

Any other questions? Post them in the comments. We'll be happy to answer...

Questions for an Open Call Audition