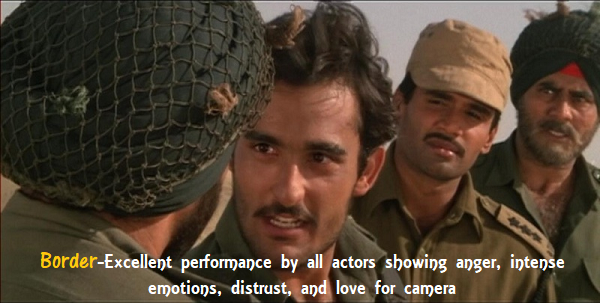 Which Bollywood Movies Are Good To Learn Acting?

These All Times 20 Bollywood Classics. More Will Be Posted On This Blog

Why Actors Should Watch Bollywood Movies

1. How To Give A Believable Performance In Various Life Situations
2. How To Play Different Emotions, Attitudes, Types Of Characters
3. How To Show Excellence In Acting For Camera
4. Able To Watch And Learn In Comfort Of Home Undisturbed

Any Suggestions For Actors While Watching Movies?

1. Don't Be An Emotionally Involved Audience And Become A Viewer Like Millions Of Cine Goers. Watch With Analytical Mind As A Critic Of  The Story And Watch Actors Performance
2. How To Do It? Switch Off The Volume In Between At Critical Moments In The Story. This Way You Will Be Focused On Performance, Only
3. Rewind And Watch Repeatedly An Actor's Good Performance

As actors, you have the coolest homework of all: You get the opportunity to watch and study truly great films to learn from some of the industry’s best artists. But where do you start?

Every actor hands down should watch these films to really learn the fine art of acting while on camera
For actors, these Bollywood classics exhibits how to a good actor can transform into new lives with different emotions, attitudes, conflicts, changing rhythm and tempo, action, silence and so on...
Secondly, because the themes and performances in these movies raise questions to search an actor's soul. How much do you have to suffer? How much do you have to sacrifice for your success? When is it too much? Do you have to be beaten down to produce this great art? Do you need to find someone a director, an acting coach, a school that will push your limits? Do you literally have to bleed for the pursuit of excellence? It’s some of the great movies down below that will make artists think about how to stay true to themselves in the pursuit of their artistic dream.

Note: The Ranking below is based on stars earned

The story of a young revolutionary who raised an armed resistance against the British rule in India. (155 mins.)
Director: Rajkumar Santoshi
Stars: Ajay Devgn, Sushant Singh, D. Santosh, Akhilendra Mishra
“Brilliantly directed by Rajkumar Santoshi, awesome performance of a legendary revolutionary by Ajay Devgan and superb music along with background score by A.R.Rahman ”

Entrapped by the notorious gangster, Khokha Singh; an honest police inspector Satyadevi Singh gets a life sentence in jail... (187 mins.)
Director: Mukul Anand
Stars: Anirudh Agarwal, Mohan Agashe, Tinnu Anand, Anang Desai
Add to Watchlist
“An average screenplay on too good storyline, but with a good direction along with technical cinematography  under the production of the second showman of Hindi movies Subash Ghai, consisting the evergreen music of the legendary Laxmiknt Pyara Lal, along with the stars like JACKIE SHROFF, ANIL KAPOOR, SHAHRUKH KHAN, PRIYA TENDULKAR, SAYED JAFFERY, TINU ANAND, MOHAN AGASHE. Also, some scenes are amazingly shot, such as Shahrukh's entry and Anil's entry scenes, Jackie-Anil meeting scene(Jackie is too good in emotional roles, he did the best performance), Anil-Shahrukh forest laugh scene and Anil saving Shahrukh from 3 goons on a hill.”

The tale begins in the final days of the British Raj in India. A cohort of engineering students graduate a few months before Independence... (175 mins.)
Director: Hrishikesh Mukherjee
Stars: Ashok Kumar, Dharmendra, Sharmila Tagore, Rabi Ghosh
“ A fabulous story of a person, believing in truth and fighting against all the evils of lie. Good movie by HRISHIKESH MUKHERJEE, and good performances by ASHOK KUMAR, DHARMENDRA, SHARMILA TAGORE. Along with average music by LAXMIKANT-PYARELAL”

Ajay's life turns upside down when he learns that his wife Piya has Alzheimer and he has no option, but to leave his wife in a mental hospital. (156 mins.)
Director: Ajay Devgn
Stars: Ajay Devgn, Kajol, Sumeet Raghavan, Divya Dutta
“Although the movie was an average on the box-office, this Ajay Devgan's directorial-debut and produced movie is full of love between husband-wife. a movie describing the true meaning of love and sacrifices, through the wow performances of AJAY DEVGN, KAJOL, and good music of VISHAL BHARDWAAJ along with the fabulous lyrics of the title song "U ME AUR HUM"

A young boy's quest for revenge leads him to become a gangster as an adult, and with each day he becomes more and more like his enemies. Can he find vengeance and redemption? (174 mins.)
Director: Mukul S. Anand
Stars: Amitabh Bachchan, Mithun Chakraborty, Madhavi, Neelam Kothari.
A great movie for actors to watch and learn

“ This Mukul. Anand's directorial, Amitabh Bachchan's acted, and Laxmikant-Pyarelal's musical and background-score is amongst the milestone. A MUST WATCH ”

“A must watch! the Hindi or Bollywood version of William Shakespeare's 'OTHELLO'. superb direction, music and background score by VISHAL BHARDWAJ, superb acting by-
Ajay Devgn 'as OMKARA or OTHELLO'
Kareena Kapoor, Konkona Sen, and the outstanding SAIF ALI KHAN as 'Langda Tyagi'.
Great combination of commercial and art cinema. A MUST WATCH!”

A man experiences a supernatural occurrence at his newly purchased apartment; a soap opera being telecast exclusively on his TV, which shows the future of his family. (137 mins.)
Director: Vikram K. Kumar
Stars: Madhavan, Neetu Chandra, Poonam Dhillon, Sachin Khedekar
Add to Watchlist
“ This R.MADHVAN, NEETU CHANDRA, and SACHIN KHEDEKAR strrer is superb horror-thriller with a very very unique storyline. greatness of this movie cud b understood well by knowing that, this movie inspired hollywood's film-maker to buy the rights and remake it in their respective language. So, i don't think there's any need to praise this movie further to make u watch it. ” - kapsindia_facebook

A quirky take on life and relationships as it looks at a fairy tale with a bit of a squint and an endearing look at what being in love really means. (158 mins.)
Director: Siddharth Anand
Stars: Saif Ali Khan, Preity Zinta, Arshad Warsi, Javed Jaffrey
A directorial super cool husband-wife comedy. ENJOY!”

Three friends decide to turn their fantasy vacation into reality after one of their number becomes engaged. (155 mins.)
Director: Zoya Akhtar
Stars: Katrina Kaif, Hrithik Roshan, Naseeruddin Shah, Kalki Koechlin
“Want to know the real meaning of Life and for what u r in this world ? just watch this movie, and u will be fascinated by its simplicity along with learning about different shades of life. WOW! film
with the great performances"

In Goa, Pritam meets his love Geeta after many years. They decide to get married but the feud between their respective children creates tension in their marriage. (155 mins.)
Director: Rohit Shetty
Stars: Mithun Chakraborty, Ajay Devgn, Kareena Kapoor Khan, Tusshar Kapoor
“Third in the series of 'GOLMAAL(2003)', a good entertainer with the blockbuster comedic
performances by all actors.

An IPS officer motivates and leads a dysfunctional, corrupt police force of Tezpur to fight against the corrupt politician. (157 mins.)
Director: Prakash Jha
Stars: Ajay Devgn, Gracy Singh, Mohan Joshi, Yashpal Sharma
“Based on a social-issue of fighting against corruption and evil-doings of politician in a remote area of Bihar. a decent movie by the director PRAKASH JHA and, noticeable background score of Hollywood's music director WAYNE SHARP. Also the item song 'chauk chaubaare...' is entertaining. ” - kapsindia_facebook

A story of a tumultuous and complex relationship between a father (Mohan Agashe) and son (Ajay Devgan), set against the backdrop of a thriving kidnapping industry in the Hindi heartland of Bihar. (173 mins.)
Director: Prakash Jha
Stars: Ajay Devgn, Nana Patekar, Bipasha Basu, Ayub Khan
"Excellent in all aspects"

Veer-Zaara is a saga of love, separation, courage, and sacrifice. A love story that is an inspiration and will remain a legend forever. (192 mins.)
Director: Yash Chopra
Stars: Shah Rukh Khan, Preity Zinta, Rani Mukerji, Kiron Kher
“A sweet love story, very well picturised by the director YASH CHOPRA[known as the director of romance in hindi film industry"-good for actors to learn how to express 'love' as an emotion for camera

Janardhan Jakhar chases his dreams of becoming a big Rock star, during which he falls in love with Heer. (159 mins.)
Director: Imtiaz Ali
Stars: Ranbir Kapoor, Nargis Fakhri, Shammi Kapoor, Kumud Mishra
Add to Watchlist
“ ROCKSTAR. word 'R' is inadequate for describing the height of this great movie. fantastically directed & written by IMTIAZ ALI, passionately performed by RANBIR KAPOOR-NARGIS FAKHRI, fabulously musicised by A.R.RAHMAN, and smartly EDITED. a completely different make of a movie, even Hollywood can learn from. A MUST WATCH!”

A great film. The Movie is an attempt to bring into limelight the Historic Battle of Longewala located in Rajasthan. The characters have been carefully chosen and developed beautifully in the movie. The Battle appears almost real with men at their respective positions as in actual battle. The intensity is high and so is the depiction of morale.
This film is another working of a fantastic experienced talent of J P Dutta. the characters in the film really do shine and bring out the best performances. Rarely has an Indian movie depicted the personal traumas that confront soldiers and their families, truthfully exhibited by actors.
Border is the best war movie with mind-blowing action. Everyone gave powerful performances, lead by the star, Sunny Deol. He was perfect as the brave Sardarji army man, and this is definitely his greatest performance of the 90's (even more intense than Ghayal, Ghatak, Ziddi).
As an Actor, you have to learn a lot from this movie

Join us for 'One on One' private acting coaching