Your Mental Sorbet: Mel Blanc in the "Hunting Trilogy" 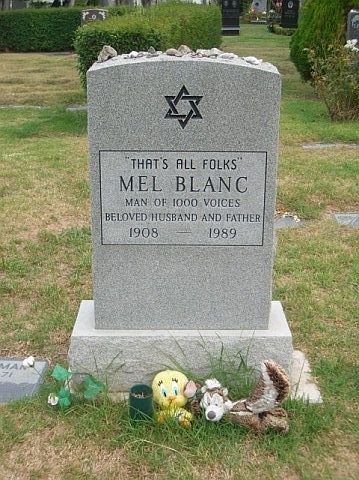 On May 19, 1989, Mel Blanc was checked into Cedars-Sinai Medical Center by his family when they noticed he had a bad cough while shooting a commercial; he was originally expected to recover. While sleeping in his hospital bed, Blanc accidentally fell and broke his femur resulting in fat embolism in the brain. He died on July 10 at Cedars-Sinai Medical Center in Los Angeles, California at the age of 81.
He was interred in the Hollywood Forever Cemetery in Hollywood, California. Blanc's will stated his desire to have the inscription on his gravestone read, "THAT'S ALL FOLKS" (the phrase was a trademark of Blanc's character Porky Pig).


Here is another "Mental Sorbet"
A little spark of madness
that we could use to momentarily forget about those
things that leave a bad taste in our mouths
Rabbit Fire is a 1951 Looney Tunes (reissued as a 1960 Blue Ribbon Merrie Melodies) cartoon starring Bugs Bunny, Daffy Duck, and Elmer Fudd. Directed by Chuck Jones and written by Michael Maltese, the short is the first Film in Jones' "hunting trilogy"—the other two films being Rabbit Seasoning and Duck! Rabbit, Duck!. It is also the first film to feature a feud between Bugs and Daffy. Produced by Edward Selzer for Warner Bros. Cartoons, Inc., the short was released to theaters on May 19, 1951 by Warner Bros. Pictures and is often considered among Jones' best and most important films.
The film marks a significant shift in Daffy's personality, going from being the insane "screwball" character who (like Bugs) overwhelmed his adversaries, to being a much more flawed individual, full of greed and vanity and desiring for attention under the spotlight.

Your Mental Sorbet: Mel Blanc in the "Hunting Trilogy"