Tippi Hedren, Rich Little plus The Year in Television: Next on TVC

Actress Tippi Hedren and celebrity impersonator Rich Little will join us on the next edition of TV CONFIDENTIAL, airing Jan. 20-23 at the following times and venues:

Share-a-Vision Radio
San Francisco Bay Area
Friday 1/20
7pm ET, 4pm PT
10pm ET, 7pm PT
Click on the Listen Live button at KSAV.org
Use the TuneIn app on your smartphone and type in KSAV
Hear us on the KSAV channel on CX Radio Brazil
Hear us on your cell phone or landline number by dialing 712-432-4235

Indiana Talks
Marion, IN
Saturday 1/21
8pm ET, 5pm PT
Sunday 1/22
6pm ET, 3pm PT
Click on the player at IndianaTalks.com
or use the TuneIn app on your smartphone and type in Indiana Talks

PWRNetwork
Ann Arbor, MI
Various times throughout the week
on the Entertainment Channel at PWRNetwork.com
and the PWR channel on TuneIn

Film buffs know Tippi Hedren as the star of the classic Alfred Hitchcock films The Birds and Marnie—an experience that, in many respects, was both the opportunity of a lifetime and a nightmare come true. While the story of Tippi’s complicated relationship with Hitchcock has been told countless times by other people, it’s never been told by Tippi herself… until now.

Hedren’s memoir, Tippi, sets the record straight, revealing never-before-told stories about the torment that Hitchcock put her through during the filming of their two collaborations. But it also shows the strength and spirit that has defined Tippi throughout her life—and how that strength was put to the test time and again during the making of Roar, the ambitious independent film that Tippi produced and starred in (along with dozens of live lions and tigers) that is not only one of the most notorious film productions of all time, but fueled a passion for wildlife preservation that continues to this day. Tippi Hedren will join us in our second hour.

Also joining us this week will be America’s Master Mimic, Rich Little, the man who has impersonated the voices of countless showbiz figures and politicians over the past six decades. Since Inauguration Day is soon upon us, and given that Rich is known for his impersonations of the past ten sitting U.S. presidents, we’ll ask if he’ll be working Donald Trump into his repertoire anytime soon. We’ll also learn the difference between an impressionist and an impersonator, how Rich takes an actor’s approach to mastering voices, and how he nearly made his national TV debut without any pants. Rich Little will join us near the end of our first hour. 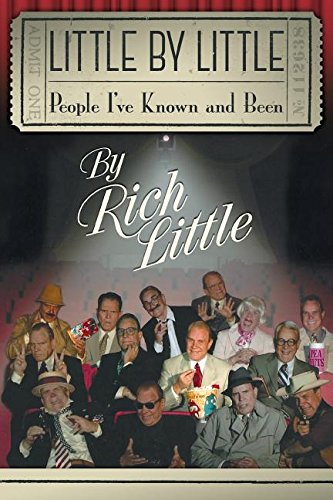 Rich Little recently completed principal photography on Futurama: The Movie, in which he plays the voice of Richard Nixon's reanimated head. His new book, Little by Little: People I’ve Known and Been, features stories and anecdotes about thirty of the most famous people that Rich has impersonated over the years, including George Burns, Jack Benny, Ed Sullivan, James Stewart, Dean Martin, Robert Goulet, Richard Nixon, Orson Welles, John Huston and John Wayne. The book also includes charcoal sketches of each celebrity that Rich discusses in the book—all done by Rich Little himself—plus about 100 photographs, many of which are in color.

This week’s show will also include our annual look at some of the major stories that helped shape this past year in television. Foremost will be a discussion of how TV covered the 2016 presidential election.

If you listen to TV CONFIDENTIAL, and like what you’ve heard, please consider supporting our efforts by becoming a patron of our show through Patreon. It’s easy to do, it does not cost much, plus you can receive some cool rewards (such as coupons that will allow you to download up to six free programs every month from the TV CONFIDENTIAL Archives store). For more information, please visit www.Patreon.com/tvconfidential... and thanks!

Signs That You’re In A Healthy Love R…
Schema Markup, Types & Why is It Impo…
CBD 2020: What to Expect + Our Top Pr…
Analyst Believes that Ethereum Prices…
How to Love Mondays and The Rest of T…

Tippi Hedren, Rich Little plus The Year in Television: Next on TVC