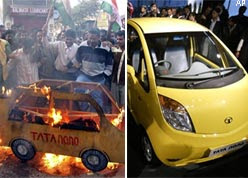 As Ratan Tata drove to the ramp what was perhaps the most-hyped four-wheeler of the year, excitement was palpable at the Auto Expo show in New Delhi. Christened Nano, and famously priced at Rs 1 lakh (about $2700), the car was unveiled on Wednesday to a thunderous applause.
Designed for the mass market, the Nano has been hailed as the defining moment of the history of the Indian automobile industry and the one that will make possible a consumer revolution of sorts.
However, it has only a 624 cc petrol engine and can’t run effectively on the highways. Even the famed Rs 1-lakh tag is not really that. The car will cost the consumer close to Rs 1.2 lakh after all taxes have been levied.
CNN-IBN show Face The Nation asked the question: Is Tata’s Rs 1-lakh car more of a marketing hype than real consumer value?
On the panel to try and answer the question were Chairwoman VGC, Preeti Vyas Gianetti, Director CSE, Sunita Narian and editor, Autocar India, Hormazd Sorabjee.
Is Nano truly a people’s car?
Since the Nano is the next big thing and there has been huge media hype over the car, should an automobile be hyped in this way? Should it be given this much glamour given the costs of car in today’s times?
Preeti Vyas Gianetti was of the opinion that if one had such story to tell then the punches shouldn’t be held back. She felt that the Tata Group had made an appropriate display of the kind of product they had come out with.
“The hype matches with the promise made by the product and what is supposed to be serving in terms of consumer needs. The design of it is excellent and I would want to own a car, which looks so smart and sexy,” said Gianetti.
The critique is that the Nano and the new cars are imposing a huge social curb on society. The society is subsidising the car. The society is already paying for the cost so is another car not going to add to the coat of the car owner?
Agreeing that the question asked was a valid one Gianetti however, said that the manufacturer was to be posed with the question or the government was to be asked the same question.
“I think that it goes beyond a car and it is a much larger issue. We are facing that at every level of our interaction in the social world in India today. Since incomes are rising there is clearly a demand on the kinds of products and services each consumer wants for himself or herself,” said Gianetti.
Sunita Narain did acknowledge the fact that consumers couldn’t be stopped, but according to her, one couldn’t have “cheap and dirty motorisation either,”
“The bigger point that we have been raising is the regulatory system and therefore my argument is not really with Mr Tata or with any other car manufacturer. My argument singularly is with the government. I think that the government has completely compromised with the regulations that should govern the car industry and have compromised them to such an extent that today it is creating trouble for the public,” said Narain.


This post first appeared on World Amazing Pictures Today;Amazing News,Amazing Facts,Amazing Information,fictions, please read the originial post: here
People also like
Why SEO Is The Next Big Thing in the Real Estate Industry
Fastest and Easiest Ways on How to Make Money Online
Best 10 Food Delivery Apps to Satisfy Your Hunger
MRS THATCHER’S DREAM
7 Reasons To Invest In a Mobile Finance App in 2022
14 Best Black Friday Deals on Refrigerators
Planning for Retirement
What Investments Are Safest in 2022?