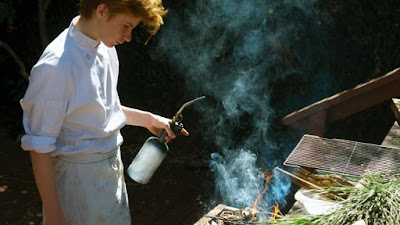 A young Cooking Prodigy tries to prove himself in the culinary world in Chef Flynn. In 2008, Flynn McGarry opened a supper club at his home at the age of only ten years old. Flynn's mother Megan is a filmmaker, who has been filming him since he was very young. As Flynn reaches his teenage years, he wishes to be taken seriously as a chef, while also tiring of the constant presence of his mother's camera.

In Chef Flynn, director Cameron Yates tracks Flynn McGarry's progress from child cooking prodigy to a teenage chef who wants to be taken seriously. The film incorporates the years of home movies footage shot my Flynn's mother Meg, whose constant filming eventually becomes an annoyance to Flynn. Flynn's biggest culinary challenge comes when he attempts to open a pop-up restaurant in New York.

One of the issues tackled in Chef Flynn is the very definition of what it means to be called a chef. Because of his young age, Flynn McGarry receives much online criticism, which states that you have to earn the title through years of training and work. However, it is apparent throughout the film that Flynn has some real culinary talent and eventually the film evolves from being about his cooking to being about the relationship Flynn has with his mother. Overall, Chef Flynn is an interesting biography of a teenage cooking prodigy, who would rather you just call him chef.