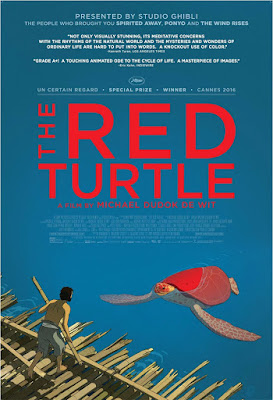 A shipwrecked man develops an unlikely relationship with a giant sea turtle in The Red Turtle. After a shipwreck, a man washes up on an island, occupied only by seals, crabs, and turtles. The man gathers wood to build a raft, but every time he tries to leave the island, the raft is destroyed by something under the water. The man soon discovers that the rafts are being destroyed by a giant red sea turtle. When the turtle emerges onto the beach, it marks the beginning of a new chapter of this man's life.

In their first international co-production, Studio Ghibli presents this film from Oscar-winning Dutch animator Michaël Dudok De Wit (Father & Daughter). Told entirely without dialogue, The Red Turtle follows a castaway's adventures on a deserted island, which includes his encounters with the titular red turtle. The story of the film take an interesting turn in the second half, which I don't really want to discuss, even though this development firmly places The Red Turtle into the realm of fantasy.

Simply put, The Red Turtle is a beautiful cinematic experience and is a film that you can just escape into. Despite the lack of dialogue, The Red Turtle tells a story that is quite easy to follow, with the film featuring a mix of realism and fantasy, including a hallucination of a string quartet on the beach. There is even some visual comedy in the film through a group of curious crabs, who are always seen scurrying around on the beach of the island.

Even though this is Studio Ghibli's first film made outside of Japan, The Red Turtle still features the same level of quality animation you would expect from the studio. In many ways, the animation style of The Red Turtle bears some visual similarities to Hergé's Tintin, particularly in the use of dots for eyes.

Altogether, The Red Turtle is an animated experience that is best seen in a cinema. With its melancholy score and fantastical visuals, this film is really a treat for the eyes. While I don't want Studio Ghibli to stop making their in-house films, The Red Turtle is a fine addition to their animation repertoire.