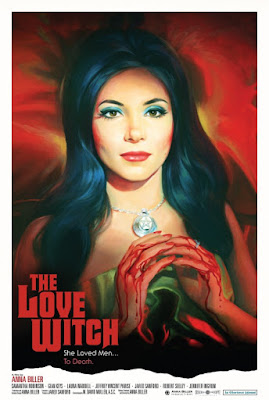 A witch seeks the love of the perfect man in The Love Witch. Elaine (Samantha Robinson) is a beautiful witch, who is starting a new life for herself in a small town. Renting an apartment in a Victorian house from fellow witch Barbara (Jennifer Ingrum), Elaine is desperate to find the perfect man for herself, using various love spells on the potential mates she encounters. However, when her potential suitors begin dropping dead, she begins to be investigated by police sergeant Griff Meadows (Gian Keys), who might turn out to be the perfect man for Elaine.

The Love Witch is an erotic thriller that is a throwback to similar films made in the 1960s and 1970s. Shot on 35mm with vintage lenses, the film has a visual aesthetic akin to the Technicolor process. The film has a relatively simple narrative about the witch Elaine, who uses spells to seduce the men in her life. However, the love that these men begin to feel ends up being too much to handle and they end up being literally loved to death. This ends up being only a minor inconvenience for Elaine, who is certain that she will find that right man for her.

With Elaine using her sexuality to have power over men, the film plays up to the typical objectification of women seen in these types of films, while also having somewhat of a feminist message. The Love Witch is definitely a film about women not being ashamed of their sexuality and the power that it can have over men. In fact, it can be argued that despite the film's sexual content, it is not really meant to titillate the viewer, with the film featuring minimal nudity that is suggested, rather than shown. It is definitely a refreshing change for a modern film to be full of strong female characters, with the male characters being the ones who are objectified.

Director Anna Biller does a good job in recreating a 1960s aesthetic for The Love Witch, to the point that it is impossible to tell that this is a modern film. While it would probably fair to criticize the style of the film as being a bit gimmicky, it does help to make The Love Witch stand out as one one of the more unique independent horror films to be released in quite a while.

Altogether, The Love Witch is a quite compelling Technicolor throwback that should be enjoyed by those who enjoy retro-style horror films.