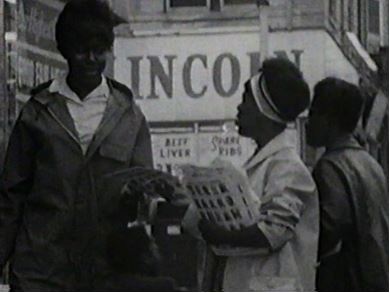 (NYU)
Students from the Tisch Moving Image Archiving and Preservation Program will restore Ivan Dryer’s "Laserimage" (1972) and Fruchter and Machover's documentary "Troublemakers" (1966), thanks to a recent grant from the National Film Preservation Foundation.

The National Film Preservation Foundation (NFPF) has awarded two grants developed by students of NYU's Moving Image Archiving and Preservation (MIAP) Program and two partner organizations. The grants were done with the guidance of Bill Brand, MIAP adjunct professor and co-founder of BB Optics Inc. a media preservation and post-production company.
Brand and MIAP students will partner with The Exploratorium of San Francisco to preserve Ivan Dryer’s Laserimage (1972), a celluloid forerunner of the laser light shows he pioneered. They will also team with media arts organization The Flaherty to preserve Troublemakers, a 1966 documentary by Norman Fruchter and Robert Machover about community organizing in Newark, New Jersey. Funding from NFPF will allow Brand and his students to save both works in his film preservation course, part of MIAP’s masters degree curriculum.

Recent MIAP alumni contributed to the successful grants. Melanie Miller (MIAP '17) drafted the proposal for Laserimage, while 2016 graduates Caroline Gil, Jonathan Farbowitz, and Laurie Duke collaborated on the one for Troublemakers, which was further adapted by Gil and Caroline Roll (MIAP '17). This model was set by 2016 graduate Eddy Colloton. While a student he wrote a successful NFPF proposal for The Film-Makers' Cooperative to preserve Dialogue with Ché (1968) by José Rodriguez-Soltero; this year’s MIAP students in turn did hands-on work in the BB Optics lab.