Kaalakaandi: Teaser poster of Saif Ali Khan-starrer has quirkiness written all over it 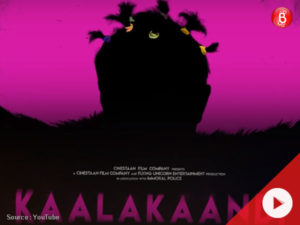 Saif Ali Khan will next be seen in ‘Kaalakaandi’. The movie was slated to release this year, but due to some issues with CBFC the film was postponed. Well, the new release date is not yet announced. But, the makers have now released a teaser motion poster of the film. The Teaser Poster is quite quirky same like the movie’s title. The trailer of the film will be out tomorrow and we simply can’t wait to watch it. (Also Watch: Saif Ali Khan spotted with his new jeep grand cherokee SRT)

The post Kaalakaandi: Teaser poster of Saif Ali Khan-starrer has quirkiness written all over it appeared first on Bollywood Bubble.

Kaalakaandi: Teaser poster of Saif Ali Khan-starrer has quirkiness written all over it