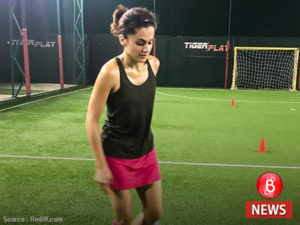 After performing various kind of roles and continuing to surprise the audience with each one of them, actress Taapsee Pannu is all set to add a new feather to her cap. This time by entering the hockey ground in her upcoming film ‘Soorma’. Many would be aware that ‘Soorma’ is a biopic project on Hockey champion Sandeep Singh which stars actor Diljit Dosanjh playing the titular role. Taapsee is currently busy shooting for this film in which she plays a hockey player. And as the shooting is in progress, the actress has shared a latest picture revealing her athlete look from the film. The actress is seen sporting a jersey with her on-screen name Harpreet written on it.

The actress took to her Twitter handle to share this picture which sees her standing on a hockey ground, captioning it, “Only if I wasn’t an actor……. ��  #Soorma #LoveForSports #IndianJersey.” (Also Check: #OOTD: Ditch your LBD, as Taapsee Pannu gives you a reason to switch!)

Have a look at Taapsee Pannu’s picture from the sets of ‘Soorma’ below:

Though her actual look in the film is still kept under wrap, this latest still is bound to turn you curious. Don’t you agree with us?

Talking about the athlete Sandeep Singh, the Hockey champion was seriously injured after being hit by an accidental gunshot in Shatabadi train, while on his way to join the national team. He was almost paralysed and on wheel chair for two years of his life. But, Singh not only recovered from that serious injury, but also established himself again in the team.

Directed by Shaad Ali, the film is produced by Sony Pictures, Chitrangda Singh and Deepak Singh.