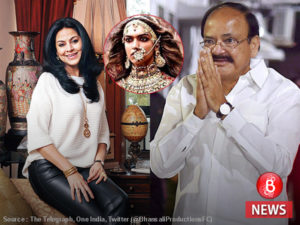 ‘Padmavati’ protests have evolved from a bushfire to a wildfire. The controversy had started over a rumoured scene between Khilji (Ranveer Singh) and Padmavati (Deepika Padukone) (which the makers clarified doesn’t exist in the movie), went to another level as the protests became violent to extent of beating Bhansali up, and issuing bounty on his and Deepika Padukone’s head. But it became bloody affair when yesterday a body was found with a threatening message, pertaining to the controversy. From royals to the Rajput Karni Sena and other fringe groups, all are creating a hullabaloo over this Movie, the release date of which has been deferred indefinitely. Many of the states have even banned the movie, before the CBFC certification, to avoid hassles and maintain law and order. Hence, it comes as a relief, when a royal has come out in its support. Not just this, even M. Venkaiah Naidu, the Vice President, has condemned the current protests that are going on against the movie.

“India always believed in pluralistic traditions and ethos and never allowed narrow and bigoted views or practices to rear their ugly heads. That is the bottom line and any attempt to undermine integrity and unity of India by forces inimical to growth of India must be nipped in the bud,” he added.

This should come as a relief for the makers. Not only the VP, but a Rajput royal from Badnore, Kanwarani Archana Singh has also come out in support of the movie, calling the protests overhyped. She has said that the ones issuing threats are intolerant and any reaction should come after watching the movie, not before that. (Also Read: Padmavati: WB CM Mamata Banerjee ready to make special arrangements for the film

“I think ‘Padmavati’ has been convoluted completely. I know a boy who worked very close with Bhansali in the production of the film and he said that there is not a (single) shot that you can fault with, and he is a Rajput himself. He also said that after seeing the film, the Rajputs would hug him (Bhansali),” Archana told the agency.

On being asked about the agitation of the Rajputs over the movie, she added, “It’s ridiculous. I am a Rajput, but so many Rajputs have come out in favour of the violence that is happening. It’s not correct. See the film and then decide. People don’t even want to see the film. “We have to stop this nonsense. Be tolerant, see it, believe it and then act but don’t react. You tend to react all the time. We have become intolerant completely.”

Let’s wait for more updates on this.

This post first appeared on Bollywood Latest News, Gossips, Photos, Songs And, please read the originial post: here
People also like
Easy Pet Rocks Craft Idea For Kids
The Potential of Smart Contracts in Healthcare
Booty Bay Slot from Push Gaming
Sony To Announce New PS Plus Video Pass Service – Free Movies and TV Shows For PS Plus Members
A Furry’s Guide to Cryptocurrency
Paul Oz Takes Oil Painting Into the 21st Century
“The Friend Who May Not Seem a Friend” – The Cat and the Fire, Post 2 of 3
6 Interesting Places To Hold Your Next Corporate Function
What Causes Bed Bugs?
Self Motivation: How to Keep Moving Forward In Your Career or Business
Capture Attention and Drive Traffic with Catchy Headlines: 7 Ideas for Blog Titles