My Review Of "The Grand Son" 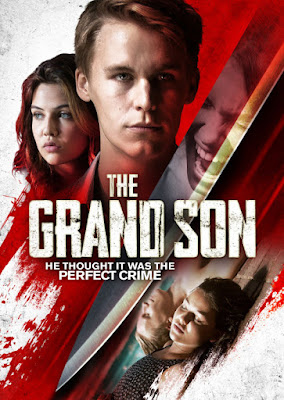 High in the Hollywood Hills, Tod and his sister, Lani live a charmed life in mansion of their grandmother, a former movie star now hosting a home shopping show with failing ratings. She sees her grandchildren as spoiled and entitled and when Tod senses that his lifestyle is in jeopardy he hatches a diabolical plot to keep the home shopping show going and the money rolling in.

"The Grand  Son" has a very nouveau riche decadence, "after the light begins to die" feeling that is as captivating as it is addictive to watch. The story is well written, filled with tortured souls, devoid of empathy, and stained Americana. The characters are 'Fargo-esque, in their "not quite right behind the eyes" personas , and social impropriety. Almost avant garde.

The acting is top notch with a great cast of talent. Rhys is perfectly suited as the male lead , with equal props going to all the cast. I wish Danielle Campbell would have had a stronger presence, but other than that everything about the acting was great.

The cinematography style and choices taken, frame this modern Gothic tale strikingly. As if channeling Ryan Murphy will doing a tribute film to "Cruel Intentions". It is a slow burn drama with psychological edges. The only downside was the low tone and casual pace didn't really allow for any suspense. So the thrill is limited to the drama and downward spiral of Wakefield's character as the situation spins out of control. Still "The Grand Son" is well worth the watch- just not for the guts and gory crowd. (4/5)

My Review Of "The Grand Son"