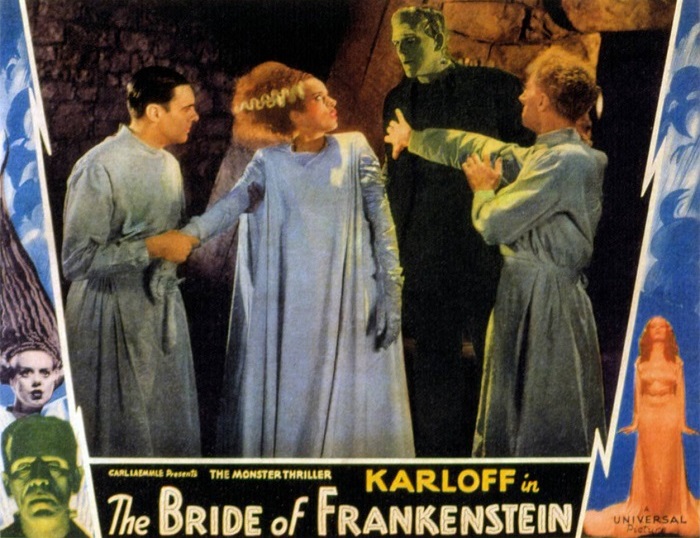 As we enter the spooky month of October, it seems there are more things to be afraid of this year than ever before! An ongoing global pandemic, an openly hostile presidential election and an unexpected opening on the Supreme Court are scary stuff indeed. Horror movies are traditionally popular in preparation for Halloween but I thought it might be more comforting, as well as more interesting, to look to the past than the present.

Monsters, ghosts and ghouls have consistently haunted movie screens since the very beginning of the film industry. One of the first was a 1910 adaptation of Frankenstein produced by inventor Thomas Edison. The Golem, The Cabinet of Dr. Caligari and Nosferatu soon followed. This last film, as well as an early version of Dr. Jekyll and Mr. Hyde titled The Head of Janus, were directed by German expressionist F.W. Murnau, who was openly gay.

In fact, there were many gay men, lesbian women and other queer artists both behind and in front of the camera for these early horror offerings. They can be considered queer in several different ways, according to Harry M. Benshoff in his book Monsters in the Closet: Homosexuality and the Horror Film. He wrote: "By 'queer,' I mean to use the word both in its everyday connotations ('questionable... suspicious... strange...') and also as how it has been theorized in recent years within academia and social politics... (it) is what opposes the binary definitions and proscriptions of a patriarchal heterosexism."

Benshoff goes on to define four ways in which a horror movie can be considered LGBTQ:

Here is a rundown of some of the most significant queer horror movies produced between 1930 and 1965:

Frankenstein (1931), The Old Dark House (1932) and Bride of Frankenstein (1935):
This early trifecta of scares (though not without some welcome, knowing laughs) were all directed by the great James Whale. In 1998, Whale became the subject of gay director Bill Condon's film Gods and Monsters, which explores Whale's homosexuality in explicit detail. The handsome but closeted gay actor Colin Clive plays Dr. Frankenstein in both the original film and its sequel, and the character's relationships with his henchman Igor as well as fellow mad scientist Dr. Pretorius (wonderfully played by the bisexual Ernest Thesiger) definitely have homoerotic and/or campy shadings.

The Black Cat (1934):
Horror greats Boris Karloff and Bela Lugosi co-star (for their first of eight films together) as frenemies who delight in torturing each other, both psychologically and physically. As Benshoff notes in his book, they are essentially "a sadomasochistic queer couple who dabble in all sorts of queer romance: Satanism, incest, necrophilia and bestiality." They do so in a spectacularly strange, expressionist house. The film has been assessed more recently as prefiguring the decadence and depravity of Nazi Germany.

Dracula's Daughter (1936):
The stunningly beautiful Gloria Holden thrills and chills in the title role of this lesbian-leaning sequel to 1931's Dracula. Unlike most vampires, she wants to be cured of her blood-sucking condition and become "free to live as a woman." As her high-society alter ego, Hungarian Countess Zaleska, she seduces women as well as men. She also has a bitch-queen manservant who frequently comments with disdain on their shared plight as representatives of a minority.

Cat People (1942):
This may be my fave of the oldies, and I love its more graphically kinky 1982 remake even more. A mysterious woman, Irena (Simone Simon), with a history of difficulty with men (ahem) learns she is the descendant of a mystical race of humans who turn into panthers when they become sexually aroused. Will a handsome psychiatrist "cure" her of her deviant sexuality once he marries her in order to make love to her? While the subject matter is handled discreetly in the original, stylish director Val Lewton (who began his career as a pornographic novelist and was a nephew of lesbian actress Alla Nazimova) pushes things as far as probably any filmmaker could at the time.

The Picture of Dorian Gray (1945):
The Catholic-run Hollywood Production Code of the time tried to stamp out all LGBTQ references in studio films. Nevertheless, this adaptation of Oscar Wilde's queer novel about a man whose portrait ages instead of him is the most overtly gay movie of the era. Hurd Hatfield, who was never romantically linked to women and never married, stars as Dorian, with the caustic yet debonair George Sanders co-starring as Lord Henry. They essentially play a foppish gay couple doomed by one partner's narcissism. Sound familiar?

I Was a Teenage Werewolf (1957), I Was a Teenage Frankenstein (1958) and I Married a Monster from Outer Space (1958):
Hunky young Michael Landon and Gary Conway, respectively, are both exploited by queer mad scientists in the first two films, which were big hits with the 1950's drive-in crowd. In the third, an unsuspecting young woman becomes betrothed to an alien (handsome Tom Tryon) who seeks out male members of his kind in public parks by night (double ahem). These movies are more comedic than scary by today's standards but still offer queer food for thought.

The Haunting (1963):
Adapted from queer author Shirley Jackson's The Haunting of Hill House, this was one of the scariest movies I watched as a kid and it remains effective today. Among the investigators of a ghost-infested estate is a seemingly-fearless lesbian, Theodora (played by Claire Bloom). Her sexual orientation isn't specified in the film but it doesn't have to be. A 1999 big-screen remake starring Catherine Zeta-Jones as Theodora as well as 2018's The Haunting of Hill House on Netflix have presented the character as out and proud, but they don't top the original movie when it comes to inducing goosebumps.

How many of these have you seen? This month provides a great opportunity to check them all out, especially in the absence of Halloween parties. These classic scary flicks might just provide a welcome distraction from real-life frights!