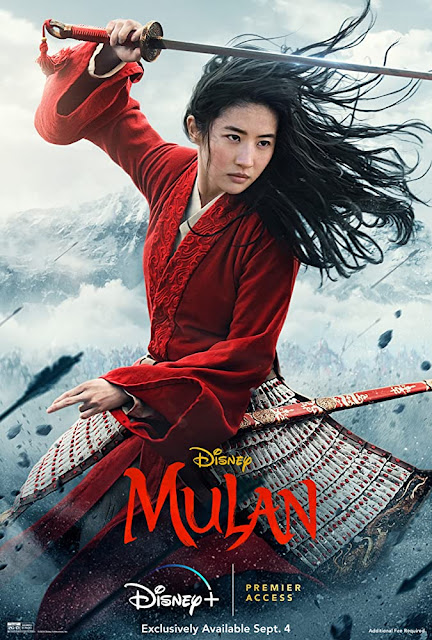 Even fans of Disney's 1998 animated favorite Mulan will admit that it is not perfect; it forgets it's a musical about halfway through and that ending is embarrassing. But the good parts – its equally big doses of humor, heart and '90s "girl power" energy – outweigh its short-comings. Sadly, the new live action version of Mulan (now streaming – for an additional fee – on Disney+) chose to ditch most of what made the original so charming and entertaining; no man-making musical numbers or wisecracking dragon sidekicks here. Instead what we get is a stunning-looking but shallow adventure that fatally strips our beloved heroine of what made her so inspiring in the original.

Mulan then was a normal young woman who bravely takes her elderly father's place in the Emperor's Army and, through raw determination and enduring honor, goes and saves all of China. Mulan now is some kind of budding Jedi, able to tap into her qi and perform amazing feats of agility with Crouching Tiger-esque ease. Not exactly relatable (and bizarrely reminiscent of what the recent biopic Harriet did with its titular legend); the bland lead performance by Yifei Liu doesn't help much either. And to further "The Force" of it all is a screwy subplot involving a shape-shifting witch (Gong Li, wasted) who tries to lure Mulan to the "Dark Side". They traded Mushu for this?

Disney obviously spent a lot on this Mulan, and the money was well spent in regards to its technical and design aspects, which don't suffer much from home viewing. But you needn't spend extra to watch it now, just wait till December when it will be available to all Disney+ subscribers, and just stream the superior original instead.