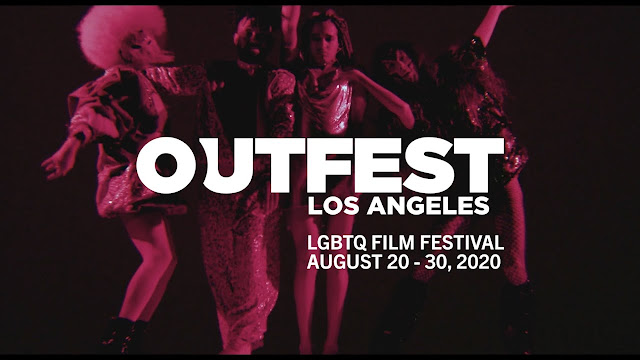 There are hybrid plants, hybrid animals, even hybrid cars. But a hybrid LGBTQ Film festival? That's how Outfest Los Angeles is billing itself this year in light of our present, socially-distanced circumstances. LA's largest and oldest film fest, also considered the preeminent LGBTQ fest in the world, is scheduled to take place August 20th-30th.

Presented by Warner Media, Outfest 2020 will feature ten days of LGBTQ movies, panel discussions with filmmakers and celebrities, and numerous special events. It will take advantage of the latest "hybrid" opportunities in streaming/digital, at-home, and in-person (as allowed) events that will make the fest accessible to a global audience for the first time in its history. Each previous summer, Outfest has screened more than 200 feature and short films from around the world to an audience of more than 50,000 people in venues throughout Los Angeles. This year's program is being promoted as "Out Where You Are" in recognition of the current difficulty of having so many people gather together in person.

"The Outfest Los Angeles LGBTQ Film Festival was born out of an era of advocacy, understanding that the only way we would ever see ourselves reflected three-dimensionally in entertainment was if we found a way for storytellers to find visibility," according to organizers. "As the channels, audiences, and the marginalization and acceptance of our community shifts, so shall we." 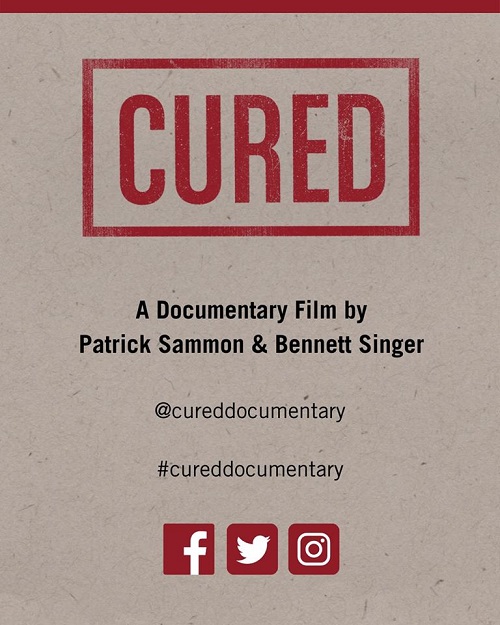 Readers can visit the Outfest website for up-to-date information, as well as to purchase a full-festival online viewing pass at the low price of $59. Each film or program will be available to watch for 72 hours after its premiere. I was able to preview several features to be screened including Cured, which will be making its world premiere on August 24th. This eye-opening documentary is directed by Bennett Singer (Brother Outsider: The Life of Bayard Rustin) and Patrick Sammon (Codebreaker), and was co-produced by Outfest's former Executive Director, Christopher Racster. It illuminates a pivotal yet largely unknown chapter in the struggle for LGBTQ equality: the years-long campaign that led the American Psychiatric Association (APA) to finally remove homosexuality from its list of mental illnesses in 1973.

Homosexuality was listed in the APA's first edition of "Diagnostic and Statistical Manual of Mental Disorders" (DSMR) in 1952, based on limited studies of people institutionalized in prisons and psychiatric hospitals. This was subsequently used to enforce laws against LGBTQ relations, and generations of US school children were taught that being LGBTQ was "a sickness." Most psychiatrists turned a blind eye to important studies by Sigmund Freud and Alfred Kinsey arguing that homosexuality was not a mental illness.

As depicted in Cured via vintage film footage as well as more recent interviews with participants and witnesses, several pioneers in the gay rights movement saw it essential to take on the APA. This was especially true in the wake of the Stonewall riots. As lesbian activist Barbara Gittings recognized, "Nothing would ever change as long as we were burdened with the 'sickness' label." Gittings was joined by Mattachine Society head Frank Kameny, GLAAD co-founder Ron Gold and others in storming the APA's annual meetings and demanding dialogue on the subject of homosexuality.

Despite the vociferous opposition of Dr. Charles Socarides, who remained anti-gay even after his own son came out to him, this dialogue led within a few years to the repeal of homosexuality from the DSMR. Ironically, Cured reveals that the current head of the APA, Dr. Saul Levin, is openly gay. The documentary serves as a strong, timely testament to the power of persistence and righteous anger to effect change. 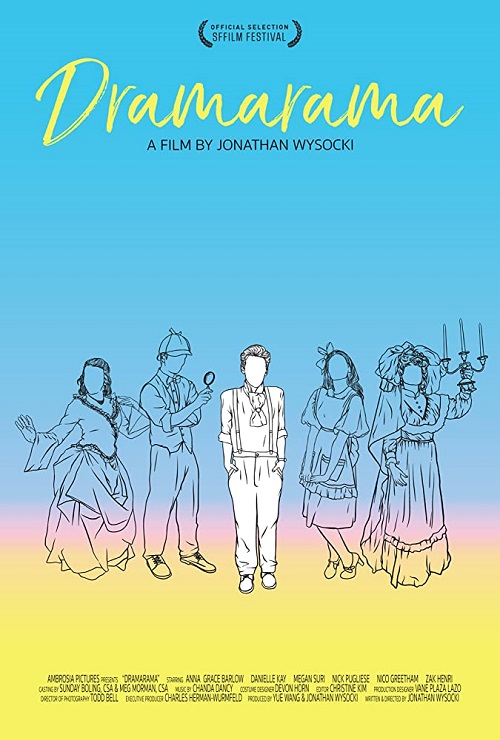 A delightfully different, narrative movie that will also be an official selection at the fest is Dramarama. This semi-autobiographical dramedy by Jonathan Wysocki is set in Escondido at the end of summer, 1994. Five longtime friends and recent high school grads gather for an overnight Victorian murder-mystery party before heading their separate ways to college. The fact that all of them were involved in theatre together adds a hilariously over-the-top element to the proceedings.

Among this group of three girls and two boys is the closeted Gene, who is questioning not only his sexuality but his faith. He is attracted to his best friend, Oscar, as well as a local pizza delivery guy. Tensions, sexual and otherwise, bubble up throughout the friends' final night together. Dramarama is well worth seeing for Wysocki's smart script, abundant references to early-90's pop culture, a fun Danny Elfman-esque music score by Chanda Dancy, and the terrific performances given by its talented, fresh-faced cast. 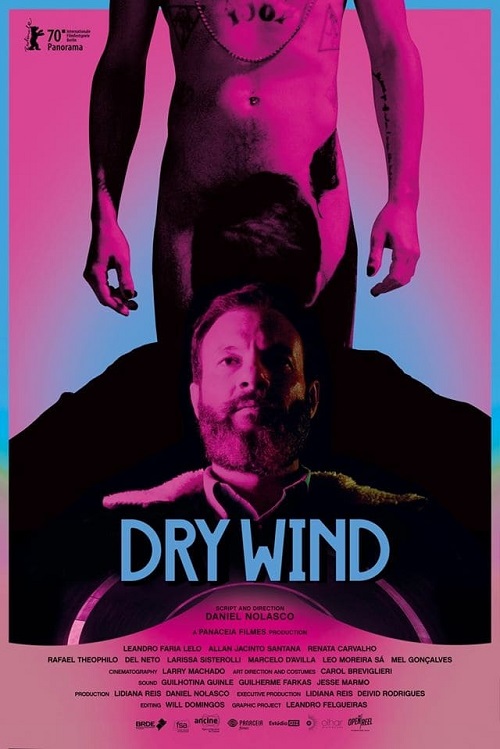 Two other noteworthy films that will be screened during Outfest are Dry Wind and No Hard Feelings. "Hybrid" is a good term to describe the storytelling and/or characters in these features. Dry Wind incorporates hardcore pornography in its narrative at times, while the lead character in No Hard Feelings is often conflicted between his Iranian ethnicity but German citizenship.

Dry Wind, from Brazil, weaves a sensual tale from its Speedo-filled opening minutes to a climactic three-way. Sandro (a bold performance by Leandro Faria Lelo) is a middle-aged gay man drawn to two younger co-workers at the fertilizer plant where he works. He is also drawn to numerous fetishes including leather, motorcycles, piercings, sportswear and tattoos. Talented writer-director Daniel Nolasco references both Tom of Finland and Alfred Hitchcock in this vibrant, voyeuristic drama that features abundant full-frontal nudity and explicit gay sex. 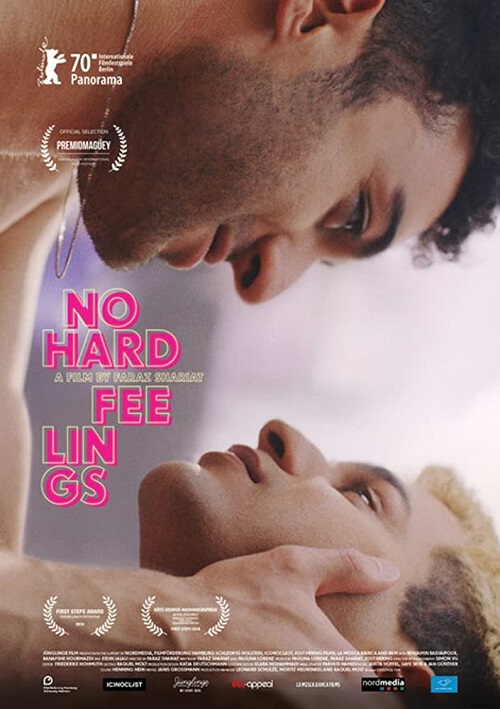 No Hard Feelings focuses on Parvis (played by the charismatic Benny Radjaipour), a young gay man born to Iranian refugees in Hanover, Germany. After getting in some legal trouble, Parvis is assigned to complete community service hours at a local center for migrants. There he meets handsome, closeted Amon and his sister, who are both from Iran. Parvis and Amon slowly grow close to each other and embark on a genuinely sexy, ultimately tender relationship despite the threat of deportation that hangs over Amon and his sister. Faraz Shariat's admirably complex film is also a colorful, music-filled celebration of Iranian culture.

There will be many more can't-miss LGBTQ films shown during Outfest 2020, so be sure to participate from wherever you are! 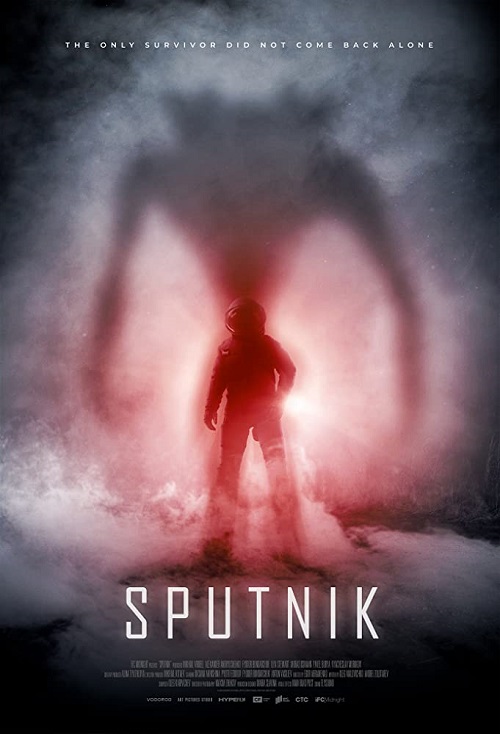 If you're in the mood for some non-LGBTQ but creepy and thought-provoking sci-fi, Sputnik is newly available on demand from IFC Midnight. This Russian riff on Alien and its cinematic ilk is set in 1983 Kazakhstan while the Cold War between the USSR and US was still raging. After something goes wrong during their flight, a space capsule returns to Earth with only one survivor: the handsome commanding officer, Konstantin (Pyotr Fyodorov). Unfortunately, Konstantin claims to have amnesia and can't remember what happened.

Dr. Tatiana Klimova, a disgraced but perceptive psychiatrist well-played by Oksana Akinshina, is brought in to assess the survivor. She diagnosis Konstantin with PTSD but also discovers he has been infected by an alien parasite or symbiote that emerges from his body at night. It falls to Tatiana and the increasingly aware Konstantin to outwit their military captors, who naturally want to weaponize the creature.

Sputnik's director, Egor Abramenko, imbues the film with both a heart and conscience in addition to its accurate evocation of Soviet-era politics, science and military. While it is a creature feature on the surface, Sputnik serves as a potent allegory for the experience of being abandoned and/or adopted. It also offers a memorable twist on what might constitute a body-invading alien's main diet. The movie is gory in spots, which will please some horror/sci-fi fans, but there's more going on here. 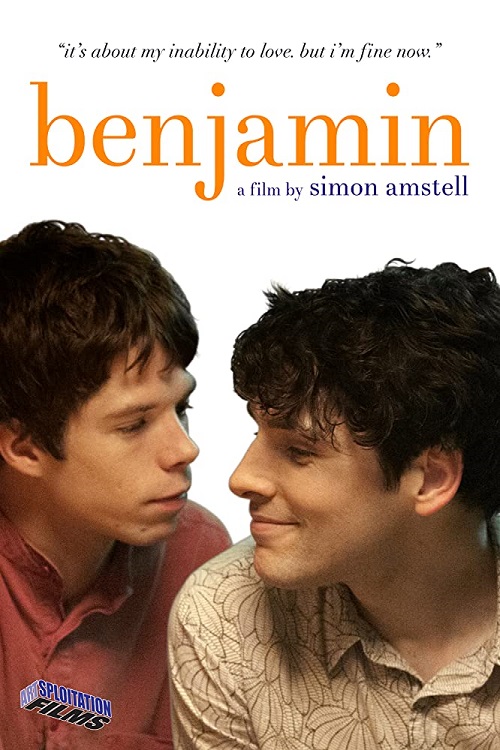 Returning to new gay-themed films brings me to Simon Amstell's Benjamin, which will be released August 25th on DVD and VOD by Artsploitation Films. The title character, known as "Benji" to his limited friends, is a British filmmaker with a philosophical bent. He is also gay, depressed, insecure and romantically drawn to "thin boys on stage."

It is this latter trait that initially connects Benjamin and Noah, a young French singer he meets at a party. Soon after, though, Benji is confronted with the flop of his latest movie as well as his seductive (and very attractive) co-star, Harry. Will he finally grow up and become "a real boy" not unlike Pinocchio, or will Benjamin succumb to his insecurities?

Some of these plot points have been previously covered in other, better gay films but Benjamin benefits from a self-effacing sense of humor as well as good performances. Colin Morgan, perhaps best known as star of the 2008-2012 TV series Merlin, is plenty likable and at times deeply touching in Benjamin's title role. Amstell's screenplay also provides some reflective commentary on personhood and the self. Streaming the film is nothing to feel insecure about.

Reverend's Ratings:
Cured: A-
Dramarama: B+
Dry Wind: B
No Hard Feelings: B+
Sputnik: B
Benjamin: B-