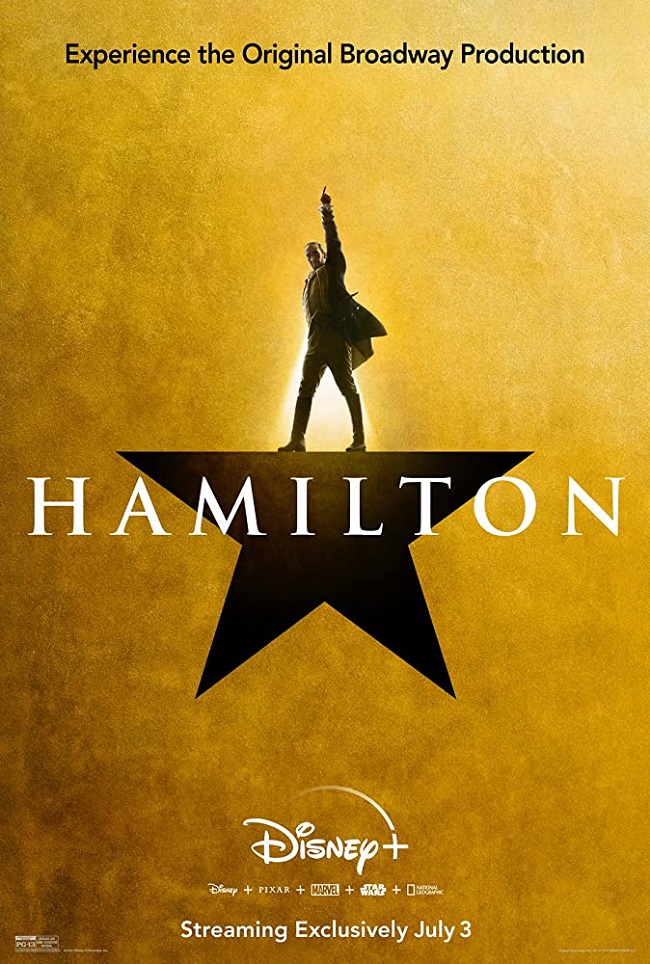 2020 is half over and I'm not sure whether to say "oh my God" or "thank you God"! It was already a dreadful year for me personally even before the COVID-19 pandemic due to my mother's death in early January and the fallout from that. So, as Auntie Mame famously declared at the height of the Great Depression: "We need a little Christmas now!" Yes, five months early.

Filmmakers and streamers have been happy to oblige. First and foremost, Disney+ moved up its anticipated premiere of Hamilton, the filmed version of Broadway's smash musical, by more than a year and just in time for Independence Day. It doesn't contain any Yuletide elements but its premature availability is itself a great holiday gift. I was unsuccessful at seeing it on stage so I'm thrilled to have finally watched this truly fantastic edition (being referred to by fans as "Hamilfilm") culled from three performances in 2016 and starring the original New York cast including Lin-Manuel Miranda, the show's deservedly acclaimed creator.


Unless one has spent the last five years living under a rock, you should be aware that Hamilton tells the story of founding father Alexander Hamilton through a multi-ethnic cast and decidedly modern musical approach. It won multiple 2016 Tony Awards including Best Musical as well as the Pulitzer Prize for Drama. Brilliantly adapted by Miranda from Ron Chernow's straightforward biographical book, it is compelling theatre imaginatively directed by Tony winner Thomas Kail. While I'm not as enthusiastic about Andy Blankenbuehler's choreography, which is hip hop-inspired but often strikes me as herky-jerky in all his projects, it is undeniably energetic.

Kail also direct the current film effectively, but one must bear in mind that this is a high-def, edited recording of a live stage performance rather than an opened-up movie. (A true "Hamilfilm" could yet happen down the road.) As such, I wish Kail and crew would have eliminated the audience's reactions. I don't like being "cued" when to applaud, laugh, sing along, etc. while watching a movie. When one is actually sitting in a Broadway theater, a viewer is an active part of the audience and participates with them as well as the performers on stage. The same dynamic simply doesn't exist while watching a recording alone from one's sofa, and it is silly to try to re-create it at home.


That being said, Hamilton on Disney+ is chock full of incredible music, dramatic moments and great performances. The entire original Broadway cast can be enjoyed here including Tony winners Leslie Odom Jr. (Aaron Burr), Renee Elise Goldsberry (Angelica Schuyler), and Daveed Diggs (Lafayette and Thomas Jefferson). Also on display is out actor Jonathan Groff's deliciously funny appearance as King George III, who had left the production before it was filmed but was invited back for this special occasion. Since my experience of Hamilton before now was limited to the cast recording, I was unprepared for Groff's dishy, non-singing involvement in "The Reynolds Pamphlet" sequence. Simply hilarious!

The production is beautifully photographed by Declan Quinn (Leaving Las Vegas, In America) and sharply edited by Jonah Moran (Fosse/Verdon, Mars). Nowhere is their artistry more apparent than during the showstopper "The Room Where It Happens." With Broadway and many theaters around the world currently closed, the opportunity to view this Hamilton is a true gift... even if one's living room is the room where it happens. 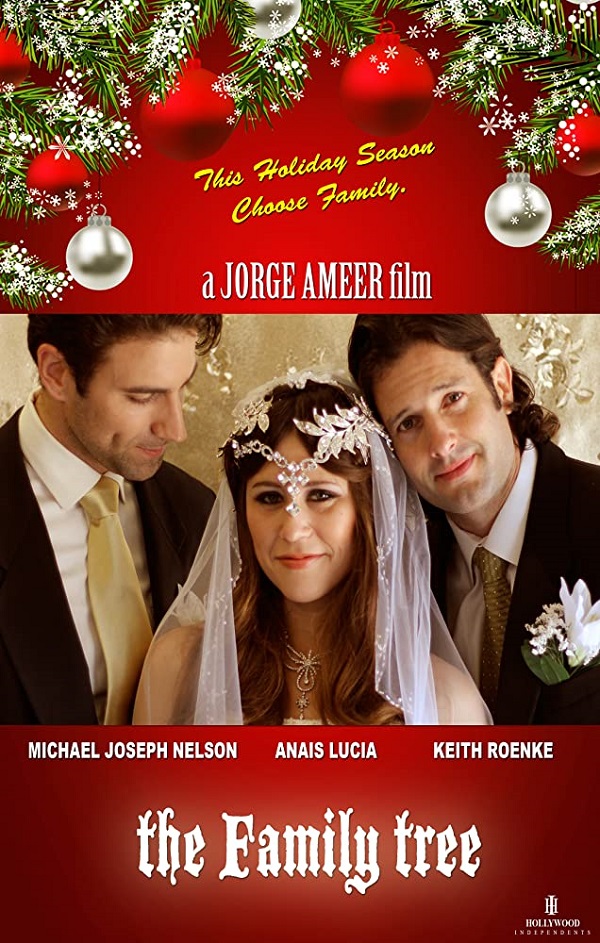 One night before Christmas, animal rescuer Victor (played with abundant compassion by Keith Roenke) stumbles across the robbed and beaten body of a man in his neighborhood. We come to learn he is Roy, an undocumented and homeless but not unattractive American played by Michael Joseph Nelson. Victor takes him in and nurses him back to health, learning Roy's story in the meantime. Although both men are straight, Victor eventually offers to marry Roy so he can stay in Panama. Roy is initially reluctant but realizes he has no other options. They get civilly married on Christmas Eve, then ironically start falling in love with each other.

The men's relationship becomes more complicated when Roy goes to work for and eventually falls in love with Victor's female bff, Alina (Anaïs Lucia). They get engaged so Roy and Victor get divorced. Soon after their marriage, however, Roy learns that he is infertile. Alina wants to have a baby, so Roy and Alina ask Victor to father their child "naturally" with Roy present to provide romantic inspiration to Victor. Tragedy strikes in time (have Kleenex handy) but the trio's love for one another lives on.

While the performances in The Family Tree are at times amateurish and Ameer's dialogue can be simplistic, this is a heartfelt story heightened by its holiday setting. The film features warm, colorful cinematography by James Brown as well as handsome lead actors and some tasteful male nudity. Editing is Ameer's weakest skill, as this movie's slow pace and running time of 130 minutes prove. Still, The Family Tree is unique, sensitive and memorable. 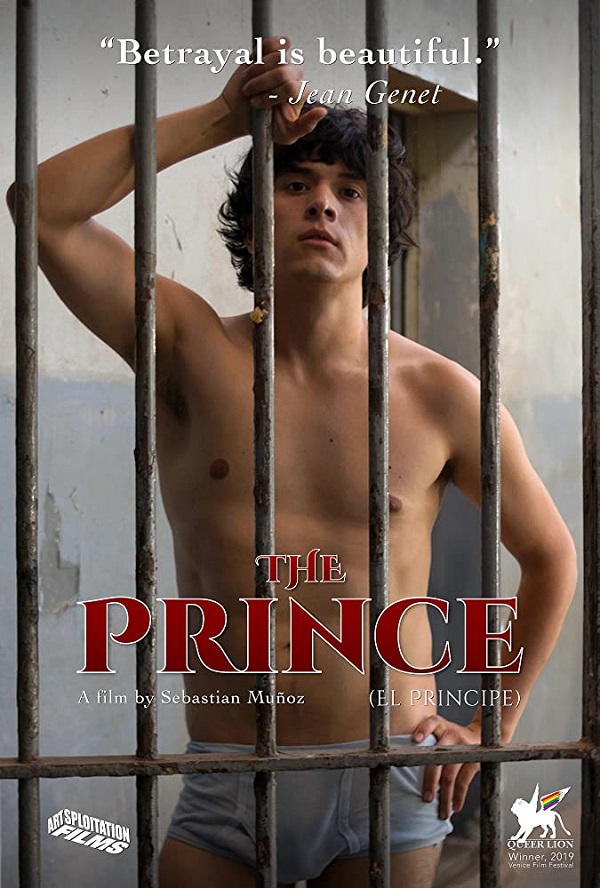 If Martin Scorsese were to direct a gay-themed prison flick, it might look something like Sebastián Muñoz's The Prince (El Principe). The movie won the prestigious Queer Lion award at last year's Venice Film Festival and is newly available on DVD, Blu-ray and streaming services courtesy of Artsploitation Films.

Set in a Chilean prison during the 1970's Allende era, The Prince echoes Jean Genet's sexually explicit short film Un Chant D'amour and Fassbinder's provocative Querelle in its exploration of male desire under oppressive conditions. Attractive, 20-year old Jaime ends up incarcerated after stabbing his friend to death while in a drunken, jealous rage. He is assigned to a cell with four other men including the domineering Ricardo, aka "The Stud" (although he is referred to as "The Stallion" in promo materials), plus a cat named Plato.

Ricardo takes Jaime under his wing and provides him protection in return for sexual services. While Jaime becomes attracted to another young, similarly kept inmate, he also falls truly in love with Ricardo. Some gentle romantic and comedic moments brighten the generally hellish environment and proceedings. The movie also provides a potent evocation of community, with its requisite tensions and intimacies, losses and celebrations.

The Prince serves as Muñoz's narrative feature directing debut after two decades working as an art director and production designer. His visual skills are impressive but so is his ability with actors. Juan Carlos Maldonado is sexy and sympathetic in the title role, while Alfredo Castro gives a nicely nuanced performance as the cat- and boy-loving "Stud." This is a great movie for gay men to watch while potentially feeling incarcerated at home. 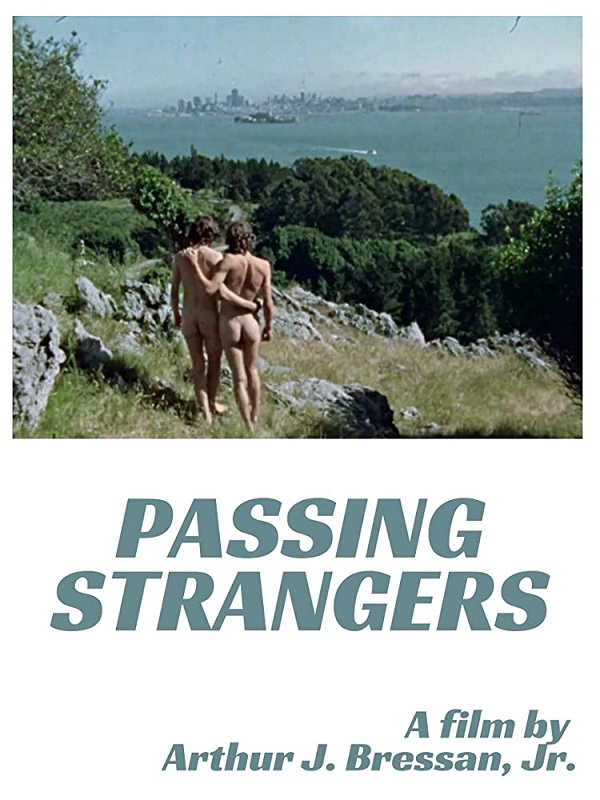 Like Un Chant D'amour, many of the movies available on Pink Label TV have historic, sociological and/or artistic significance. This is especially true of "The Bressan Project", which spotlights new 2K digital restorations of two pre-AIDS gay features by Arthur J. Bressan, Jr. The pioneering filmmaker died of AIDS complications in 1987 but not before making Buddies, the first feature film about AIDS, in 1985.

Passing Strangers (1974), available now, tells the unexpectedly romantic tale of an 18-year old man, Robert, who is struggling to come out in San Francisco. He replies to a newspaper romance ad (remember those?) from Tom, a 26-year old looking to settle down from his cruising lifestyle. They begin exchanging letters in between graphic sex scenes with other men, and eventually meet at a local gay beach. 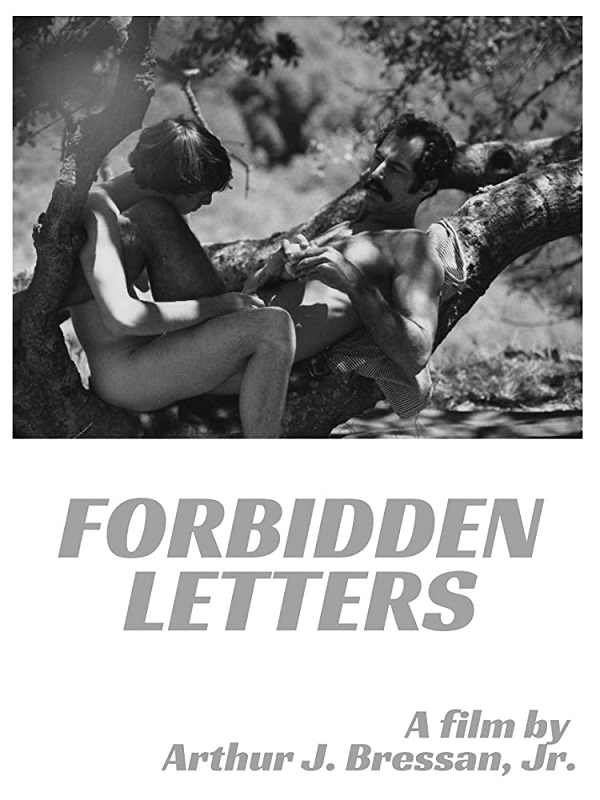 The film is initially shot in black and white but it changes to color à la The Wizard of Oz once Tom and Robert meet in person. It is badly dubbed and features some laughably dated camera shots and techniques as well as a weird music score. However, Passing Strangers was ahead of its time in its open and honest depiction of the cruising lifestyle and the desire by some gay men for a true romance. As the older, experienced Tom writes, "I want to love someone." It's simple but somewhat groundbreaking for the time. From today's perspective, the movie gives a glimpse at a time that was at once more hedonistic yet more innocent for gay men. It is also historically significant for Bressan's inclusion of footage from the very first San Francisco Gay Freedom Parade, which he shot in 1972.

Reverend's Ratings:
Hamilton: A-
The Family Tree: B
The Prince (El Principe): B+
Passing Strangers and Forbidden Letters: B