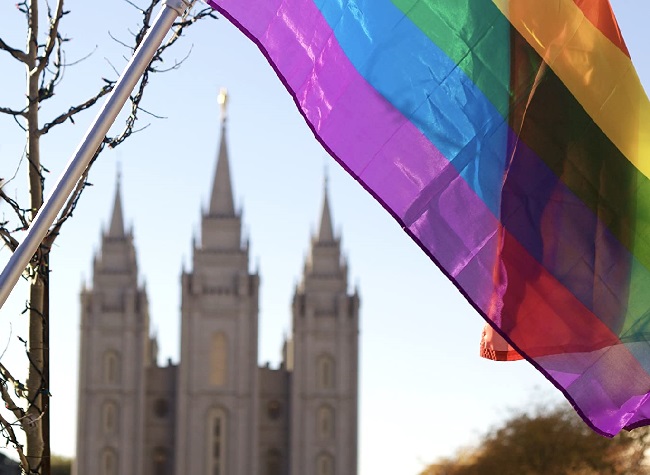 Happy socially-distanced Pride, everyone! Viruses, rioters and looters may be abundant nowadays but we in the LGBTQ community must do the best we can to celebrate. It is interesting to note that Pride month each year commemorates a riot, a street protest in June, 1969 that was sparked when bar patrons at New York City's Stonewall Inn, led by trans people of color, fought back against routine police violence. Over the next six days, the small band of patrons were joined by 1,000 protestors who clashed in the streets with police and energized the movement for LGBTQ equality.

Sadly, today also marks four years since the Pulse massacre in Orlando, Florida. We must take a moment to remember the 49 lives senselessly stolen at the popular gathering place for young LGBTQ people. Out today in virtual release via Laemmle Theaters in Los Angeles and others is a powerful new documentary, For They Know Not What They Do, that incorporates one Pulse survivor's story. The film is Daniel Karslake's sequel to his 2007 film For the Bible Tells Me So and continues the exploration of how religion has been used to oppress many LGBTQ individuals. Thankfully, it also shines a hopeful light on the growing number of conservative Christian parents who are becoming more accepting and supportive of their "sinful" children.

Karslake provides intimate, sympathetic portraits of four US families. One is an evangelical Christian married couple who struggled with both a gay brother/brother-in-law and their own gay son, the latter of whom became involved in the "ex-gay" reparative therapy movement with tragic results. Another couple confronted the difficult reality that their daughter is transgender; she is today political activist Sarah McBride. A bi-racial Christian couple similarly struggles to accept their transgender son. And then there is the Hispanic Catholic family with a gay son and grandson, Vico. His traditional, Puerto Rican grandmother was the more resistant to Vico's sexuality but she grows to a greater understanding after Vico survived the 2016 Pulse shooting. Tragically, several of his friends were killed or wounded that night. One can't not be moved by this family's story.

For They Know Not What They Do incorporates appearances by such anti-LGBTQ stalwarts as Pat Robertson, Focus on the Family, and Exodus International. But there are also powerful, unexpected statements of support for our community from some Protestant Evangelical clergy and congregations. The film is ultimately uplifting, proving that "conversion" of hearts and minds is possible for those anti-LGBTQ folks who need it most. For more information about how to watch it, visit the First Run Features website. 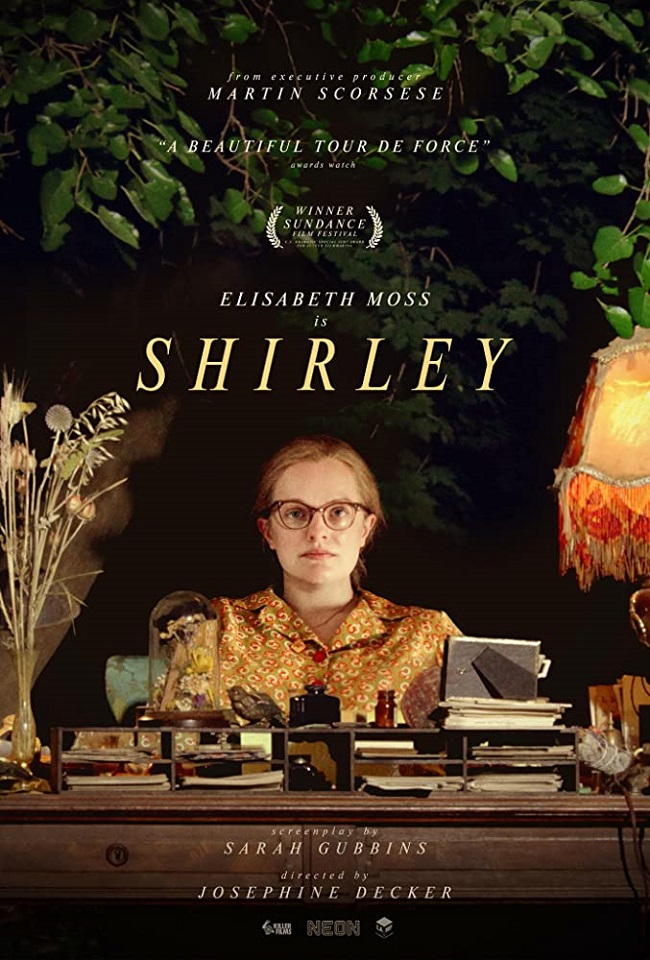 Suspense writer Shirley Jackson hasn't been widely regarded as an LGBT pioneer despite the presence of some such-oriented characters in her books, notably The Haunting of Hill House. This perception is sure to change thanks to Shirley, the new biopic/psycho-drama now available on Hulu and other streaming services. Director Josephine Decker won a Special Jury Award for Auteur Filmmaking at January's Sundance Film Festival, while Elisabeth Moss gives a spellbinding performance as the neurotic author that is already gaining her end-of-the-year awards talk.

In the film, Shirley resides with her husband Stanley (played by the reliably great Michael Stuhlbarg) on the campus of the women's college at which he teaches. She already has a successful writing career but is struggling with her new work. That is, until a young married couple arrive to temporarily live with Shirley and Stanley. Fred (handsome Logan Lerman) is Stanley's new teaching assistant, and his wife Rose (a strong turn by Odessa Young) is expecting their first child.

There are obvious shades of Who's Afraid of Virginia Woolf? as the hosts begin to play seductive mind games on their unsuspecting boarders. Interestingly, Fred and Rose increasingly become like Stanley and Shirley. The film also features lesbian interactions between Shirley and Rose as well as resonant feminist commentary. Decker makes it all Gothic and occasionally morbid à la Jackson's stories. Shirley is both insightful and creepily entertaining. 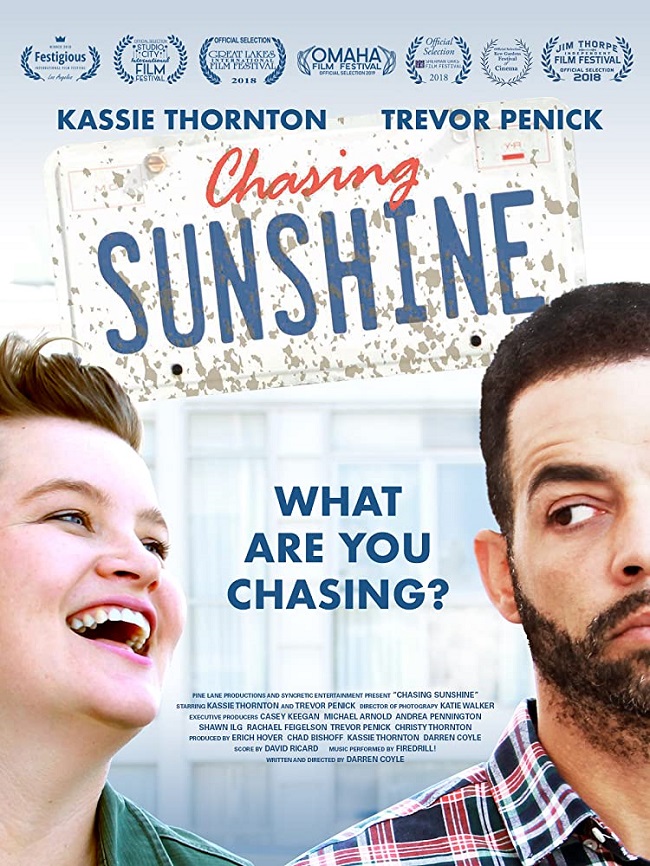 Darren Coyle's Chasing Sunshine offers a decidedly lighter take on not only lesbian relations but the state of modern love in general. Though made in 2018, it is newly available for streaming via Amazon and other sites. Set in San Fernando Valley and the greater Los Angeles area, this romantic comedy centers on struggling actress Darcy (a winning performance by out actress Kassie Thornton, who sports an "It Gets Better" t-shirt throughout).

When Darcy discovers a note she believes to be from her secret admirer slid under her door, she embarks on what becomes an increasingly wacky scavenger hunt. Being car-less, however, forces Darcy to recruit her best friend's boyfriend, Jack (Trevor Penick, very funny), as her driver. The enjoyably mismatched duo have discussions and debates as they drive to each new clue. They also pick up Jack's occasional Lyft clients, who provide some of the film's funniest moments.

Coyle has a good eye for offbeat SoCal locations as well as a good ear, as evidenced by David Ricard's jaunty, a cappella bebop score. Chasing Sunshine is at times perceptive, at times silly but a feel-good flick worth checking out during Pride month.

Last but not least among new movie offerings for Pride is Boys on Film 20: Heaven Can Wait. This latest assortment of gay-themed shorts from around the world is out now on VOD and DVD from Peccadillo Pictures. Of note, the Boys on Film collection is now at 20 years the world's longest-running short film series.

While the 11 shorts offered here are consistently good, two of them – Just Me and Mine – are decidedly downbeat. Another pair, Chromophobie and Manivald, are noteworthy for their unique animated takes on gay life. Don't Blame Jack serves as the 29-minute centerpiece of this 2 1/2-hour showcase. It is the sensitively-written and -performed story of a bipolar man failing to find stability, until he happens to meet an understanding (and sexy) new guy.

I really liked the visually-impressive Mankind, about a gay man, Will, who is accepted as a finalist for the first manned mission to Mars. It will be a one-way trip, however, which is unhappy news to Will's lover. And this collection's finale, The World in Your Window, is a touching must-see about an 8-year old boy struggling to console his father in the wake of his mother's death. He gets unanticipated help from a tough, tattooed neighbor.

Whether you'll be venturing out or staying in, there are numerous safe ways to celebrate Pride!

Reverend's Ratings:
For They Know Not What They Do: A-
Shirley: B+
Chasing Sunshine: B-
Boys on Film 20: Heaven Can Wait: B