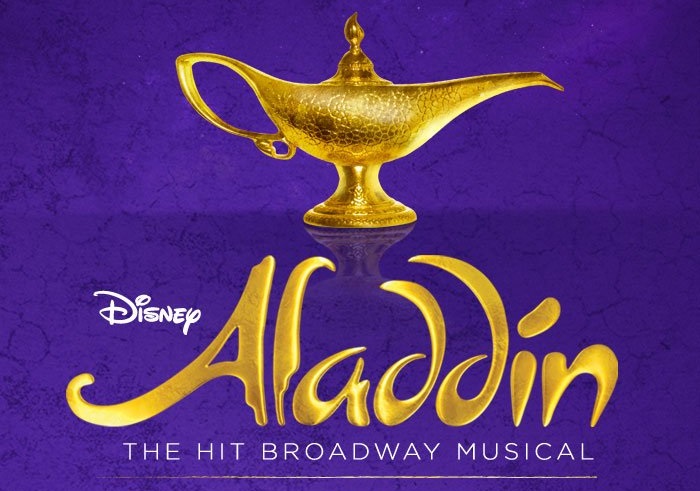 Aladdin has proven to be Disney's latest cash cow on Broadway, at least until Frozen begins previews next month. It is now making its Los Angeles premiere at the fabled Hollywood Pantages through March 31st. After attending opening night last week, I have no doubt this eager-to-please musical will likely be just as successful here.

If anything, the stage adaptation of the 1992 animated film is too eager to please. It pulls out all the stops, leaving a woman seated behind me to declare "I'm exhausted" at both intermission and curtain close. Thankfully, I don't share her sentiment. The show is frequently spectacular and largely enjoyable but is also, as my young friend Steve (who accompanied me to the opening) likes to say, "a little extra." 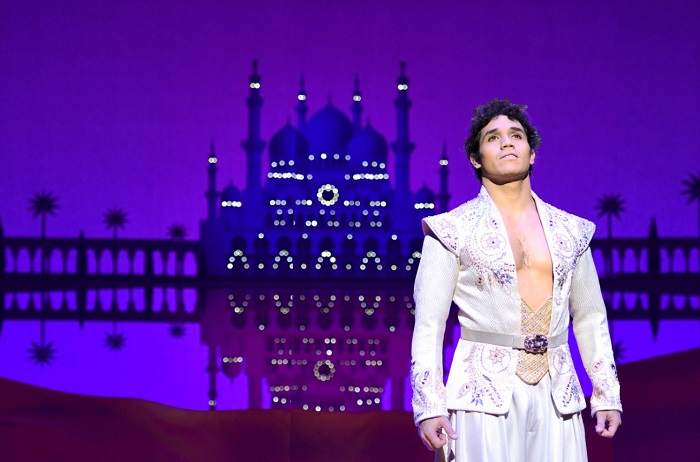 The plot, derived from the classic Arabian Nights stories, hardly needs recounting. Suffice to say the stage version retains its spirited "street rat" title character, a headstrong princess named Jasmine, and a conniving vizier named Jafar who is out to rule the kingdom if not the world. And yes, the rambunctious genie immortalized by Robin Williams' vocal talents is now flesh and blood... and African-American.

All of the Oscar-winning songs written for the film by Alan Menken, Tim Rice and the late Howard Ashman have been retained, some even expanded. A handful of new songs have been added but most are forgettable. "Proud of Your Boy," the most affecting of the new tunes, was actually written for the movie but cut. Perhaps most egregiously, Aladdin's simian pal Abu has been needlessly replaced by a hapless trio of fellow thieves.

Director-choreographer Casey Nicholaw is best known for the decidedly adult-leaning The Book of Mormon and Something Rotten! His sensibilities don't fit comfortably with the more family-friendly fair so the humor in Aladdin often feels restrained. Fortunately, Nicholaw does not restrain the visual aspects of this production. Bob Crowley's scenic design is stunning, Gregg Barnes' costumes are similarly eye-popping, and the special effects involving Aladdin's magic carpet are no less than amazing.

Handsome Adam Jacobs, who originated the role of Aladdin on Broadway, is re-creating his charming performance in LA. Isabelle McCalla makes a lovely Jasmine but Jonathan Weir is pretty one-note as Jafar. However, Michael James Scott makes a fabulous, hilariously sassy, and kinda gay Genie.

Over the top and "extra" though it may be in spots, Aladdin on stage offers some truly magical sights and sounds. 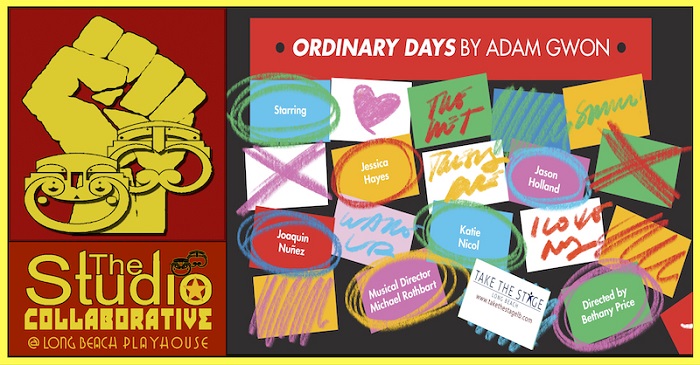 As much as I have grown to love LA, Long Beach and our local theatre scene, New York still remains my favorite city in the world. I wouldn't want to be there this time of year, frigid and partly frozen as it currently is, but Spring through Fall can be glorious.

The "city that doesn't sleep" has long inspired playwrights and other artists. Adam Gwon set his 2008 musical Ordinary Days there. Gwon's heartfelt show just had its local premiere at Long Beach Playhouse as part of the Playhouse's annual Studio Collaborative. Take the Stage Long Beach serves as this production's presenter.

Ordinary Days is a sung-through one act involving four main characters, an accompanist, and a chorus of five attractive young people. While reminiscent of such popular Jason Robert Brown works as Songs for a New World and The Last Five Years, Gwon clearly has his own distinctive, generally more optimistic voice.

The musical's central quartet is Deb, an overwhelmed NYU graduate student; Warren, a lonely art admirer; and Claire and Jason, a romantically-involved couple who have just moved in together. While Jason and Claire quickly face challenges in their newly altered relationship, Deb finds herself unexpectedly drawn to the "wierdo" Warren after he finds Deb's lost dissertation notes.

That's about it in terms of plot, but Gwon and director Bethany Price mine this scenario for its emotional and comedic riches. Similarly, primary cast members Joaquin Nunez (Warren), Jason Holland (Jason), Katie Nicol (Claire) and Jessica Hayes (the vocal and comedic standout as Deb) dive into the material.

Michael Rothbart provides excellent support as the show's musical director and unobtrusive accompanist. There were a few pitch issues with one cast member during the performance I attended, but God knows I've heard worse over the years. Kyra Baklayan, Greg Bystritski, Dane Jamieson, Damian Santana and Ava Tomassini are the black-clad, multi-talented chorus members. They sometimes cleverly play pieces of furniture or modes of transportation in addition to average New Yorkers on the street.

As is the case with many plays and musicals set in Manhattan, the city is something of an omnipresent character itself. Scenic designer Jonathan Torres has provided a colorful, impressionistic backdrop of the New York skyline. For any other Southern Californians longing to visit NYC, I recommend Ordinary Days as the next best thing this time of year.