Precode Lawyer On The Loose

Attorney For The Defense Is 1932's Full Court Press 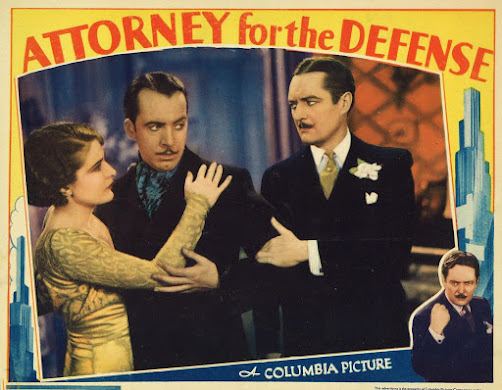 High-powered mouthpiece Edmund Lowe discards mistress Evelyn Brent and she spends the rest of 70 minutes trying to make him sorry for it. As with programmers done at fleet pace, there is love rivalry, a murder frame, then miraculous exposure for the guilty party, all done on Columbia discount terms. Moments linger: Dwight Frye being dragged off to the chair for a sock opener, smooth operating Lowe catching sleaze Bradley Page in Brent's love nest he's underwriting. Precode is accommodated, Attorney For The Defense a good one fewer have seen for having been out of circulation a long time. TCM has leased it, and Sony's Movie channel even ran the thing HD. 30's screen lawyering was status barely above rackets, and always there was hand-holding between "shysters" and the underworld. Practitioners were shown to have cash, full-service digs as in cook/servants, and revolving women in wait. Young men by the score must have gone home from pix like Attorney For The Defense to fill out law school applications. Lowe was known by 1932 as an angle player, having made a chump of military protocol in Flagg/Quirt comedies, plus wising off in civilian dress elsewhere. As expressed during blow-off of Brent, he'd rather have a cleansing Turkish bath than be kissed further by her lying lips. The courtroom dénouement is outlandish even by lax movie standards, but that's fun of this rough gem of a precode.

Precode Lawyer On The Loose